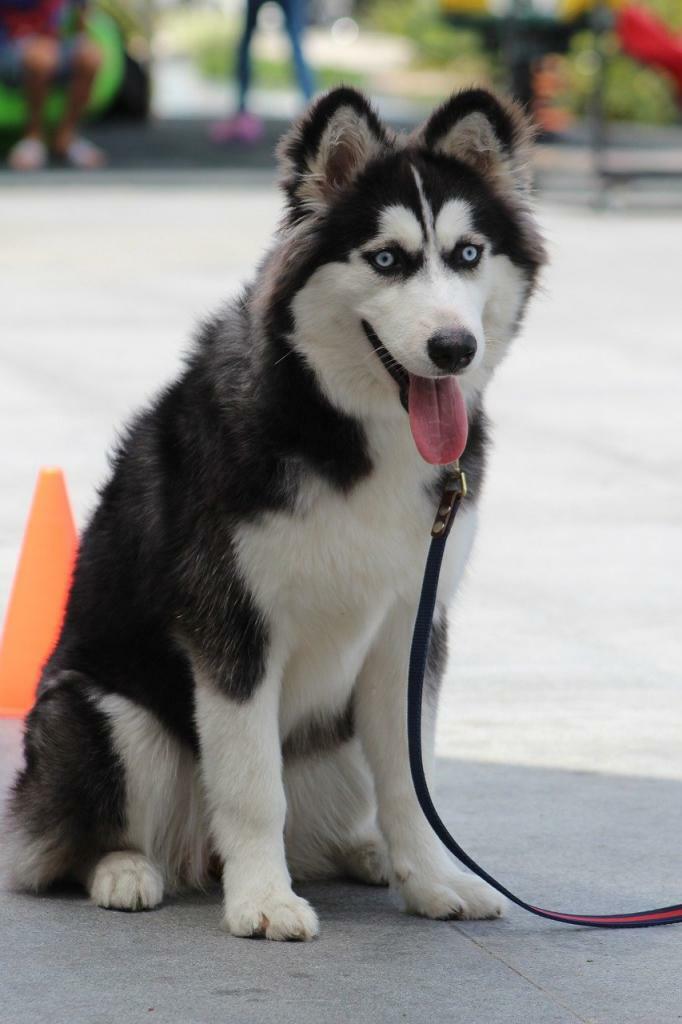 The Siberian Husky dog breed has a beautiful, thick coat that comes in a multitude of colours and markings. Their blue or multi-coloured eyes and striking facial masks only add to the appeal of this breed, which originated in Siberia.It is easy to see why many are attracted to the wolf-like appearance of the Siberian, but beware because this athletic and intelligent dog can act independently and pose a challenge for first-time dog parents. Huskies also put the “H” in Houdini and need a yard with a high fence that goes all the way to the ground to prevent escapes. Giving your Husky enough exercise may be easier said than done; however, it will reduce boredom and unwanted behaviours, such as escape attempts.It is important to remember that dogs of any breed can suffer from health problems throughout their lives. A good pet insurance plan can help you prepare to give your dog the care it needs at any age.

Depending on their climate, Siberian Huskies usually have little shedding, except at times of the year when their coat sheds, which means that they shed large amounts of hair at one time. This occurs about twice a year, or more if living in warmer climates, and when this happens, the breed becomes a heavy shedding dog for about three weeks.Siberian Huskies are not recommended for flat living, but some do quite well in flats if properly trained and exercised.Siberian Huskies are known as escape artists and have been known to wander away and disappear. They can jump fences, break leash chains, slip collars and find any other means of escape. They need a high fenced yard and the fence should be buried several inches below the ground to prevent the Husky from digging its way out.Siberian Huskies can be very destructive both indoors and out. If left indoors, the breed can destroy a house and cause a variety of damage. Outdoors, they enjoy digging and will dig up yards and flower gardens alike. A dog given a place to dig in the yard is much happier and so are you.Although they enjoy howling, Siberian Huskies rarely bark and will not become alert if someone enters your property. This makes them an unsuitable watchdog. Huskies are not a breed for a new or timid owner. They need a strong owner who maintains an alpha position in the household. Siberian Huskies are very curious and can get injured or lost while exploring something new. They generally get along well with children, although young children should never be left alone with any breed. They also get along well with people and do well in multi-dog households. Siberian Huskies were bred to need very little food to survive. This is still true today and the Siberian Husky does not need a high level of calories per day. It is important that you ask your Siberian Husky’s breeder what the recommended ration is and follow their advice, Huskies should not be allowed to run off leash during walks. Because of their beauty, Siberian Huskies are one of the most mistakenly purchased breeds. Many do not take into account their temperament and peculiarities and are often left with an unruly, though beautiful, dog. Many Siberian Huskies are lost, euthanised or surrendered to shelters due to owners’ lack of information. If you are thinking of buying a Siberian Husky, take plenty of time to educate yourself about the breed. Visit some Siberian Husky breeders or shelter dogs, read books, talk to other owners, and possibly foster a dog if you feel you can. If, after all your experiences, you feel you still want a Siberian Husky, take the time to decide whether you should adopt a rescue or a puppy. Follow your breeder’s advice and remember that this beautiful dog will make your life an adventure and not always a good one.To get a healthy dog, never buy a puppy from an irresponsible breeder, puppy mill or pet shop. Look for a reputable breeder who tests their breeding dogs to make sure they have no genetic diseases that can be passed on to the puppies and that they have a healthy temperament.

The Siberian husky is believed to have originated among the Chukchi, a tribe of nomadic Siberians. The breed’s history is relatively unknown, but DNA testing confirms that they are among the oldest dog breeds. We know that the Chukchi used dogs as a means of rapid transportation and that they interacted with the Chukchi as a family dog. Huskies often slept with children and provided warm, comfortable beds. The Siberian husky was imported to Alaska in 1908 and was used as sled dogs during the gold rush. They were used in the All-Alaska Sweepstakes, which is a 408-mile dogsled race, and they continue to be an active competitor in the Sweepstakes even today. Records indicate that the last Siberian Husky was exported from Siberia in 1930 when the borders were closed. by the Soviet government. The breed continued to thrive in North America. Although they changed slightly from their Siberian founding dogs, the Chukchi Sled Dog, they still retain many of the wonderful qualities of that breed. The Siberian Club of America was founded in 1938 and the Siberian Husky was recognized by the American Kennel Club in 1930 and the Canadian Kennel Club in 1939.