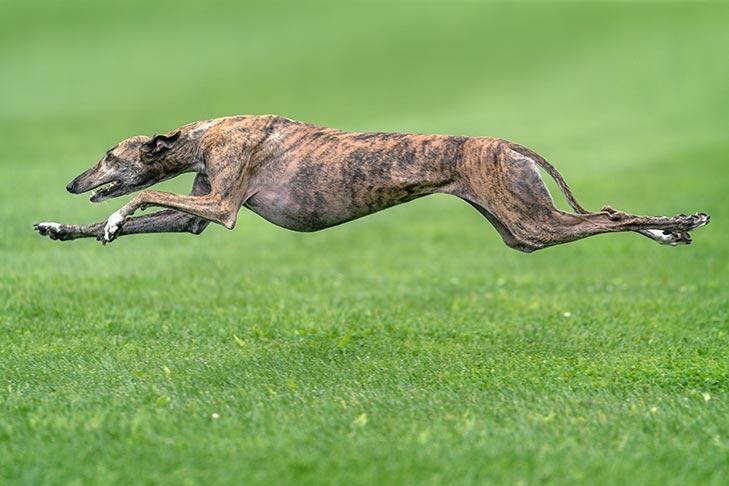 Greyhounds were originally bred as hunting dogs to chase hares, foxes and deer. Greyhounds can reach speeds of 40 to 45 miles per hour, making them the Ferraris of the canine world. As such, you are likely to find them retired and in the care of shelters and rescue groups. Today, greyhounds also participate in many other dog sports, such as lure coursing, conformation, obedience and agility. Beyond their grace and speed, people love them for their gentle and gentle nature. Breed fanciers often claim that these dogs have two speeds: the all-out sprint and the all-out couch. However, they are quite sensitive, both to extreme weather and to loneliness. They are not a dog that can be left alone in the house for many hours of the day. Give them the love, care and exercise they crave, and you’ll have an adorable, cuddly companion for life.AniMall24 recommends a large, spacious crate to give your large Greyhound a place to rest and relax. You should also buy a dog toy to burn off your pup’s energy.

Although a greyhound puppy is a lovely addition to your family, many sweet adult greyhounds are available for adoption after their racing days are over. Each year, many “retired” racing greyhounds are abandoned, euthanized or sold to laboratories, but they can adapt wonderfully to life at home and provide you with many years of companionship. Before you put your name on a waiting list for a greyhound puppy, check out the world of greyhound rescue.Because of their fine coat, greyhounds can get chills. If you live in a cold climate, buy a coat for your dog to wear in snow or rain.A greyhound should never be allowed to run off leash except in a securely fenced area. Greyhounds have a strong prey instinct and will take off after a rabbit or squirrel before you see them.When greyhounds are not socialised – exposed to many different people, places and situations – they can become timid and have trouble adjusting to changes in schedule or environment. Take the time to socialise your dog or puppy.Greyhounds are generally a loving and affectionate breed with their people. Usually this friendliness extends to strangers, but they can be aloof with some or all strangers.Although many believe that this breed is made to run and has the destructive energy to go with it, that couldn’t be further from the truth. Greyhounds are generally docile and calm, and are first class sleepers. They do well in flats and houses with small yards because of their low energy indoors.Muzzling greyhounds, especially retired racing greyhounds, is a common practice. Greyhounds nip at other dogs and can injure smaller dogs and animals if their prey drive gets the better of them. Many rescues recommend muzzling adopted greyhounds, at least until they settle into their new homes and you have a better idea of their temperament.Greyhounds have a low to medium moult, depending on the time of year and the individual dog, and require minimal grooming. To get a healthy dog, never buy a puppy from an irresponsible breeder, puppy mill or pet shop. Look for a reputable breeder who tests their breeding dogs to make sure they have no genetic diseases that can be passed on to puppies and that they have a sound temperament.

The greyhound is an ancient breed, originating in the Middle East and North Africa, which has earned the admiration of many cultures. Greyhounds were mentioned by the Greeks, depicted in art by the Egyptians, praised by a Roman poet and are the only breed of dog mentioned in the Bible. They were so respected for their hunting prowess that the laws of the time protected royal hunting grounds by prohibiting anyone living within 10 miles of the king’s forests from owning a greyhound, and the greyhound’s popularity continued to grow in England, thanks to the popularity of coursing (the sport of chasing prey) and racing. Spanish explorers and British settlers took them to America, where they also thrived, chasing rabbits and coyotes on the wide plains. The first official greyhound racing took place in 1886, and in 1906 the National Coursing Association of the United States was founded. Greyhound racing took off and is now popular in many states, although it is a controversial sport because many dogs are abandoned, euthanised or sold to laboratories if they do not do well on the track.