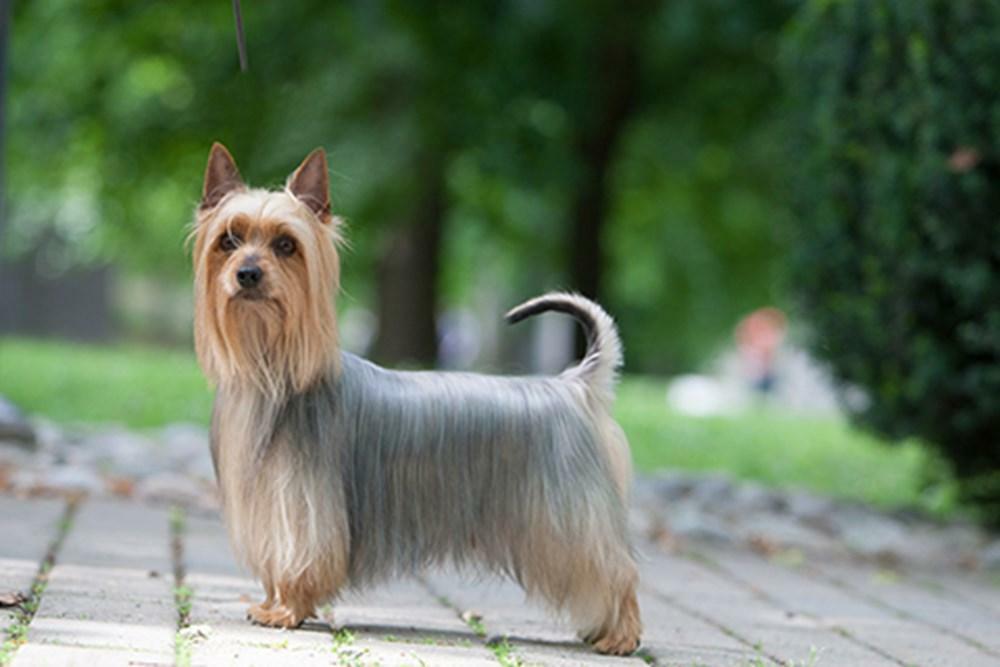 The Silky Terrier dog breed exemplifies the expression “small dog, big personality”. Weighing only 2.5 to 3.5 kilos as adults, they are hardy and self-confident, perhaps because of their heritage as hunters of small prey. Although they are purebred dogs, you may find them in the care of shelters or rescue groups. Remember to adopt. Underneath the Silky’s feisty personality is a loving companion dog who loves to be close to his person. He can even adapt to life in a flat, as long as he gets plenty of exercise. Just be aware that neighbours may not like this breed’s tendency to bark. If you can provide plenty of love, attention and physical activity, you will have a happy dog who will not want to be separated from you.

Silky Terriers are active dogs that need exercise and mental stimulation. This does not mean strenuous walks or hours of retrieving, but it does mean providing them with more activity than couch rubs.Although they need exercise, they can be good flat or condo dogs.Silkies have a strong prey drive and will chase cats, squirrels, rodents, and sometimes other dogs. A Silky may not be the best choice if you have other small pets. Also, keep your Silky on a leash when in unsafe areas to prevent it from disappearing into the wild blue sky when something small and furry passes by.Silkies like to be with their families and are happiest when they can spend all day in your company.Despite their long fur, Silkies are fairly easy to care for. Despite their long fur, Silkies are fairly easy to care for, but they do require a little grooming: a thorough brushing two or three times a week and a monthly bath. To save your flowerbeds, consider another breed or train your Silky to dig in a specific area. It is much easier to channel the instinct than to suppress it.Barking, another terrier trait, is a pastime much enjoyed by Silkies. Although you can teach your Silky the “quiet” command, he will still bark when he deems it necessary. On the positive side, Silkies make excellent watchdogs.Silky Terriers can make good family dogs, but because of their outrageous personality, children should be about 10 years of age or older.Although generally friendly, Silkies can be territorial and aggressive with other dogs if not properly socialised.A Silky should not be left unattended in a yard. It is small enough to be considered prey by larger wild animals, terrier enough to dig its way around and silky enough to get into mischief.To get a healthy dog, never buy a puppy from an irresponsible breeder, puppy mill or pet shop. Look for a reputable breeder who tests their breeding dogs to make sure they are free of genetic diseases that can be passed on to puppies and that they have a sound temperament.

The Silky Terrier originated in Australia in the 1890s, when breeders crossed imported Yorkshire Terriers with their native Australian Terriers. Some of the pups looked like Yorkies, some looked like Australian Terriers and some looked like today’s silky ones, with a size and coat between the two parent breeds. The silky-looking dogs were interbred until the pups had, unsurprisingly, silky features. In 1906, Australian fanciers developed a breed standard – written guidelines for how the breed should look, move and act – in Sydney, New South Wales. In 1909, another standard was drawn up in Victoria. The two standards were not completely in agreement, mainly in the preferred weight and the type of ear. The two fields were compromised and a new breed standard came out in 1926. The breed has had several names: initially, it was called the Sydney Silky Terrier. In 1955, it became the Australian Silky Terrier (still the official name of the breed in Australia). In the US, the name was changed to Silky Terrier.

5 benefits of dog ownership for children