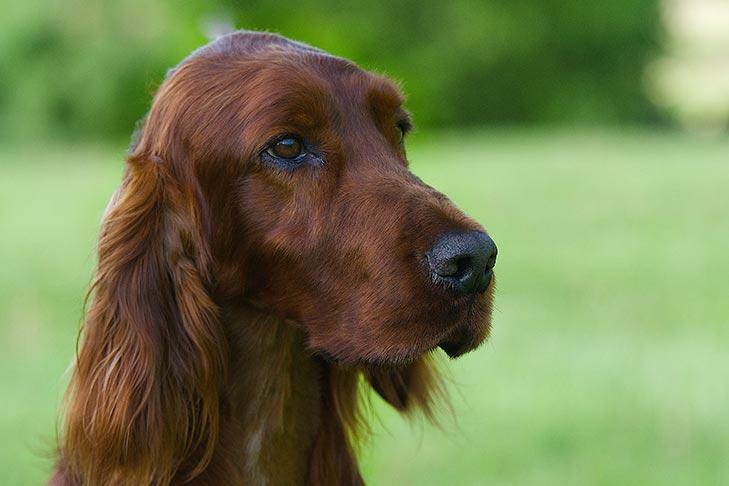 The Irish Setter originated as a hunting dog in its native Ireland, and the popularity of the dog breed soon spread, thanks to the beauty of its rich mahogany coat and its enthusiasm as bird dogs.they are friendly, mischievous and curious, with high energy levels. This is a bold and boisterous family friend with the potential to do well in many canine sports and activities.AniMall24 recommends a dog bed to give your medium sized Irish Setter a good night’s sleep. You should also buy a dog brush and massager for your long haired puppy.

Irish Setters are very attached to the people in their lives and can suffer from severe separation anxiety. They are very unhappy when left alone for more than a few hours and this unhappiness often results in destructive behaviour. The Irish Setter is not a good outdoor dog and needs to be kept indoors, close to its family.The high-energy, athletic Irish Setter needs space to run and the best place for this is a large, fenced yard.The Irish Setter needs plenty of exercise and should be exercised twice a day for at least half an hour at a time.The Irish Setter needs obedience training to channel its mischievous and sometimes stubborn nature.The Irish Setter gets along very well with other animals and children. However, it is important to properly socialise your puppy, regardless of the breed’s temperament or living situation. He may not have children or other pets now, but that could change. Irish Setters need to be brushed daily or every other day to prevent their long, silky coat from matting. They have a moderate shedding, so they will have some hair in their home, especially during shedding seasons.Irish Setters do not mature quickly. Some dogs settle down by the age of 2 years, but others remain puppies throughout their lives.Irish Setters are naturally curious and will get into anything they can find or reach. This trait can also make training difficult, as they generally find it hard to maintain concentration. To get a healthy dog, never buy a puppy from an irresponsible breeder, puppy mill or pet shop. Look for a reputable breeder who tests their breeding dogs to make sure they have no genetic diseases that can be passed on to the puppies and that they have a sound temperament.

It is not surprising that this handsome redhead comes from Ireland, a country famous for its fine and beautiful dogs. The Irish setter seems to have developed there in the 18th century, probably as a result of a combination of English setters, spaniels, pointers and gordon setters. Those early Irish setters were sometimes called red spaniels – a clue to their heritage, perhaps – or modder rhu, which is Gaelic for “red dog”. Often, they were white and red rather than the solid dark red we see today. Some, described as “hail rain” dogs, had red coats dotted with small white spots. The Irish Earl of Enniskillen may have started the fashion for solid red dogs. In 1812, he had no other type in his kennel. Other Irish breeders of the time who favoured red dogs were Jason Hazzard of Timaskea in County Fermanagh and Sir St. George Gore.A dog named Elcho was the first Irish Setter imported to the United States. He arrived in 1875 and became a star not only in the show ring but also in the field. The first Irish Setter registered by the American Kennel Club was Admiral, in 1878, and they quickly became one of the most popular breeds in the United States and a favourite in the show ring. Between 1874 and 1948, 760 Irish Setters became conformation champions, while only five became field champions. This caused alarm among some fanciers of the original breed, and in 1940 Field and Stream magazine called for the breed’s resurrection as a working dog. The popularity of the Irish Setter soared in the 1960s and 1970s, thanks to books and a film featuring an Irish Setter named Big Red, as well as the presence of the Timahoe Irish Setter King in the White House during the Nixon administration. Today, the Irish Setter is ranked 68th out of 155 breeds and varieties recognised by the AKC.