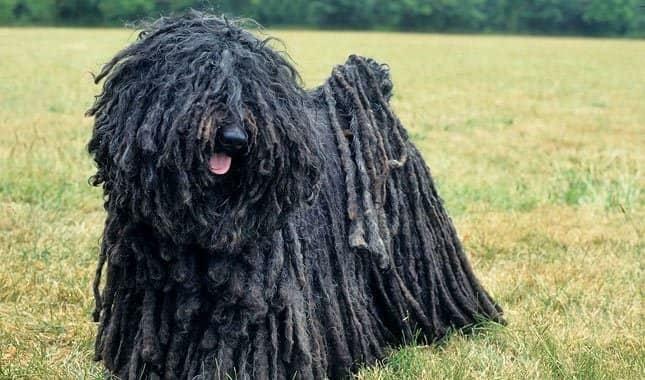 The Puli is a hard-working herding dog and family companion. Energetic and lively, this mop-like dog breed from Hungary looks much larger than it is due to its distinctive coat. Remember to adopt. Thanks to its self-confidence and intelligence, the Puli will have no problem being the centre of attention in your home. These dogs are as affectionate as they are energetic. But novice pet parents should be careful, as all that energy needs a place to go in the form of vigorous exercise and plenty of playtime. Although this breed’s coat is quite allergy-friendly, it has specific grooming requirements. But if you can provide a puppy with plenty of love, physical activity and extra coat maintenance, you will be rewarded with a furry, loving and loyal family member who will attract all eyes with his unique appearance.

The Puli is an ancient breed with a history dating back at least 2,000 years. Some believe that a dog similar to the Puli already existed 6,000 years ago or more; others believe that the Puli derived more recently from the Tibetan Terrier.Around the turn of the century, teams digging for oil in what is now known as Iraq – once home to the ancient civilisation known as Sumer – came across the grave of a man who had been buried with a medium-sized dog and a sheep. Among the artefacts in the grave, they found a long, thick knot of hair that was almost white with age. The composition of this hair was very similar to that of today’s Puli. It is believed that this man was a shepherd, buried with his favourite sheepdog and a sheep, and there are indications that the Sumerians used Pulik or Puli type dogs to herd sheep thousands of years ago. Clay plaques found in excavations at the city of Eridu reveal Sumerian animal laws. One of them has lines referring to a Puli and a Komondor, another herding dog. Also at the same excavation site, an intact statuette of a Puli was found in the crypt of an eight-year-old girl.1,100 years ago, members of the Magyar tribe brought the Pulik to Hungary, where they became highly prized for their herding ability. Many shepherds preferred black dogs because they were easier to spot among the white herds. It is believed that the Puli was used to herd and drive the sheep, while the larger Komondor was used to guard the flocks. However, as much as they valued their dogs, they were ruthless in culling those that were not as intelligent or capable of performing their duties. Many believe that this selection is the reason why the Puli is such an intelligent and healthy breed today. In the 19th century, Hungarian shepherds determined the best characteristics of these small herding dogs, and tried to breed specifically to produce high quality animals. At the end of the 19th century the first description of the Puli was written, but by then the need for this shepherd dog was diminishing, as were its numbers. In 1912, Dr. Emil Raits, professor at the Hungarian University of Veterinary Medicine, initiated a programme to save the Puli from extinction. Adolf Lendl, director of the Budapest Zoo, joined the efforts. Together they remodelled part of the zoo to create an experimental breeding programme and an exhibit. The programme was expanded and they eventually named their kennel Allatkert. In 1915, the enthusiasts drafted the first Puli breed standard. In 1924, the Fédération Cynologique Internationale approved this standard. Initially there were three categories of Puli: the ancestral (working) Puli with a shaggy coat; the fancy or show Puli; and the dwarf Puli. In 1935, four sizes of Puli were recognised: the police Puli (19.7 inches in height); the working or medium Puli (15.7 to 19.7 inches); the small Puli (11.8 to 15.7 inches); and the dwarf, miniature or toy Puli (11 inches or less). At this time, owning a Puli, Komondor or other Hungarian native breeds became a source of pride in Hungary. Around the same time, the U.S. Department of Agriculture became interested in the Puli and, in 1935, imported four purebred Pulik to participate in sheepdog trials held at the Department’s facility in Beltsville, Maryland. The Puli are said to have scored high in these trials, although the results were never published, and when World War II broke out, the trials were discontinued and the Pulik were sold to professional breeders. The original four dogs and their progeny are believed to be the first Pulik in the United States.World War II was devastating for Hungary and also for dog breeders, especially those in Europe. Food was scarce and there were no medical supplies. The breeders had to give their valuable dogs to people in other countries, and the Pulik left behind were often killed by bombs or shot by German or Russian soldiers. If the breed had not been so popular before the war, it would probably have become extinct by now, just as the Puli survived the harsh plains of Hungary, beat the odds and, after the war, the number of Pulik in Hungary grew. In 1959, the Hungarian Puli Club created a Puli breed standard that eliminated the toy and police size Pulik and included all remaining sizes in one category. By the 1960s, the number of Pulik in Hungary had reached pre-war numbers, the Puli was accepted for registration by the American Kennel Club in 1936, and the Puli Club of America was formed in 1951.