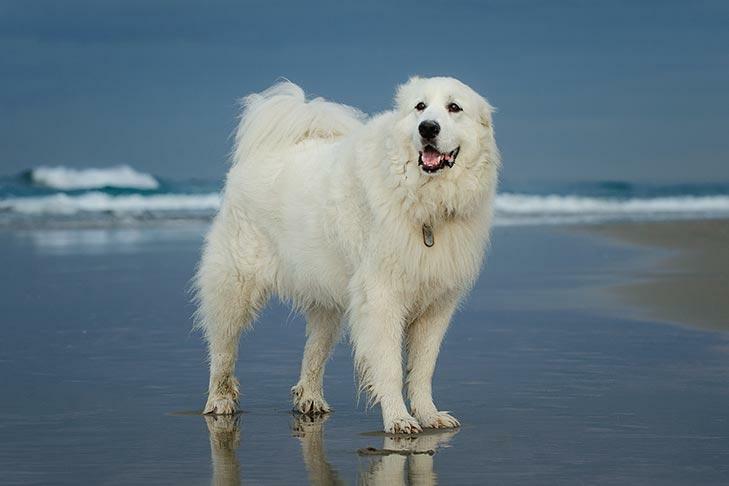 The Great Pyrenees dog breed’s purpose in life is to protect sheep, goats, cattle, people, children, grass, flowers, the moon, lawn furniture, bird feeders and any real or imagined predator that might invade their personal space. Oh, yes, and to give, give, give, give unconditional love. Although these are purebred dogs, you may find them in the care of shelters or rescue groups. Remember to adopt. Don’t buy if you want to take a dog home.Anyone who has seen this stunning white dog is smitten.What’s not to like? They have a strong build, a beautiful thick coat, and exude elegance and majesty. One look and you can see the intelligence and steady temperament that many look for in a good family dog.

The Great Pyrenees is fine in flats because he is mellow. If you want a dog that can be walked off leash, it may not be the dog for you because of its independent thinking and roaming tendencies. On the plus side, the Great Pyr only requires about 30 minutes of brushing a week.a Pyr can be difficult to train because of its ability to think on its own. It is not a good match for new or shy dog owners, because it needs consistency and a strong owner to socialise and train it with positive reinforcement.It is a wonderful watchdog for the family, but needs socialisation so it does not become shy or aggressive with both dogs and people.It thrives with its family and must live indoors. He can become bored and destructive if separated from his family or left to live in the backyard.A Great Pyrenees is usually affectionate and gentle with younger creatures, making him a wonderful dog for families with children.He is a hard barker and is not recommended for homes where his barking may disturb others.Great Pyrenees do best in cooler climates, but should not be clipped in hot weather. His coat insulates him and keeps him cool, so when you shave his coat you compromise his natural protection from the sun.He needs exercise, but not as much as you might think – 20 to 30 minutes a day is fine.He has a double dewclaw which should not be removed but should be kept trimmed.To get a healthy dog, never buy a puppy from an irresponsible breeder, puppy mill or pet shop.

The Great Pyrenean Sheepdog is native to the Pyrenees mountain range, which forms a natural border between France and Spain. It is known by various names: Great Pyrenees in the United States and Canada, Pyrenean Mountain Dog in the United Kingdom and in most of Europe. Its ancestors are believed to have arrived in the Pyrenees around 3000 BC. At first, the Great Pyrenean was considered to be a dog owned by peasants. But in 1675, the Dauphin of the court of King Louis XIV declared the Great Pyrenean to be the royal dog of France. This led to the French nobility acquiring dogs of the breed and using them as guardians of their estates. It is credited with the creation of the Newfoundland Landseer, following a cross between the Great Pyrenees and the Newfoundland, and throughout the 19th century, the breed gained popularity throughout England, Europe and the United States. It was introduced into the St. Bernard breeding programme in Switzerland in an effort to re-establish the number of dogs in the famous hospice where the St. Bernard originated. However, in the Pyr’s homeland, the breed began to deteriorate due to unscrupulous breeding practices. The two world wars took their toll on all dog breeding; fortunately, several Great Pyrenees were imported to the United States before the European continent was effectively closed due to World War II. After the war, breeders strove to restore the breed to its former glory, and today the Great Pyrenees is a much loved and admired dog.