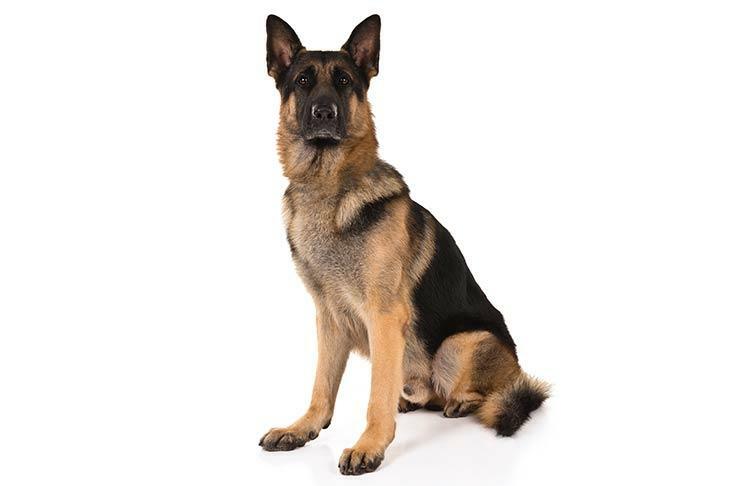 The German Shepherd Dog is one of the most popular dog breeds in the United States, for good reason. They are intelligent and capable working dogs. Their devotion and courage are unmatched. The breed is also called the Alsatian. Despite their purebred status, you can find German Shepherds in shelters and breed-specific rescues. So remember to adopt. GSD’s excel at almost everything they are trained to do: guide and assistance work for the disabled, police and military service, herding, search and rescue, drug detection, competitive obedience and, last but not least, faithful companionship.Any type of dog can develop arthritis or slow down with age. AniMall24 recommends giving your dog Glyde Mobility Chews to keep his joints healthy.

The German Shepherd is not the breed for you if you are away from home frequently or for long periods of time. When left alone, they may become anxious or bored and are likely to express their concern in ways you don’t like, such as barking, biting and digging.German Shepherds are active, intelligent dogs. They should be kept busy learning, playing and working. Daily exercise, both physical (such as jogging and Frisbee) and mental (such as training sessions), is a must.German Shepherds can be aloof and distrustful of strangers. To raise a social and well-behaved dog, expose your German Shepherd puppy to many experiences, places and people. Obedience training, starting with puppy classes, is important to get them used to other people and dogs, as well as to teach them basic dog manners. In fact, their nickname is “German mute”. Brush them several times a week and buy a good hoover. Crate training is not only a wonderful way to housebreak a puppy, but it also teaches him to be calm and happy when separated from his owner. This is especially important for the German Shepherd, who sometimes suffers from separation anxiety or extreme anxiety when left alone.They have a reputation for being a great watchdog – and they are – but the German Shepherd should never be chained or tied up just to stand guard. No dog should be; this leads to frustration and aggression. The German Shepherd is happiest living indoors with the family, but with access to a large, fenced yard, where it can burn off some of its natural energy.You can find dogs of almost any breed, including German Shepherds, at your local shelter or breed-specific rescue centre. Consider adopting before looking for a breeder.

The German Shepherd is a relatively new breed, dating back to 1899, and owes its existence to one man: Captain Max von Stephanitz, a German cavalry racing captain with the goal of creating a German breed that would be unrivalled as a herding dog.Centuries before von Stephanitz came along, herders in Germany, as elsewhere in Europe, relied on dogs to drive and protect their flocks. Some dogs were legendary for their prowess, and shepherds would travel for days to breed their bitches to a remarkable sire. In 1898, von Stephanitz retired from military life and began his second career, and what would turn out to be his passion: experimenting with dog breeding to create a superior German Shepherd Dog. Stephanitz studied the breeding techniques of the British, known for their exceptional herding dogs, and travelled throughout Germany, attending dog shows and observing German-type herding dogs. von Stephanitz saw many good herding dogs, dogs that were athletic, or intelligent, or capable. One day in 1899, von Stephanitz was visiting a dog show when a wolf-like dog caught his eye. He immediately bought the dog, named Hektor Linksrhein. The powerful physique and intelligence of the dog, later renamed Horand v Grafeth, so impressed von Stephanitz that he formed a society – the Verein fur deutsche Schaferhunde – to found a breed with Horand’s descendants. He was determined that his breed should remain a working dog, and decided that the dog’s future lay in police work and military service, and making good use of his military connections, von Stephanitz convinced the German government to use the breed. During World War I, the German Shepherd served as a Red Cross dog, messenger, rescuer, guard, supply carrier and sentry.Although German Shepherds arrived in the United States before the war, it was not until the war that the breed became popular in the U.S. The Allied military noted the dog’s bravery and intelligence, and several dogs went home with these soldiers.One of these dogs was a five-day-old puppy taken from a bomb-ravaged kennel in France by an American corporal from Los Angeles. The corporal took the puppy home, trained it and turned it into one of Hollywood’s most recognisable four-legged stars: Rin Tin Tin, who appeared in 26 films and helped popularise the breed in the US. Although the Allies were impressed by the German dogs, they were not so happy with the dog’s German roots. In 1917, the American Kennel Club (AKC) changed the breed name to Sheepdog and in England, the dog was renamed the Alsatian Wolfdog, after the Franco-German border area of Alsace-Lorraine. The AKC reverted to the original German Shepherd Dog name in 1931; it took until 1977 for the British Kennel Club to do the same.Von Stephanitz remained closely involved in the development of the breed and, as early as 1922, was alarmed by some of the traits that were appearing in the dogs, such as bad temperament and a tendency to decay. He developed a strict quality control system: Before a German Shepherd was bred, it had to pass numerous tests for intelligence, temperament, athletic ability and good health. In the United States, dogs were bred to win dog shows, and breeders placed more emphasis on the dogs’ appearance and the way they moved. At one point, police departments and the US military began importing German Shepherd working dogs because domestically bred German Shepherds failed performance tests and suffered from genetic health problems.