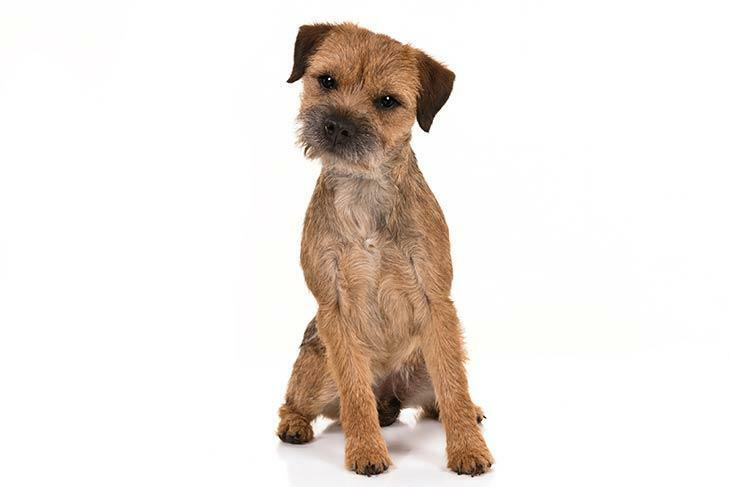 The alert and good-natured Border Terrier was originally bred to assist in fox hunts, bringing them out of their hiding places and out into the open for the hounds to chase. Today, they are great family members who adore their humans. Although they are purebred dogs, some may end up in the care of shelters or rescues. Consider adopting them if this is the breed for you. Border Terriers still have a powerful drive to hunt and dig, as well as the energy level that allowed them to keep up with hunters on horseback. These traits can make them an annoying pet to some humans; to others, Border Terriers are wonderful companions who play a lot and love more. They can adapt to apartment living, as long as they get plenty of exercise. Provide this puppy with plenty of physical activity and you will have a loyal and loving best friend for life. AniMall24 recommends a good carrier for traveling with your small Border Terrier. You should also buy a dog toy to burn off your puppy’s high energy.

Border Terriers put on weight easily, so be sure to measure your Border’s food and give him at least half an hour of vigorous exercise each day. Border Terriers thrive when they are with their people and are not meant to live outdoors with little human interaction. When left to their own devices, they can be noisy and destructive. These escape artists will find their way out of a fenced yard if given the time and opportunity. They have been known to climb and dig under fences, and once out they have little street sense to keep them from running out in front of cars. Border Terriers have a high pain threshold. If your dog is sick, the only sign may be a change in behavior, such as the dog becoming withdrawn or quiet. Border Terriers have a natural instinct to dig. Instead of fighting it, give your Border Terrier a place of his own to dig or put his digging impulse to work with fun games. Border Terriers are active and bouncy. They love to jump on people to greet them. The Border Terrier’s coat needs weekly brushing and periodic grooming – removing dead hair by hand or with a grooming tool – to maintain its characteristic rough texture. Border Terriers love to chew. Some will stop chewing inappropriate objects, such as furniture and shoes, but others enjoy chewing throughout their lives. Giving them plenty of appropriate chew toys is the best way to avoid costly replacements and unnecessary vet bills. Border Terriers are not very noisy, but they will bark to alert you to anything unusual, and can become nuisance barkers if they get bored. Border Terriers have a strong prey instinct and will chase, attack and even kill neighborhood cats, squirrels or other small animals. They will also chase small pets such as rabbits, mice or gerbils. Because of their tendency to chase, make sure your yard is well fenced and do not let your Border off leash in an unfenced area. Border Terriers get along well with other dogs and with family cats if the cat has been raised with the Border Terrier or has lived in the house before the Border Terrier. Border Terriers can be excellent companions for children, but they can be rambunctious, especially when young, and can unintentionally hurt small children. To get a healthy dog, never buy a puppy from a puppy mill, pet store or breeder that does not offer health guarantees or clearances. Look for a reputable breeder who tests their breeding dogs to make sure they are free of genetic diseases that can be passed on to puppies and breeds for a healthy temperament.

The Border Terrier originated in the north-east of England, near the Scottish border, during the 18th century. It is the result of the never-ending battle between farmers and foxes. The Borders were built to have a long, narrow, flexible body, the better to squeeze through narrow holes and flush foxes out of their hiding places, and legs long enough to follow horses during a fox hunt. Of course, they had plenty of stamina, a weather-resistant coat and a thick, loose skin that was not easily punctured by the teeth of their fox adversaries. Among the earliest evidence of the breed is a painting by Arthur Wentworth in 1754 showing two Border Terriers. Although prized in the border country of England for its fearless and relentless character, the Border Terrier was little known elsewhere. He would probably have been seen at agricultural shows in Northumberland in the late 19th century, but was generally ignored by dog fanciers until the early 20th century. In 1920, he was recognised by the Kennel Club of England and a breed club was formed. The first registered Border Terrier in the United States was Netherbyers Ricky, in 1930. For most of its existence, the Border Terrier has been an unknown, and its people prefer to keep it that way if it means protecting it from the ravages of popularity. It currently ranks 81st out of 155 breeds and varieties registered by the American Kennel Club.