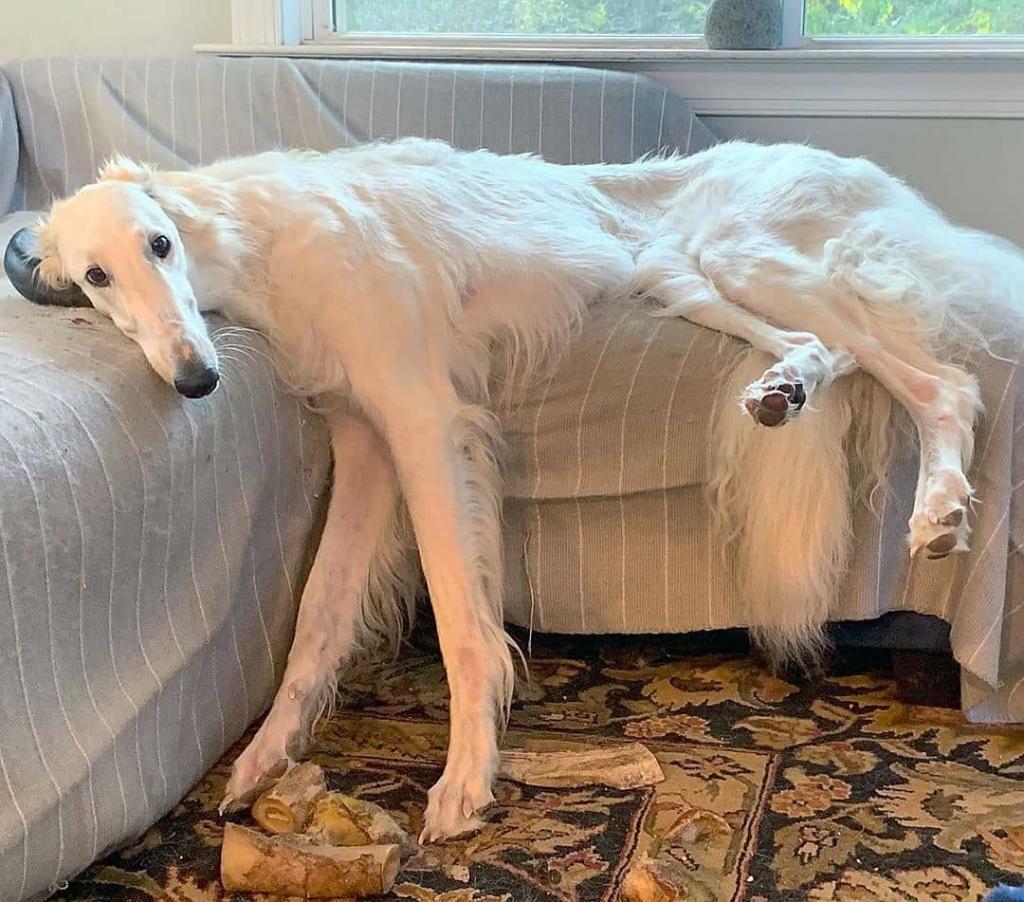 The Borzoi dog breed was developed in Russia as a hunting dog. These hounds hunted in teams of three to chase rabbits, foxes, and wolves. They later became popular as royal companions throughout continental Europe. Although they are purebred dogs, you may find them in the care of shelters or rescue groups. Consider adopting them if this is the breed for you. Borzois are calm family dogs that can even adapt to apartment living, despite their large size. However, they do not adapt well when left alone for long periods of time during the day. This sensitive breed needs companionship. Their beautiful coat also sheds a lot and requires some maintenance on your part. With a Borzoi you will have a great couch companion, but you will have to work hard to meet the breed’s needs. AniMall24 recommends a good large, roomy crate to give your large Borzoi a place to rest and relax. You should also buy a dog wormer for your pup with lots of shedding.

Borzoi are sighthounds and will chase anything that moves. They should never be allowed to run loose unless in a safe area. Borzoi can be sensitive to medications, especially anesthetics, due to their lack of body fat. Make sure your veterinarian is aware of this. The drug Ropum (Xylazine) should never be used on a Borzoi. Also, avoid exercising them on lawns that have recently been treated with fertilizers, insecticides, herbicides or other chemicals. Borzoi can be picky eaters. Borzoi can be prone to bloat. Feed them frequent small meals and avoid giving them a lot of exercise after eating. Borzoi can be skittish around children and should be introduced at an early age if they will be in frequent contact with them. Borzoi bark infrequently and do not have a strong guarding instinct. They do not make good watchdogs, as they cannot be trusted to raise the alarm when they see an intruder. They can live with cats and small animals if introduced to them at an early age. Some Borzoi only follow the “no chase” rule indoors and cannot resist the instinct to chase a running cat if it is outdoors. The Borzoi is not a common breed, so it may be hard to find a breeder who has kittens. Be patient. To get a healthy dog, never buy a puppy from an irresponsible breeder, puppy mill or pet store. Look for a reputable breeder who tests their breeding dogs to make sure they have no genetic diseases that can be passed on to the puppies and that they have a healthy temperament.

Once known as the Russian Wolfhound, the written history of the Borzoi dates back to 1650, when the first breed standard was written in its native Russia. Bred for hundreds of years by Russian nobles, the Borzoi is believed to have developed from the early Russian sighthound, the Tatar hunting hounds and the Owtchar, a tall shepherd dog. The hunts of the nobles were quite a spectacle. More than a hundred borzoi, hunted in trios of one female and two males, and an equal number of hounds, which were used to search for and flush out the prey, could take part in them. Once the wolf was sighted, the hunters would release their dogs to capture, immobilise and restrain it. After ceremoniously binding and muzzling the wolf, the hunters would sometimes release it to hunt it again another day. Such lavish hunting expeditions were commonplace until 1861, when the serfs were emancipated and the nobles could no longer count on an unlimited workforce. By 1873, there were few Borzoi left, which alarmed those who admired the beauty and speed of the breed. Russian fanciers formed the Imperial Association to protect and promote the breed’s characteristics, and the bloodlines of many Borzoi in America can be traced back to dogs from the kennels of Imperial Association members. Members of the association included Grand Duke Nicholas, uncle of Tsar Nicholas II, and Artem Boldareff, a wealthy landowner. Unfortunately, this association with the aristocracy was lethal. Many Borzoi were slaughtered after the Russian Revolution of 1918 for this reason. The breed was saved only because many had been given as gifts to royalty from other countries, such as Queen Victoria and Alexandra, Princess of Wales, or had been imported by people interested in the breed. The first Borzoi known to have been imported into the United States was named Elsie, and was bought in Britain by a Pennsylvania man named William Wade. Poor Elsie was apparently not very attractive, being described as “small, light and weedy”. “Another American, C. Steadman Hanks, visited Russia in the 1890s and imported Borzoi directly from his home country to establish his Seacroft Kennel. The first Borzoi registered with the American Kennel Club was Princess Irma in 1891. In 1903, Joseph B. Thomas contributed to the establishment of the breed in America by making three trips to Russia to purchase dogs from the Perchino kennel of Grand Duke Nicholas and the Woronzova kennel of Artem Boldareff. In the same year the Borzoi Club of America, then known as the Russian Wolfhound Club of America, was formed. In 1936, the name of the breed was changed from Russian Wolfhound to Borzoi. Today, there is little difference between the Borzoi in your parlour and his ancestors in Mother Russia. It is still the same tall, glamorous hound that was one of the great treasures of Tsarist Russia. The Borzoi ranks 96th out of 155 breeds and varieties registered by the AKC.

Exclusive Survey: These Are the Greatest Benefits of Pets