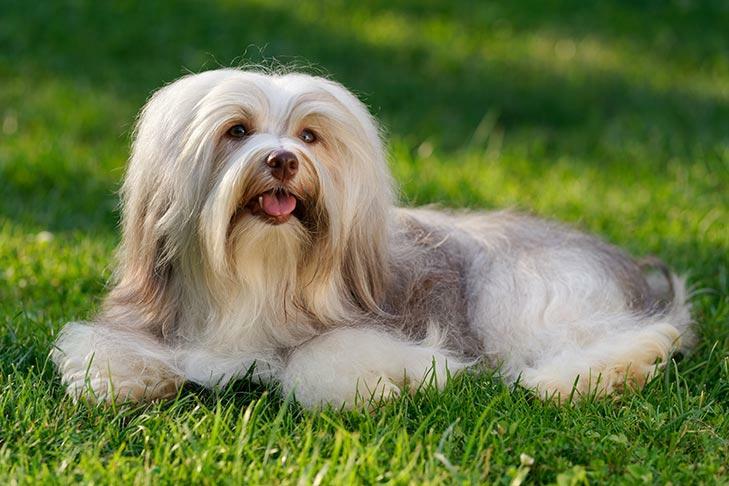 The Havanese breed of dog has won many admirers with its long silky coat, expressive eyes and cuddly size. Bred as a companion dog for the Cuban aristocracy in the 19th century, they have earned the nickname “velcro dog” because of how attached they are to their owner’s side.although they are purebred dogs, you can still find them in shelters and rescues. Remember to adopt. Don’t think of this little dog as just a lap dog; the Bichon Havanese is trainable and surprisingly energetic, and has excelled in dog sports and dog careers ranging from circus performers to assisting people with disabilities. They adore their humans and will not tolerate long periods of time alone at home. Make sure your dog has constant companionship and you’ll have an intelligent, furry family member who is eager to please.

The Havanese is a companion dog that thrives on being with its family. It can suffer from separation anxiety when left alone, and does best when someone is home during the day to keep it company.Although they generally outgrow it, it is quite common for Havanese puppies (among other breeds) to eat their own faeces. Pick up your puppy’s poop right away so he cannot indulge in this disgusting habit.The Havanese’s long, silky coat is beautiful, but requires regular brushing and grooming. Many owners prefer to cut it short, but if you want to expose your dog, you will have to leave it long and invest a good deal of time in grooming, or money in paying a groomer. Another reason to keep it long: If you live in a warm climate, the long coat helps keep your dog cool. The Havanese does well in all types of housing, from flats to houses with large yards. But he is likely to bark when he sees someone passing by or hears a strange noise. The good news is that he doesn’t bark just to hear his own voice.The Havanese loves to watch the world from above, and will climb on the backs of sofas and tables to watch the day go by.Paper is a favourite toy of the Havanese, and this clever little breed will go out of his way to find it, even sniffing the jackets of his guests. Toilet paper, which can provide hours of shredding pleasure, is a special treat. Toss him a roll and your house will soon look like it’s been attacked by Halloween pranksters.The Havanese needs as much exercise as a larger dog. To get a healthy dog, never buy a puppy from an irresponsible breeder, puppy mill or pet shop. Look for a reputable breeder who tests their breeding dogs to make sure they have no genetic diseases that can be passed on to the puppies and that they have a sound temperament.

After Columbus claimed Cuba for Spain in 1492, Spanish settlers began to arrive on the island. These dogs interbred and, isolated from other dogs by island life and, later, by trade restrictions imposed on Cuba by Spain, began to develop into the bichons we know today. Their distinctive coat was thick and silky, which helped insulate the dog from the tropical sun (the coat is like a thread of raw silk, profuse, but extremely light and soft, and insulates from tropical rays in the same way that yards of silk sari protect women in India).In the early 19th century, Havanese adorned the laps of many aristocratic families in Cuba. European travellers who fell in love with the breed took dogs to England, Spain and France. The breed became fashionable in Europe in the mid-19th century, and Queen Victoria and Charles Dickens were among its well-known fans at the time. At one point, the Bichon Havanese was almost extinct, even in its native Cuba. However, a few Cuban families continued to breed and keep the dogs, and with the Cuban Revolution in 1959, 11 Havanese were brought to the U.S. in the arms of their owners.These canine refugees are the ancestors of most Havanese outside Cuba today.The revival of the breed began in the 1970s, when an American couple breeding dogs found some descendants of the 11 dogs that were brought from Cuba. As most Havanese from outside Cuba can trace their ancestry back to only 11 dogs, breeders are working to expand the gene pool of American-bred Havanese.