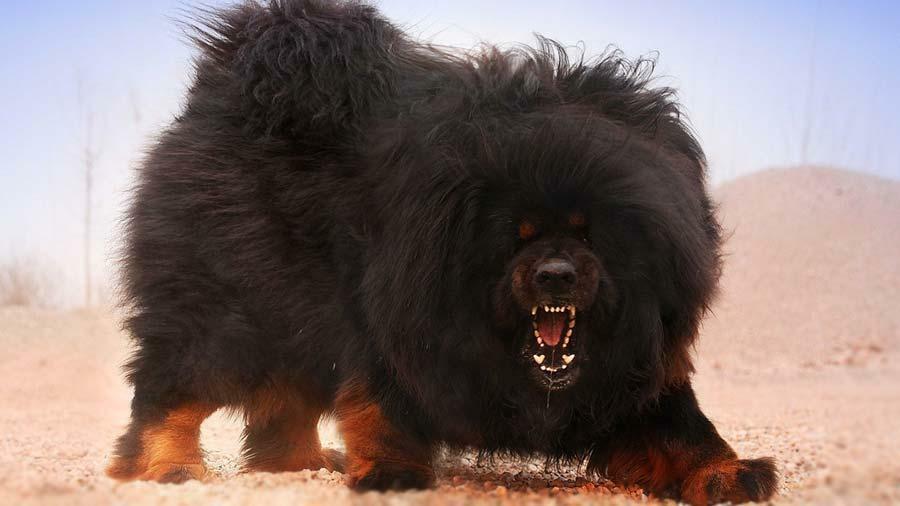 This still primitive Tibetan Mastiff dog breed developed centuries ago in Tibet. Originally used as livestock and property guarding dogs, Tibetan Mastiffs can still be found performing that role, but they also enjoy life as family companions and show dogs. Despite their enormous and intimidating size, these puppies are big softies when it comes to their human families. Despite their enormous size, these puppies are big and soft when it comes to their human families. They retain their guardian nature, however, so strangers should beware, and introductions to trusted humans go a long way.AniMall24 recommends a large, roomy crate to give your large Tibetan Mastiff a place to rest and relax. You should also buy a dog water bottle for any outdoor adventures you have with your pup.

Keep in mind that your cute little teddy bear will grow into a 75 to 160 pound dog. The Mastiff’s size makes it unsuitable for flat living. If your schedule does not allow you to exercise him during these hours, he may not be the breed for you.They are generally quiet indoors.The Tibetan Mastiff should not be allowed to live outdoors. Because of its protective nature, the Tibetan Mastiff should never be walked off leash. Tibetan Mastiffs are very intelligent, independent and stubborn, but sensitive to human moods. They will get angry if you shout at or discipline their children or argue with your spouse. They enjoy your company but are never sycophantic.This is not the breed for people who wish to compete in dog sports such as agility or obedience.Tibetan Mastiffs left outdoors at night will bark to let you know they are on the job – so don’t leave them outdoors at night. The Tibetan Mastiff needs early socialisation which should continue throughout its life. Without it, he can be inappropriately aggressive towards dogs and people he does not know. Socialisation helps it learn to discriminate, which is essential for a guardian breed. The Tibetan Mastiff is not recommended for a shy or first time owner. This breed needs a confident handler who is consistent and firm, but also affectionate. The Tibetan Mastiff has a strong character and will test whether it really means what it says. The Tibetan Mastiff can become bored without adequate physical and mental stimulation. This can lead to destructiveness, barking and other negative behaviour. If you are interested in owning a Tibetan Mastiff, be aware that it will lose at least a few items to its sharp teeth before it reaches three years of age.Tibetan Mastiffs can get along well with children if raised with them, but may mistake screaming and playing with children as a sign of aggression that requires action on your part. They may not adapt to neighbourhood children. Never buy a Tibetan Mastiff from a puppy mill, a pet shop or a breeder who does not offer guarantees or health certificates. Look for a reputable breeder who tests their breeding dogs to make sure they are free of genetic diseases and have a good temperament.

The Tibetan Mastiff originated, somewhere else, in Tibet. Like so many breeds, it has little documented history before the late 19th century, but is believed to have been around for many centuries, DNA evidence tells us that Mastiff-type dogs originated in Tibet about 5,000 years ago, and the Tibetan Mastiff it is undoubtedly a descendant of those dogs. They developed into two types: the Do-Khyi, who lived in villages or traveled with nomadic herdsmen and functioned as herd keepers, and the larger Tsang-Khyi, who were often given to lamaseries, where they served as guardians of the monks. Tibetan Buddhists. , or lamas, who lived there. Little is known of the Tibetan Mastiff before 1800. In 1800, a Captain Samuel Turner mentioned the use of “huge dogs” in his memoirs, An account from an embassy to the Teshoo Lama’s court in Tibet, but did not give a description. from them. In 1847, the first dog from Tibet was imported into England and given to Queen Victoria as a gift from Lord Hardinge, the viceroy of India. In 1873, the Kennel Club of England was formed and the Tibetan Mastiff was officially entered in the Herd Book as a Tibetan Mastiff, leaving behind its previous title as “Big Dog of Tibet”. In 1874, the Prince of Wales, who later became King Edward VII, imported two more Tibetan Mastiffs to England and they were shown in 1875 at the Alexandra Palace Show. Tibetan Mastiffs continued to be imported occasionally to England and Europe, and the first Tibetan Mastiff Breed Club was formed in 1931. World War II put an end to breeding, and it was not until 1976 that English breeders began importing dogs again. breed had a similar history in the United States. In the late 1950s, two Tibetan Mastiffs were turned over to the President of the United States, but the dogs were taken to a farm and disappeared from public scrutiny. It was not until 1970 that several more Tibetan Mastiffs were imported into the United States and became the founding dogs of the American line. The Tibetan Mastiff Club of America was founded in 1974, as was the Tibetan Mastiff Association of America. The first show in which the Tibetan Mastiffs appeared was the first national specialty match in October 1979. The breed was recently recognized by the American Kennel Club as a member of the task force in January 2007. Today, in Tibet, it is Hard to find a purebred Tibetan Mastiff, but one can occasionally be found traveling with caravans and traders, and tending livestock and households.