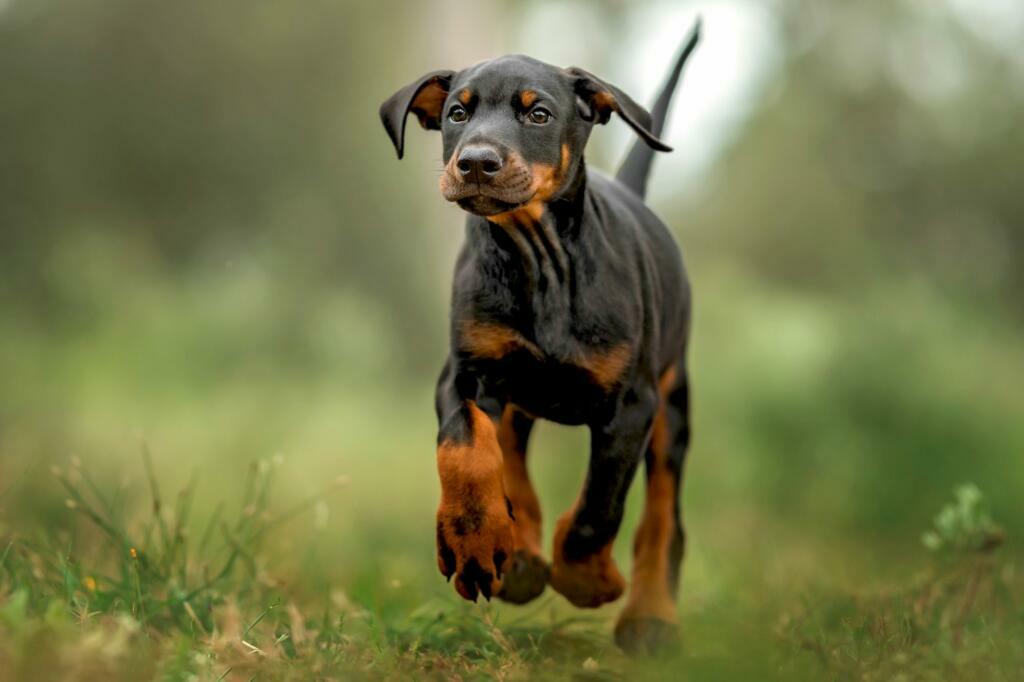 The Doberman Pinscher originated in Germany in the late 19th century, and was bred primarily as a guard dog. Their exact ancestry is unknown, but they are believed to be a mixture of many dog breeds, such as the Rottweiler, the Black and Tan Terrier and the German Pinscher. They are very energetic and intelligent dogs that do well in police and military work, in dog sports and as guardians and family companions.remember that you can find almost any breed of dog at local shelters and rescues. If you decide this is the breed for you, adopt! AniMall24 recommends a large, roomy cage so your large Doberman Pinscher has a place to rest and relax. You should also buy a dog brush and massager for your short-haired puppy.

The Doberman has a great deal of energy and needs plenty of exercise.this breed can be protective, so don’t be surprised when it takes on the role of guardian of the home.the Dobie will take on the role of alpha in your home if you are not a strong leader. The Dobie is sensitive to cold and needs adequate shelter in winter (he likes to be in the house by the fireplace). The Doberman has earned a reputation for being vicious. Although your Doberman has a sweet personality, neighbours and strangers may be afraid of it. To get a healthy dog, never buy a puppy from an irresponsible breeder, puppy mill or pet shop.

Once upon a time, at the end of the 19th century, there was a tax collector named Louis Dobermann, who lived in the town of Apolda in the German district of Thuringia. His job as a tax collector was dangerous because there were bandits in the area who could attack him while he was making his rounds, and as Dobermann was also the town dogcatcher, he often carried a dog for protection. Dobermann began breeding dogs with the idea of a loyal and protective companion. The result of his breeding experiments was the first Doberman Pinscher. There are no records as to which dogs Dobermann used to create the breed, but it is speculated that the Rottweiler, the German Pinscher and the Black and Tan Terrier were part of the mix. The Dobie was first exhibited in 1876, where it was received with great enthusiasm, and when Dobermann died in 1894, the true knowledge of the breeds that were combined to make the Dobie went with him to the grave. By the end of the 19th century, the German breeders who continued Dobermann’s work were primarily concerned with function rather than appearance. They wanted to develop the Doberman into a “super dog”. At first, they bred only the bravest, smartest, fastest and toughest dogs. They succeeded almost with flying colours. A breeder named Otto Goeller is responsible for making the Doberman a more usable dog and, in 1900, the German Kennel Club recognised the Dobermann Pinscher as a breed. Legend has it that one of the first Dobies brought to America was shown in competitions and won “Best in Show” at three consecutive shows before any judge dared to open the dog’s mouth to check its teeth. The Dobermann Pinscher Club of America was formed in 1921. A year later, it adopted the breed standard that had been drawn up in Germany. The next 15 years were critical in the development of the Dobie. During World War I, the number of Dobies in Europe declined severely, because starving people could not afford to keep large dogs. The Dobies that survived were owned by the military, the police and very wealthy people. After 1921, almost all the best German sires and their offspring were taken to the United States. Then came World War II, and the Doberman Pinscher was once again endangered in Germany. Many believe that if the Americans had not brought so many dogs to the United States earlier, the breed would have become extinct.In the mid 1900’s, the Germans dropped the word Pinscher from the name, and the British dropped it a few years later.Over the years, breeders have worked diligently to take the edge off the sharp personality of the original Dobie with good results. Although the Doberman is protective of his family and home, he is known as an affectionate and loyal companion.

Lives beyond the limits