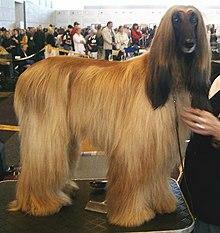 The Afghan Hound is elegance personified. This ancient and unique breed of dog has a look unlike any other: a spectacular silky coat, an exotic face, and a fashion model’s slender build. Aside from its looks, Afghan enthusiasts describe this hound as aloof and comical. Hailing from Afghanistan, where the original breed name was Tazi, the Afghan is believed to date back to pre-Christian times and is considered one of the oldest dog breeds. Although they are purebred dogs, you can find Afghan Hounds in shelters or in the care of rescue groups. These affectionate and adaptable dogs adapt well to any type of home and any type of family. Of course, you’ll have to devote a fair amount of time to maintaining that luxurious coat, not to mention plenty of exercise to manage their high energy levels. If you can provide him with the care he needs, you’ll have a loving companion who is sure to turn heads with his gorgeous appearance. AniMall24 recommends a good large, spacious cage so that your large afghan has a place to rest and relax. You should also buy a dog brush and massager for your long-haired puppy.

Grooming is essential. Only those who really enjoy grooming, or are willing to pay a professional groomer to do it, should consider an Afghan Hound. The Afghan’s natural hunting instinct leads it to chase prey (the neighbor’s cat, your child’s rabbit, the hamster in the third grade class, etc.). The Afghan Hound can be difficult to train due to its independent nature. Training can be time consuming and requires patience. House training can be difficult. This breed can continue to have accidents in the house until about six months of age. The Afghan Hound has a low tolerance for pain. A small injury is more upsetting to this breed than others, and this dog can sometimes appear whiny or infantile. Afghan Hounds are sensitive and high-spirited, and do not respond well to rough handling, so be gentle. While this particular breed is often good and even affectionate with children, it is best that the puppy grows up with the children it will be living with and that they are mature enough to understand the importance of being considerate of this dog’s sensitive nature. To get a healthy dog, never buy a puppy from an irresponsible breeder, puppy mill or pet store. Look for a reputable breeder who tests their breeding dogs to make sure they are free of genetic diseases that can be passed on to puppies and that they have a sound temperament.

The Afghan Hound comes from Afghanistan, where the original name of the breed was Tazi. The breed is believed to date back to pre-Christian times. DNA researchers have recently discovered that the Afghan Hound is one of the oldest dog breeds and dates back thousands of years. The earliest documentation of a Western breeder of Afghans is that of an English officer stationed near Kabul. Afghan Hounds from his Ghazni kennel were transported to England in 1925 and then came to the United States. The breed was recognized by the American Kennel Club in 1926 and the Afghan Hound Club of America was admitted as a member of the AKC in 1940. Zeppo Marx of Marx Brothers was one of the first to bring Afghan Hounds to the United States. In the late 1970s, the hound’s popularity skyrocketed as Barbie, responsible for more than 80% of Mattel’s profits, and Beauty, her pet Afghan Hound, made their way into the homes and hearts of countless American girls. During this same decade, the development of lure coursing competitions increased the breed’s appeal. In the 1980s, the Afghan became a star of AKC competitions and, despite its independent nature, has expanded into obedience competition.

An Oscar for an octopus