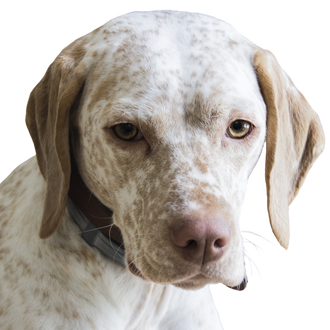 The Braque du Bourbonnais is an old purebred pointing dog originating from the country of France. Affectionate, calm and intelligent, these puppies have some of the best qualities of any dog breed today. This breed goes by other names, such as Bourbonnais Pointer, Bourbonnais Pointing Dog, French Pointing Dog, French Pointer, Braques Francaises, and Braque Bourbonnais. Despite being a rare breed, you can sometimes find these adorable pups at local shelters and rescues, so remember to adopt. These affectionate pups are best suited for homes with yards and are not recommended for apartment living. They are people-oriented and need to be close to their humans, which makes them well suited for families or large households with more than one person at home. If you want a gentle and energetic puppy, the Braque du Bourbonnais may be the right dog for you.

The main colors of a Braque du Bourbonnais are brown, white, fawn and spotted. Sometimes their colors are solid, and sometimes they will have a mixture of these colors with spots. They are not hypoallergenic puppies, but they are very easy to groom thanks to their short coat and they hardly molt. The Braque du Bourbonnais might be more suitable for older children and adults who know how to play gently. Training is fairly easy, as these dogs are intelligent and eager to please their humans. They won’t be much of a watchdog or guard dog, as they have a friendly disposition towards everyone they encounter. Make sure your dog gets at least one good half-hour to hour-long walk a day, with some active play sessions and shorter walks mixed in. Braque du Bourbonnais dogs tend to cling to their human family and can suffer from severe separation anxiety if left home alone. It is best for them to be with a family or a large household where someone is home more often than not.

The history of the Braque du Bourbonnais dates back to the 1500’s in the province of Bourbonnais in France. They are considered one of the oldest pointing dogs of the pointing breeds in Europe. From their name, “Braque”, in French, means “to point or to point. “The Italian naturalist Ulisse Aldrovandi, during the Renaissance, created the first illustrations of this dog which still exist. However, during the First World War, the Braque du Bourbonnais almost disappeared. After the war, breeders united to bring the breed back, as it was a much-loved hunting companion. The first breed club was founded in 1925. By World War II, the breed had almost completely recovered. Although it was on the verge of extinction again during World War II, French hunters and breeders decided to try once more to save it from extinction in 1970. They succeeded and, in 1982, founded a new Braque du Bourbonnais club. The United Kennel Club (UKC) recognised and registered the breed in the hunting dog group in 2006. The American Kennel Club (AKC) listed the breed in its Foundation Service in 2011. Although the Braque du Bourbonnais was nearly extinct, some have ended up in shelters or in the care of breed-specific rescues. Consider adoption if you decide this is the dog breed for you.

Remove dog and cat hair from sofa and clothes