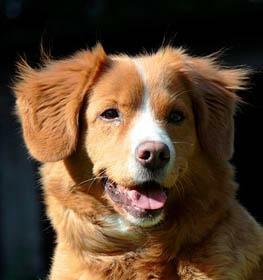 The Nova Scotia Duck Tolling Retriever dog breed was created to attract and retrieve waterfowl. This versatile breed excels in the field and show ring, in obedience and agility, and as a companion to an active family. Highly adaptable and affectionate, these dogs can even do well in flats, as long as their humans can keep up with providing sufficient exercise and plenty of daily walks. AniMall24 recommends a dog bed to give a good night’s sleep to your medium sized Nova Scotia Duck Tolling Retriever. You should also pick up a dog water bottle for any outdoor adventures you have with your pup!

The original Tollers were foxes. The Micmac Indians of Canada observed foxes performing tolling behaviour on the banks of rivers and lakes, and then snatching ducks foolish enough to get too close. In the 19th century, hunters in England and Canada began to develop dogs that would go into the water to retrieve downed birds. These retrievers, as they were called, were named after the places where they were developed, such as Labrador and Chesapeake Bay, but hunters in Yarmouth County, in the Little River district of southwestern Nova Scotia, went a step further. They created a dog that would attract birds as well as retrieve them. Starting with the dogs of the Micmac Indians, they mixed a little of this and a little of that, skilfully blending in other breeds of retrievers, Cocker Spaniels, Irish Setters and perhaps even farm collies. The result became known as the Little River Duck Dog. For years, the Little River Duck Dog was known only in the area where it was developed. But in 1945 the Canadian Kennel Club gave the breed recognition, as well as a new name: Nova Scotia Duck Tolling Retriever.The breed first came to the United States in the 1960s, but did not arouse much interest. However, by 1984, the breed had enough fanciers that the Nova Scotia Duck Tolling Retriever Club USA was formed. The American Kennel Club accepted the breed into the Miscellaneous Class in 2001 and into the Sporting Group in 2003, and today the Toller ranks 110th out of 155 breeds and varieties recognised by the AKC.