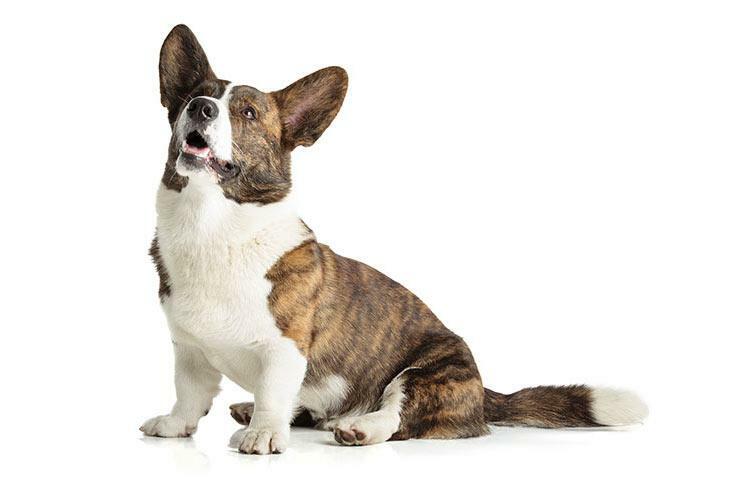 The Cardigan Welsh Corgi is the older of the two breeds of Corgi dogs, and it is believed that this type of dog has existed in Wales for over 3,000 years. Throughout history, people used these dogs to drive livestock to market. Today, they love to spend time with their families and are active and fun playmates for school children. The Cardigan is distinguished by its long tail, like the sleeves of a knitted sweater. Its medium-length coat is available in many colors and patterns, including red, brindle, blue merle, and black, usually with white markings. Known as the yard dog, the breed is sensitive and affectionate. See below for all the dog breed traits and facts about the Cardigan Welsh Corgis.

Cardinals are noisy dogs. They bark at anything and everything. Cardinals are intelligent but can be stubborn. If house training is a problem, crate training is advised. Cardigans have a strong herding instinct that may cause them to nip at your children’s heels when they are playing. Cardigans like to eat and will overeat if given the opportunity. Be sure to watch their food intake so they don’t become obese. Cardigans have a lot of energy and need daily exercise. Cardigans should never be purchased from unknown breeders, puppy mills or pet stores.

The Cardigan Welsh Corgi is descended from the same family of dogs that produced the Dachshund and Basset Hound. It is believed that the ancestors of today’s Cardis were brought to Wales over 3,000 years ago by Celtic tribes who migrated to Wales from central Europe. This early dog was a transitional form between the Teckel and Spitz families. Some believe that when the Vikings invaded Wales, the Spitz-type dogs they brought with them interbred with the original Corgi to give rise to the Pembroke Welsh Corgi. Cardigans were working dogs that helped herd farmers’ livestock and keep them safe from predators. They also helped farmers to drive cattle to the fields and to market. They were highly valued as cattle dogs, guard dogs, family pets and vermin exterminators. So prized were the dogs and so vital were they to the economic well-being of the farmers that an ancient Welsh law imposed severe penalties on anyone who damaged or stole one of them. Cardigan Welsh Corgis were first shown at English dog shows in 1919 and in 1926 the English Cardigan Welsh Corgi Association was founded. At that time, Cardigans and Pembrokes were considered one breed, and were often interbred, which led to many disputes between breeders. In the mid to late 1920’s, a red and white dog named Bob Llwyd had a major influence on the breed. It is said that the first breed standard was based on him. He sired the first breed champion, Ch. Golden Arrow, who was born in 1928 and finished his championship in 1931. Also in 1931, Mrs. B. P. Bole imported the first pair of Cardigans to the United States. One of them was a female named Cassie who was already a well-established producer of high quality Cardigans in England. Although she was poorly marked, being white with brindle markings, she produced excellent puppies. One of her puppies, named Megan, became the first champion of the breed in the United States. Today, the Cardigan Welsh Corgi Club of America, Inc. holds an annual competition for champions only, called the Megan Show. In 1934, the British Kennel Club declared Pembrokes and Cardigans to be separate breeds, thus putting to rest any doubts about the interbreeding of the two. The following year, the American Kennel Club recognised the Cardigan and the Pembroke Welsh Corgi. The Cardigan Welsh Corgi Club of America was founded in 1935. The Cardigan has moved from the non-sporting group to the working and herding group at American Kennel Club (AKC) dog shows. Because the parent club has always been committed to avoiding commercialisation of their dogs, they are not as well known as the Pembroke, but they always have a special place in the hearts of those who know and love them. Today, the breed standard is maintained by the Cardigan Welsh Corgi Club of America.