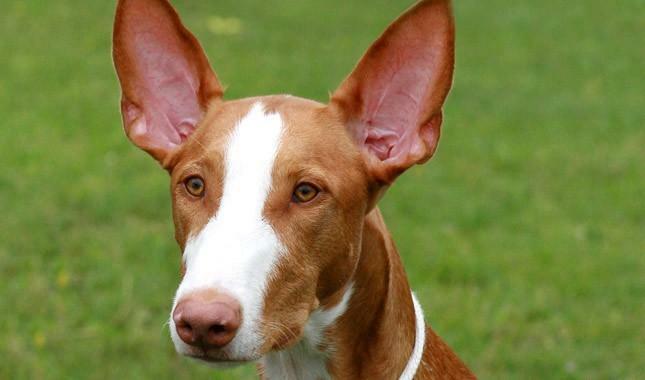 The Ibizan Hound was originally bred to hunt rabbits and small game on the Balearic island of Ibiza. Today, the Ibizan hound breed is still used for this function in Spain and elsewhere. Ibizan hounds also compete in lure coursing, agility, obedience, conformation and tracking, as well as being much-loved family companions. Despite the breed’s high energy levels, Ibizan Hounds can live well in flats, provided their exercise needs are met. However, do not leave them home alone for long hours, or you could end up with a bored and destructive puppy. While they get plenty of walks and play time, this dog will shower the humans in their life with plenty of affection.AniMall24 recommends a dog bed to give a good night’s sleep to your medium sized Ibizan Hound. You should also pick up a dog toy to help burn off your pup’s high energy.

Ibizan hounds do well in flats if properly exercised and should be kept on a leash whenever not in a fenced area. Beezers have a strong prey drive and will chase moving objects regardless of your commands. At least a 2 metre fence is needed to confine them in a yard. Underground electronic fences are not recommended for this breed. If their exercise needs are not met, they may become bored and destructive. Male Ibizan Hounds may develop a poor appetite as adolescents. Encourage them to eat, but don’t go overboard with food bribes, elaborate meals or hand feeding; you will simply end up with a picky eater.Beezers get cold easily. If you live in a cold or wet climate, buy a coat for your dog.Ibizan Hounds are excellent with children, but all dogs should be supervised when around small children.These dogs are generally quiet indoors and can become addicted to the couch, but need a daily walk or run. Ibizan hounds are expert counter surfers, so do not leave food out, even if you think it is out of your dog’s reach.Ibizan hounds are generally not aggressive, but have a high prey drive and are not best suited to homes with small animals. They can learn to get along with cats if raised with them, but outdoor cats and other animals are fair game.Ibizan hounds are a rare breed. To get a healthy dog, never buy a puppy from an irresponsible breeder, puppy mill or pet shop. Look for a reputable breeder who tests their breeding dogs to make sure they are free of genetic diseases that can be passed on to the puppies and that they have a sound temperament.

When King Tut’s tomb was opened in 1922, one of the treasures found inside was a life-size statue of the jackal god Anubis, the guardian dog of the dead, and the resemblance to the modern Ibizan hound was striking. Carving and other artefacts from the time of the pharaohs suggest that dogs like the Ibizan hound have been around for 5,000 years, making them one of the oldest types of dog. Genetic research has shown that today’s Ibizan, as well as its cousin, the Pharaoh hound, are recent reconstructions of an older type and do not actually have a lineage going back thousands of years.Apart from the age of the Ibizan, how did this type of dog end up on the Spanish island of Ibiza, from which it takes its name? It is possible that the Phoenicians, the most adventurous traders and travellers of the time, brought it there in the 8th or 9th century BC. On Ibiza, the agile and swift hound traversed rough terrain, using its splendid sight and hearing to search for its prey: rabbits and hares. The Ibicencans lived a hard life on their Spanish island, a life that trained them to hunt with skill, tenacity and patience. They might have remained there, little known, but for the importation of a pair, Hannibal and Certera, by Colonel and Mrs. Consuelo Seoane to Rhode Island in 1956. They produced the first American litter of eight puppies which, along with several other imports, became the basis of the breed in the U.S.A. The Ibizan Hound was recognised by the American Kennel Club in 1979 and first appeared at the Westminster Kennel Club show in 1980. Today it remains a rare breed. The Ibizan Hound ranks 138th out of 155 breeds and varieties recognised by the AKC.