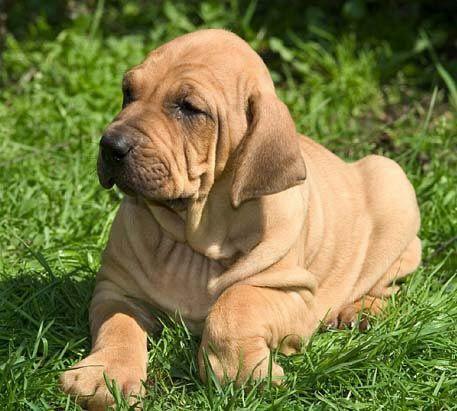 The Fila Brasileiro was developed in Brazil centuries ago as a big game and working dog. These large dogs can be intimidating, but there is a reason why the saying “faithful as a Fila” exists in Brazil. This breed is also known as the Brazilian Mastiff, the Brazilian Hound, the Brazilian Cao, the Cao de Fila, and the Fila. Although these are purebred dogs, you can still find them in shelters and rescues. Remember to adopt. This huge dog is probably not the best choice for novice pet parents or for people living in flats, as the Fila Brasileiro needs firm, experienced training and plenty of room to run. The breed is banned in several countries where these dogs are considered aggressive. But for an experienced large dog owner who is willing to devote a serious amount of time to training and socialisation, the Fila Brasileiro can be a wonderful companion and watchdog.AniMall24 recommends a large, roomy crate to give your large Fila Brasileiro a place to rest and relax. You should also buy a dog brush and massager for your short-haired puppy.

Fila Brasileiros have a high energy level. Make sure your dog gets at least two or three good walks of half an hour to an hour’s duration a day, with some good active play sessions and shorter walks mixed in. The Fila Brasileiro’s coat can be brindle, fawn or black. Its coat is soft and short-haired, and sheds regularly. Your Fila may not get along well with other children, such as playmates, so it is important to set boundaries for both dog and children. Teach your children to interact correctly with your Fila Brasileiro to avoid any unwanted injuries.Filas may get along well with other dogs their size but tend to see anything smaller as prey. Filas can get along well with other dogs their own size, but tend to see anything smaller as prey. Even with consistent training, Filas are predisposed to chase small animals, such as cats and smaller puppies, and are likely to be best suited to be the only animal in the house.The Brazilian Mastiff was bred to be loyal only to its owners, which means that consistent and early socialisation is key to raising a Fila Brasileiro that does not become aggressive towards visitors or strangers.

The exact origins of the Fila Brasileiro, including the date of the breed’s creation, are not well documented. Based on the appearance of the Brazilian Mastiff, it is believed that this huge breed was created by crossing English Mastiffs, Bulldogs and Hounds during the 17th century. They were also used to hunt and chase livestock, unfortunately along with slaves escaping from plantations, and would grab them by the neck, holding them until the dogs’ humans arrived. Despite their enormous size, these guard dogs are agile. The Fila Brasileiro could chase up to 35 MPH for its human plantation owners, and then switch to a calm and docile mode when relaxing with the family.Centuries later, in 1946, the first breed standards for the Fila Brasileiro were published. The inhabitants of the city of Sao Paulo were responsible for keeping the breeding records. In 1954, the Brasil Kennel Club (BKC) accepted the breed, and in 1960, so did the Fédération Cynologique Internationale (FCI). The more aggressive breed is not recognised by show clubs such as the American Kennel Club, as judges would not be able to inspect the watchful and powerful breed.