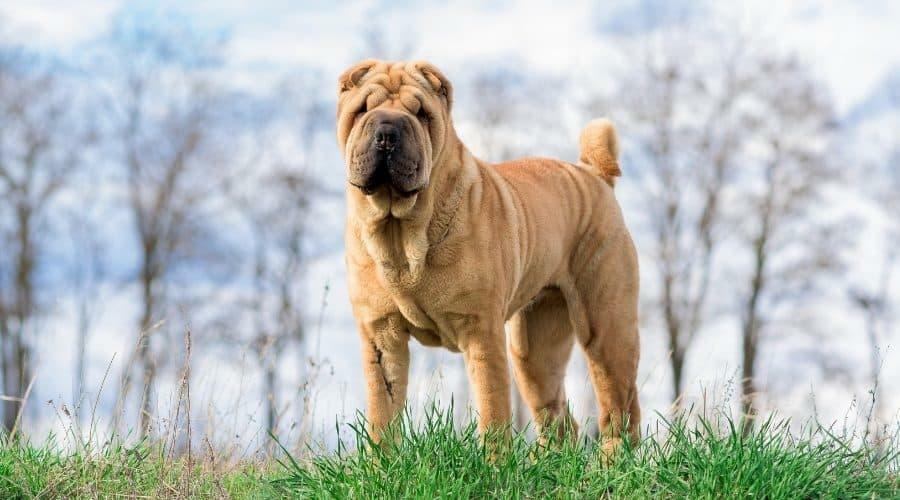 Although the Chinese Shar-Pei is the 134th breed recognised by the American Kennel Club, this breed of dog has existed for hundreds of years. They were developed for guarding, hunting, herding and later, unfortunately, fighting. Today, they are known for their distinctive short, bristly coat, their loose, wrinkled skin and their devotion to family. Although they are purebred dogs, you may find them in the care of shelters or rescue groups. Remember to adopt. In modern times, the Shar-Pei enjoys life as a beloved companion above all. They can even adapt to life in a flat. However, neighbours may not appreciate your dog’s barking tendencies. New parents should be careful, as these dogs need firm and constant training, which will not be easy with their natural stubborn tendencies. Early socialisation will help. If you can meet the needs of the breed, you will have a protective watchdog and a loyal best friend.

The Shar-Pei was once a guard and fighting dog. Today it is primarily a companion, although it retains its fighting toughness. It can be aggressive towards other dogs or people, so it is essential to socialise and train it from an early age.Because of its short nose, the Shar-Pei is prone to overheating. Keep it indoors with fans or air conditioning during the hot summer months. Like other short-nosed breeds, it tends to snore and wheeze, and is a terrible runner.Like the Chow, the Shar-Pei has a dark tongue. Like the Chow, the Shar-Pei has a dark tongue, which is considered normal and even desirable by dog show enthusiasts. The wrinkles and folds in the skin are an ideal breeding ground for fungal infections. Although devoted to his family, the Shar-Pei can be willful and stubborn. It must learn right away who is the leader of the pack or it is likely to compete for the position.To get a healthy dog, never buy a puppy from an irresponsible breeder, puppy mill or pet shop. Look for a reputable breeder who tests their breeding dogs to make sure they are free of genetic diseases that can be passed on to puppies and that they have a sound temperament.

The Chinese Shar-Pei originated in the southern provinces of China, where it was valued as a hunter, herder, guardian and fighter. Some historians believe that the Shar-Pei is an ancient breed, although there is no definitive evidence to prove this. Statues closely resembling the Shar-Pei have been dated to the Han dynasty (200 BC), although these statues also resemble the Chow and Pug.After the establishment of the People’s Republic of China, the country’s dog population was virtually wiped out. However, some Shar-Peis were bred in Hong Kong and Taiwan. If it were not for the efforts of one man, Matgo Law, of Down-Homes Kennels in Hong Kong, the Shar-Pei might have become extinct. Thanks to him, a small number of Shar-Peis were brought to the United States in 1973 and breed fanciers formed the Chinese Shar-Pei Club of America, Inc. in 1974. The first national specialty show was held in 1978. The Shar-Pei was accepted into the American Kennel Club Miscellaneous Class in 1988, and recognised by the AKC in 1991 as a member of the Non-Sporting Group.