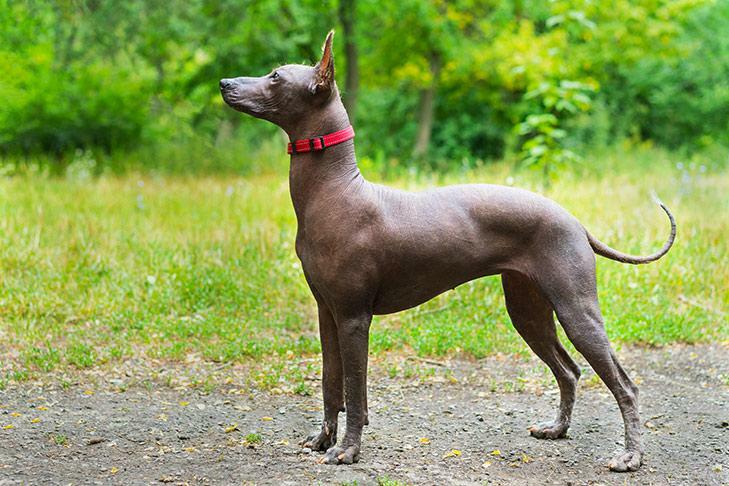 The Xoloitzcuintli breed of dog – sometimes called Mexican Hairless or simply Xolo – may well have descended from the first dogs to set foot on the North American continent.Although these purebred dogs are quite rare, you can find them in shelters and rescues. Remember to adopt. In their native Mexico and Central America, they were very popular as “doctors”, as the warmth their bodies give off comforts people with arthritis and other ailments. Today, people like to cuddle with them.

The Xolo comes in three different sizes, making the breed adaptable to any type of home.Native to Mexico and Central America, the Xolo is also known as the Mexican hairless.The Xolo is believed to date back to pre-Columbian civilizations.Although they are known as a hairless breed, the Xolo also comes in a coated variety.The Xolo’s body is slightly longer than it is tall.In addition to being a great companion, the Xolo is also a protective watchdog. The Xolo’s lack of insulating coat makes them feel warm to the touch, although their body temperature is no higher than other dogs.The Xolo was recognised by the American Kennel Club in 2011 as a member of the Non-Sporting Group.There are fewer than 1,000 Xolos in the United States, with approximately 30,000 worldwide.The Xolo is not hypoallergenic, although its hairless body may be less likely to trigger allergies in susceptible individuals.The Xolo can have a strong prey drive and is likely to chase other animals.

Unlike dogs that were created by crossing or mixing two or more breeds, the Xolo is considered a natural breed, likely the result of a spontaneous genetic mutation. For centuries, the race was shaped by natural selection, not human manipulation. Archaeological evidence suggests that the Xolo’s ancestors were dogs that accompanied migratory peoples across the now submerged Bering landmass from Asia to the New World. The dog we now know as Xoloitzcuintli takes its name from the Aztec deity Xolotl, the god of fire and the escort of the dead to the underworld, and “itzcuintli,” the Aztec word for dog. These Xolotl dogs were said to have healing powers, especially effective in cases of asthma, rheumatism, and insomnia. In life, they chased away evil spirits and intruders, and were believed to serve as guides for the dead on their way from this world to the next. Unfortunately, that guiding job generally involved being sacrificed to accompany the dead. Even less fortunately, Xolos were also considered fine eaters, however they thrived and went through periods of popularity, beginning in 1887, the first time the breed was recognized by the American Kennel Club, which at the time referred to them as hairless Mexicans. . A Mexican dog named Mee Too was the first Xolo registered with the AKC. After that first wave of interest, little was heard of the breed except for a brief time in the limelight in 1940, when a dog named Chinito Jr. became the first and only Xolo to win an AKC championship. Pet stores could barely keep the dogs in stock. Mexican artists Diego Rivera and Frida Kahlo portrayed them in works of art. However, the fad is fickle and the Xolo disappeared again, so much so that the AKC canceled it in 1959. The breed might have disappeared entirely, but fans have brought it back from the brink of extinction. Today it is considered a national treasure in Mexico and was named Dog of the Year there in 2010. Approximately 30,000 are known to exist worldwide. The American Kennel Club brought the breed back into the fold in 2011. The Xolo currently resides at the intersection of rarity and popularity.