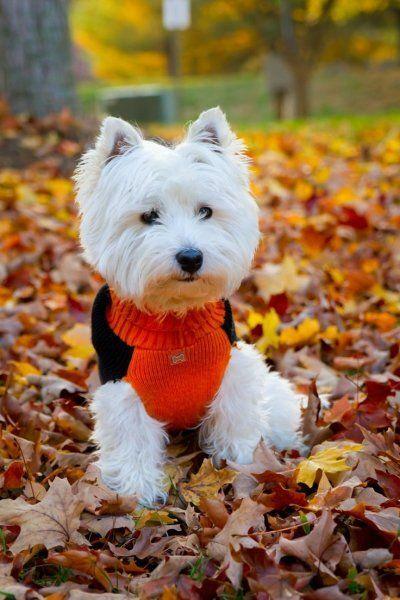 The best way to describe the small Scottish West Highland White Terrier dog breed is simply to say that they are so full of self-esteem that they know they are the best there is. Always up for a good time, they will make you laugh as they entertain themselves.breed enthusiasts affectionately call these dogs Westies for short. Although these are purebred dogs, you can still find them in shelters and rescues. Remember to adopt. Westies are friendly and cheerful, with a lively character that makes everyone love them (except small rodents), especially when they tilt their heads to one side and look at you curiously. Affectionate and intelligent, these puppies are a great addition to any family living in any size home, even flats. You just need to make sure you can provide them with a good amount of exercise and plenty of play sessions.

A Westie can have terrier traits (no surprise there). It will dig, bark and chase vermin. However, with proper training, it can be trained to bark only once and not dig at all, although some dogs are less discouraged than others. However, the pursuit of vermin is programmed, and no amount of training will alter it.A Westie does well in multi-dog households, unless there is more than one intact male (and he is one of them). He can get used to cats. He cannot adapt to small pets, such as rabbits and birds, due to his strong prey drive and is generally easy to train if done positively and consistently. It should be noted that a Westie is strong-willed and has a high self-esteem, which can cause some training difficulties if training becomes boring or too hard.Its coat is easy to groom and only requires regular brushing. Although it does not require as much exercise as other breeds, the Westie needs one or two daily walks or play sessions. Generally, it has a low energy level indoors, although individual dogs vary in this respect.A Westie is adaptable and does well in any type of housing, including flats (although if not trained to stop barking, it is likely to cause difficulties with neighbours).It is a social dog that gets along well with everyone. It likes children of all ages, but is best suited to households with older children.A Westie can be left for long periods of time when its people are working. If you are a demanding gardener, the Westie is not the best choice, as it can become fond of digging up plants and be over-enthusiastic about helping in the garden.To get a healthy dog, never buy a puppy from an irresponsible breeder, puppy mill or pet shop. Look for a reputable breeder who tests their breeding dogs to make sure they are free of genetic diseases that can be passed on to puppies and that they have a sound temperament.