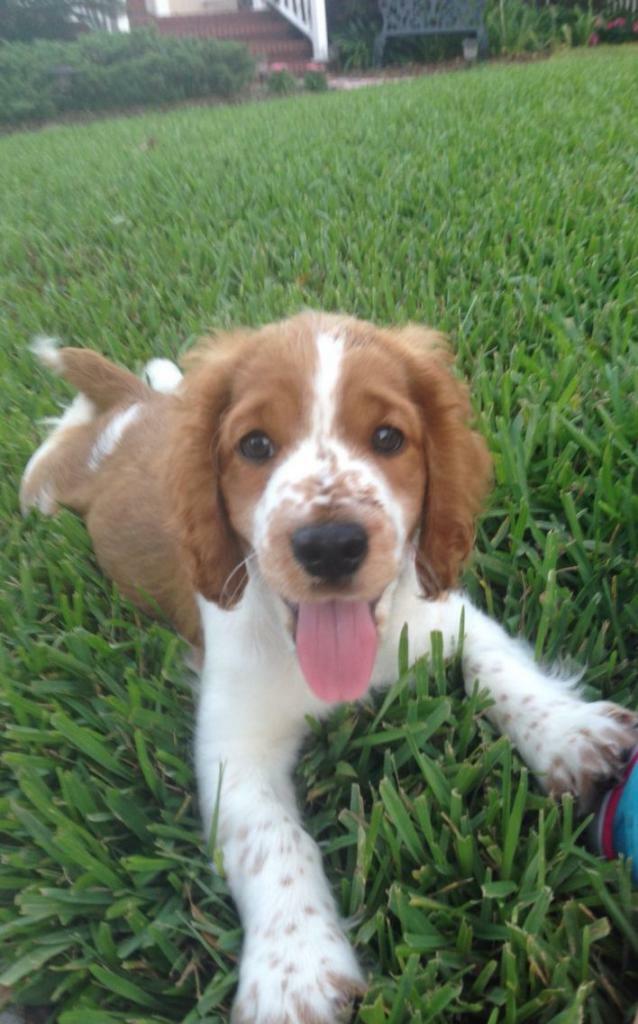 The Welsh Springer Spaniel dog breed was developed as a hunting dog to flush game in the field. Although they are purebred dogs, you may find Welsh Springer Spaniels in shelters or in the care of rescue groups. Welsh Springer Spaniels have a very affectionate side and make excellent family companions. They can even adapt to life in a flat; however, they have a lot of energy and must be active to be happy. They also don’t take well to being left alone in the house all day. But give them the exercise, training, and attention they need, and they will be your best friend. AniMall24 recommends a dog bed to give your medium-sized Welsh Springer Spaniel a good night’s sleep. You should also buy a dog toy to help burn off your puppy’s great energy.

Spaniels are believed to have originated in Spain (hence their name) many centuries ago and eventually spread to other parts of the world. Welsh Springer, English Cocker, English Springer Spaniels, and other spaniels of British origin share a similar early history. At first, all spaniels were called cockers or cocking spaniels. They were named for the function they performed, not for their type. The first breeders often crossed different types of dogs. Later, they began to divide the spaniels into Water Spaniels and Land Spaniels. The Welsh Springer Spaniel types were considered Land Spaniels. Many early writings mention a Welsh Cocker Spaniel that many believe was the forerunner of today’s Welsh Springer Spaniel. Tapestries created during the Renaissance depict a Land Spaniel that closely resembles the Welsh Springer Spaniel. Welsh Springer Spaniels became the favorite hunting dog of the nobility during the 1700s, but in the 1800s, they were replaced by English Springers and other spaniels. Eventually the breed was revitalized during the Victorian period in England. At the earliest dog shows of the 1800s, Welsh Springer Spaniel competed in the same class as English Springer Spaniel, the only difference being color. The Welsh Springer Spaniel was recognized by the Kennel Club of Great Britain as a separate variety from the English Springer Spaniel in 1902. Originally, the breed was called the Welsh Spaniel or Welsh Cocker. By designating it as a separate breed, the Kennel Gazette named it the Welsh Springer, which some believe may have caused some confusion with the English Springer Spaniel. Breed purists emphasize that Welsh Springers have no more connection to today’s English Springer than any other variety of spaniel and are, in fact, their own separate breed. Several aristocrats from South Wales raised the Welsh Springers for years. A notable breeder in the early 20th century was A.T. Williams, from Ynys-y-Gerwn, Neath. He was passionate about the breed’s work skills and lobbied for the preservation of its character and type. His grandfather had also owned Welsh Springers in the late 1800s. Williams had a dog named Corrin, who was born in 1893. Corrin was the first Welsh Springer Spaniel to be photographed, and he was a key stallion of the breed, as well as a successful show and working dog. to the United States in the late 1800s and quickly gained popularity. The American Kennel Club (AKC) recognized the breed in 1906. In the early 20s of the 1900s, although they would never become a very common breed, the popularity of Welsh Springer Spaniels grew in both the United States and England. . One of England’s leading exhibitors and breeders was Mrs. H.D. Greene of Craven Arms, Shropshire. Her Longmynd dogs were immortalized in a painting by Maud Earl, an artist known primarily for her paintings of dogs and other animals. Mrs. Green was the Secretary of the first Welsh Spaniel Club in England, and unfortunately lost her kennel during the First World War. she as well as two females named Longmynd Twig and L May Queen. World War I and World War II affected dog farming in the US as well as other parts of the world. Between the years 1926 and 1948, the AKC did not register any Welsh Springer Spaniel, and it was believed that there were no longer any in the U.S. After World War II, dogs were imported from England to revive the breed, and in 1961 , the Welsh Springer Parent Club was formed. In England, the breed did only slightly better. After World War I, Lieutenant Colonel John Downes-Powell formed a new breed club for the Welsh Springers. The club was formed in 1923, and Lieutenant-Colonel Downes-Powell served as its honorable secretary until 1947. During the time between World War I and World War II, some prominent Welsh jumpers were produced in England, including Ch. Shot O’r Baili and Ch. Shooter O’Mathern. One of the most influential dams was Goitre Lass, owned by Mr. D Lewis of Talybont-on Usk. She had 9 litters between 1926 and 1932. Six of those litters were the result of being crossed with Ch. Merglam Bang and produced five complete champions, three other CC winners, and several other award winners. In 1939, an English dog showman named Harold Newman was commissioned to ensure the breed’s survival during World War II. His dogs and his personality as a breeder, exhibitor and judge are cited as the main factors that helped the Welsh Springer Spaniels reappear in England in 1945. His stallion named Dewi Sant sired eight show champions and full champions. .