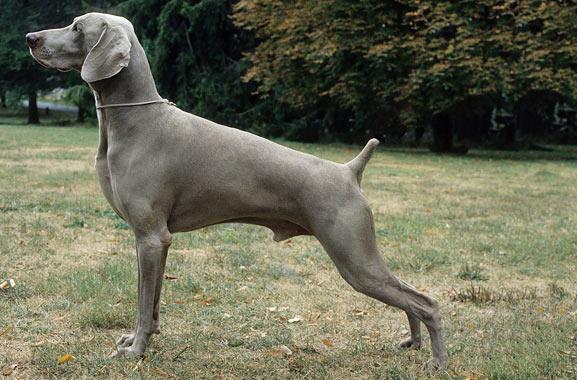 The Weimaraner, or “Silver Ghost”, was originally bred as a hunting dog to deal with big game, such as deer and bears, and was a highly sought-after breed of dog in its native Germany. Today, these elegant but demanding dogs can still be found on hunting grounds. Although they are purebred dogs, you may find Weimaraners in shelters or in the care of rescue groups. Weimaraners can be excellent companions, but because of their hunting heritage, they have a lot of energy and a strong prey drive. Novice owners and flat dwellers should be careful, as this dog needs constant training and lots of activity. That said, if you are prepared to meet the breed’s needs, you will be rewarded with a devoted and loving addition to your family.AniMall24 recommends a large, roomy crate to give your large Weimaraner a place to rest and relax. You should also buy a dog toy to help burn off your puppy’s high energy.

Weimaraners were bred to have a lot of energy and stamina. Weims are not soft-mouthed dogs like Golden Retrievers and some have a low tolerance for small, furry animals, such as rabbits, and even cats and dogs. Until you know your dog well, watch him carefully when small animals are in his presence.weims are very nervous dogs and can suffer from severe separation anxiety. If left alone for too long, they may bark, become destructive or even injure themselves.Although Weimaraners are hunting dogs, they do not like to live outdoors. Although Weimaraners are hunting dogs, they do not like to live outdoors and require a lot of attention and want to be close to you. Socialising them with many different people and situations when they are puppies and throughout their lives is essential, Weimaraners are intelligent and think for themselves. Weimaraners are intelligent and think for themselves, so they must be trained firmly, consistently and gently throughout their lives. Weimaraners can be difficult to housebreak, so crate training is recommended. Unethical breeders may advertise blue or black Weims as “rare” to attract buyers and charge more for puppies of these colours, but the truth is that blue and black Weimaraners are disqualified in the breed standard. Weims are intelligent and can learn quickly, but if their intelligence and energy are not channelled constructively, they may learn some things you don’t want them to know, such as opening doors and running away.To get a healthy dog, never buy a puppy from an irresponsible breeder, puppy mill or pet shop. Look for a reputable breeder who tests their breeding dogs to make sure they have no genetic diseases that can be passed on to the puppies and that they have a healthy temperament.

The Weimaraner dates back to the early 19th century, when it was developed at the Weimar court in what is now Germany. The nobles loved hunting and wanted a dog with courage, intelligence, good sense of smell, speed and endurance. This dog would stay close to them as they hunted for game and would be a close companion at night by the fire. It is unknown how they achieved the dog of their dreams, first known as the Weimar Pointer, but it is believed that the breeds used to create the Weimaraner included the Bloodhound, the English Pointer, the German Shorthaired Pointer, the Blue Great Dane and the Silver-gray huehnerhund, or chicken dog. Over the decades, Germany’s forests were reduced and big game hunting became scarce. Handlers of the Weimaraner used the breed’s talent to hunt birds, rabbits, and foxes. In 1897, an exclusive club was established in Germany to maintain the breed and ensure that responsible breeders supervised its development. No one was allowed to buy a Weimaraner unless they joined the club. Strict guidelines were imposed on Weimaraner breeding. In 1929, Howard Knight, an American sportsman, was allowed to join the German club and bring two Weimaraner dogs to the US The Germans were so protective with their “gray ghosts” that although Knight promised He would protect the purity of the breed. , the club sent him two neutered dogs. However, Knight did not stop. He kept working to get some base dogs that he could breed in the US Finally, in 1938, he acquired three females and a male puppy. Females included two littermates, Adda and Dorle v. Schwarzen Kamp, and a one-year-old female named Aura v. Gailberg. The male cub was named Mars aus der Wulfsreide. Other breeders joined Knight in his quest to breed Weimaraners in the US And in 1942, the Weimaraner Club of American was formed. The American Kennel Club recognized the breed in late 1942. The breed made its formal debut at the Westminster Kennel Club show in 1943.During World War II, it became difficult for German breeders to keep their dogs, so many Featured Weimaraners were sent to the US at the end of WWII, many US servicemen brought Weimaraners home, and they quickly grew in popularity, especially when President Dwight D. Eisenhower brought his Weimaraner, Heidi, to the White House. In the mid-to-late 1950s, Weimaraners were the 12th most popular breed registered by the AKC. Unfortunately, as often happens, this led to a great deal of irresponsible breeding. As the quality of the breed declined and temperament issues became common, the Weimaraner’s popularity dropped. In the late 1960s, the number of Weim records dropped to almost half what it had been in 1957. Records continued to decline during the 1970s and 1980s. This allowed breeders to pursue the breed (not just raising puppies for sale) an opportunity to improve the health, temperament and conformation of the Weimaraner breed. Records began to rise in the 1990s, and today the Weimaraner is once again one of the most popular breeds in America. It ranks 30th out of 155 breeds and varieties registered by the AKC.

Cats always know where their owner is