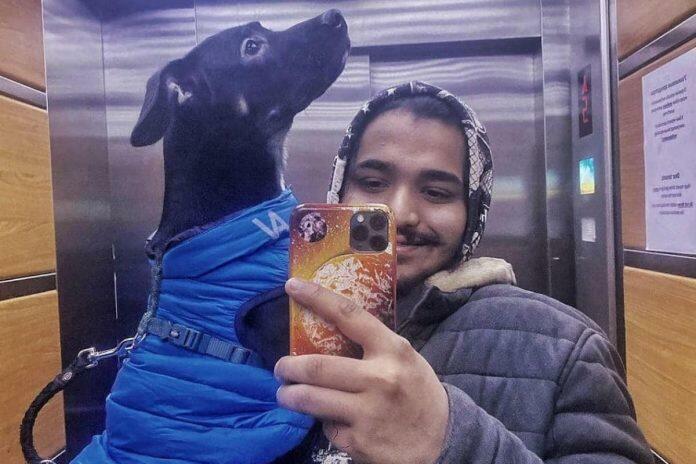 The Indian student Rhisabh adopted the street dog Malibu during his stay in the Ukraine and went with him to flee from the war. The Indian government initially refused him a return trip to his home country – now there’s a happy ending.

Like so many other people, the Indian student Rishabh wanted to flee the war in Ukraine . For three years he lived in Kharkiv, studied at the university there. About a year ago he adopted the helpless street dog Malibu and promised to always take care of him.

It was therefore completely clear to him that he would not leave his dog behind in the war country.

A few days before war broke out in Ukraine , Rishabh wanted to leave the country. His family in India were very concerned about him and begged him to get on a plane immediately. They booked him a flight home – but the Indian government threw a spanner in the works: They didn’t accept Malibu’s papers and refused him entry.

In no time at all Rishabh got all the documents, had a rabies test done and sent everything to the government. But those responsible again refused to allow Malibu the dog to enter the country.

The student therefore decided to flee on foot so as not to have to leave his four-legged friend behind. After a day-long journey, he finally reached Hungary, where he was safe from the war that had already begun.

Rishabh is back in India

But even there, the fight for Malibu’s entry continued: while numerous EU countries lifted the entry requirements for pets of refugees from Ukraine , the Indian government continued to refuse to accept the dog’s papers.

Only days later, when Rishabh had arrived in Budapest, did his student council post an update on Facebook .

Rishabh Kaushik, an Indian student who refused to leave #Ukraine without his pet dog 'Malibu', was able to return to India via Budapest.

With rishabhs and other cases garnering a lot of media attention, the Indian authorities apparently felt compelled to act and made a brief exception for the entry of their citizens’ pets. The student finally made it and boarded a plane operated by Indian airline Indigo.

Together with 219 other people, he was brought from Hungary to Delhi, where his family was finally able to hug him. Together with his beloved four-legged friend.

Read More »
PrevPreviousDiscovery: Chimpanzees use insects to heal their wounds
NextConservationists concerned: how the war in Ukraine is threatening rare wild animalsNext