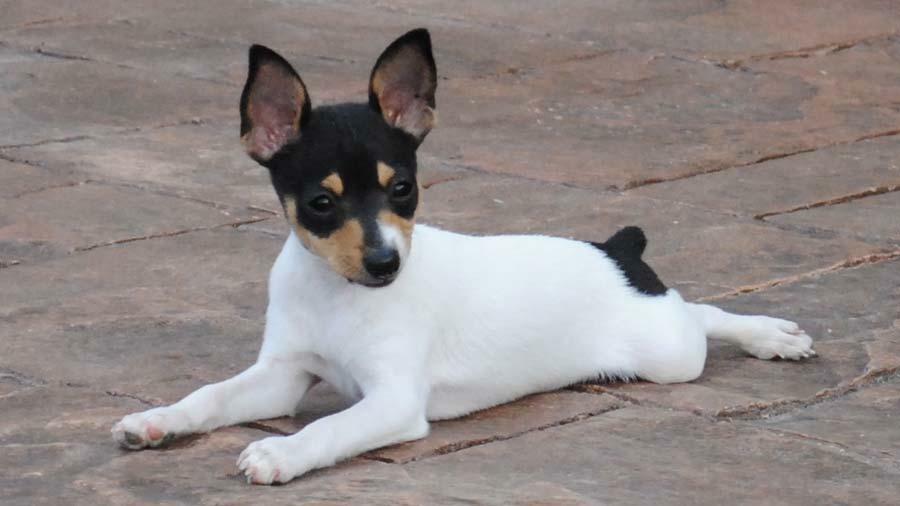 The Toy Fox Terrier is not a suitable companion for all children. Although it is a small, sturdy dog, it does not tolerate overly rough handling, especially as it is prone to breaking its legs.terrier instinct can cause it to chase small animals, so it will need close supervision if it is outdoors without a leash and a fence. The Terrier’s instinct may cause him to chase small animals, so he will need close supervision if outdoors off leash and without a fence. Supervised interaction with larger dogs is advisable. Underneath your TFT puppy’s cute exterior may lie the heart of a tyrant. Be sure to train your puppy early on to be a responsible and well-behaved member of your family. Most Toy Fox Terriers would prefer to share their bed with you. However, jumping from so high up, especially as a puppy, can lead to broken bones. Teaching your TFT to sleep in his own bed on the floor is a safer route.To get a healthy dog, never buy a puppy from an irresponsible breeder, puppy mill or pet shop. Look for a reputable breeder who tests their breeding dogs to make sure they are free of genetic diseases that can be passed on to puppies and that they have a sound temperament.

Terrier breeds have been documented in England since the 16th century. One such breed was the Smooth Fox Terrier, developed to scare foxes out of their dens while hunting. The Smooth Fox Terrier had always been very different in size, with some dogs weighing around 20 pounds while others were as small as 7 pounds. These dogs were often more prized than larger dogs as they appeared to be more feisty and more willing to jump into the fray, whether it be to hunt, hunt other animals, or defend the farm. The United Kennel Club began registering Smooth Fox Terriers in 1912. Smaller dogs were registered along with larger dogs as Smooth Fox Terriers. In the mid-1920s, fans of smaller dogs petitioned the UKC to make smaller dogs a separate breed, which was finally accomplished in 1936. The breed was registered as a Toy Fox Terrier. The TFT received recognition from the American Kennel Club in 2003. For many years there was a debate among breeders about size, some wanted a bigger dog; others wanted the dog to remain a toy. Some fanciers introduced Toy Manchester and Chihuahua blood to the breed to help fix size. This move upset other breeders who did not want contamination of other breeds in the gene pool. The UKC agreed that the dog should remain a toy and that no other breeds should be introduced into the gene pool. The Toy Fox Terrier studbook was closed by the UKC on August 31, 1960, so no further crossbreeds could be made.