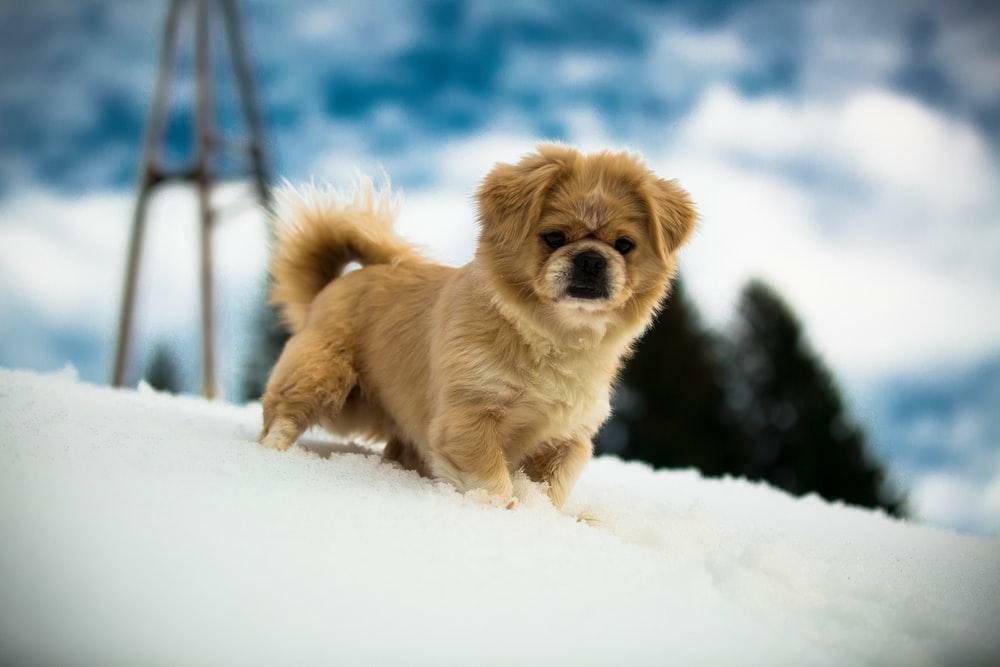 Small but active and alert, the Tibetan Spaniel dog breed hails from mountainous Tibet, where these dogs served as companions and watchdogs. They are known for their intelligence, easy-care coat and desire to watch over their family from the top of the house. Although they are purebred dogs, you may find them in the care of shelters or rescue groups. Remember to adopt. Tibetan Spaniels are adaptable dogs and can even adapt well to flat life, provided they get enough exercise and daily walks. However, they do not like to be left alone in the house for long hours. Being an affectionate and sensitive breed, these dogs crave companionship. When they don’t have it, they may start to bark or misbehave. If you can give your dog plenty of love and attention, you will be rewarded with a loyal and happy companion.

Although Tibetan Spaniels can learn quickly, they can be stubborn when it comes to obeying commands.Tibetan Spaniels shed small amounts throughout the year and need weekly brushing to get rid of dead hair.Although Tibetan Spaniels are affectionate and protective of children, they are best suited for homes with older children because they can be injured during rough play.Tibetan Spaniels generally get along well with other dogs and pets. Tibetan Spaniels get along well with other dogs and pets and are well suited for multi-dog households. They are not recommended for homes where they receive little attention or where they are left alone for long periods of time.barking can become a favourite pastime of Tibetan Spaniels if they are bored. They will also bark when people approach the door or when they hear something suspicious. Tibetan Spaniels need only moderate exercise and are quite happy with a daily walk or playing freely in a fenced yard. The Tibetan Spaniel is quite rare, so if you are buying a puppy, it may take time to find a good breeder and, once you do, you may have to wait for puppies to become available.To get a healthy dog, never buy a puppy from a puppy mill, a pet shop or a breeder who does not offer health certificates or guarantees. Look for a reputable breeder who tests their breeding dogs to make sure they are free of genetic diseases that can be passed on to puppies and breeds for a healthy temperament.

The Tibetan Spaniel is an ancient breed from Asia. Depictions of small dogs with sunken faces and lion coats date back centuries in China and Tibet. Buddhist monks, known as lamas, are believed to have bred the small dogs to sound the alarm if someone approached the lamasery. With the thick fur ruff around the neck and the richly feathered tail, they were said to resemble small lions. In Buddhist symbology, lions represent the Buddha’s triumph over violence and aggression, which is why lion-like dogs were popular. Dogs were frequently gifted to ambassadors and other notable figures, and dogs from those countries were received in return. Thus, the Tibetan dogs made their way to the courts of China and Japan, where they undoubtedly interbred with other small Asian dogs. Today’s Tibetan Spaniel probably shares a common ancestor with Japanese Chin and Pekingese. Often bred by Tibetan villagers and lamas, the first dogs of this type came in a wide range of sizes. The smallest and most treasured puppies were given to the lamaseries where they were probably bred with the most elegant dogs that arrived as gifts from China. In the late 19th century, Mrs. McLaren Morris brought the first Tibetan Spaniel to England. More arrived in the 1920s, courtesy of Dr. Agnes R. H. Greig, who sent some of the dogs to her mother. The breed gained some popularity, but its presence in England almost completely disappeared during World War II. In 1947, after several successful breeding and imports, the breed began to rebound in England. In 1958, the Tibetan Spaniel Association was formed and in 1960 the Kennel Club of England recognized the breed. The first known litter in the United States was born in 1965, to parents imported from Tibet by Mr. Harrington. Thanks to Leo Kearns, a sacristan at Trinity Lutheran Church in New Haven, Connecticut, the Tibetan spaniel began to gain attention. Kearns had a puppy from Tibbie, and her parishioners were quite enthralled with her. He imported a male, and the puppies that the two dogs produced were soon placed in loving homes. Among those enthusiastic new owners was Ms. Jay Child, who made it her mission to see the breed established in the US The Tibetan Spaniel Club of America was founded in 1971, with Child as president. The American Kennel Club recognized the breed in 1984. Despite its charm, the Tibetan Spaniel is still quite rare, ranking 101st in popularity among the breeds and varieties registered by the American Kennel Club.