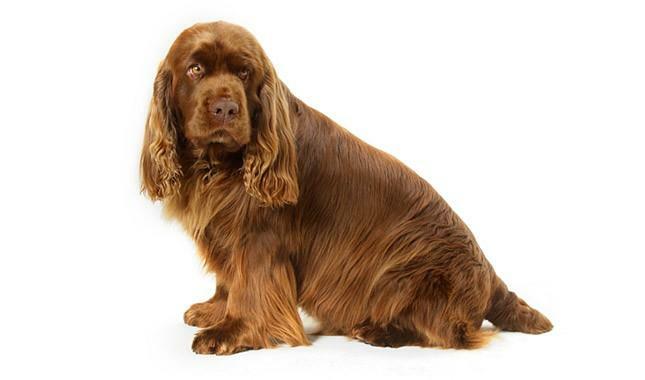 Long and low, with a unique golden liver colour, the Sussex Spaniel dog breed was developed in the county of Sussex, England, to flush birds into the air for hunters. They have a reputation for being slow and quiet, but perk up when they smell birds, and with proper training and attention, the lively Sussex is an excellent companion. They adapt very well to life in a flat and give a lot of love to their humans, but do not do so well when left alone for long periods of time. AniMall24 recommends a carrier for travelling with your small Sussex Spaniel. You should also buy a squeaky rope toy to help keep your low energy puppy active.

Sussex Spaniels are known to stretch their hind legs backwards and crawl forward, a behaviour called kipping. It is not a disorder and is nothing to worry about.Sussex Spaniels are barkers.Sussex Spaniels can be excellent companions for older children who understand how to interact with dogs.Sussex Spaniels are intelligent and can learn quickly, but they are also stubborn and require a patient and consistent trainer.Sussex Spaniels need 20 to 30 minutes of exercise daily to stay fit and healthy. Sussex Spaniels can easily become overweight if their eating habits are not controlled. Sussex Spaniels have a moderate shedding and should be brushed two to three times a week to keep loose hair under control and prevent tangles from forming. Sussex Spaniels do not like to be left alone for long periods and may become destructive or noisy if not given sufficient attention and exercise.Sussex Spaniels generally get along well with other pets and dogs, but if they are not exposed to many dogs during puppyhood, they may be aggressive towards unfamiliar dogs.

The Sussex Spaniel was developed on a farm called Rosehill in the county of Sussex, England, probably in the mid-1800s. Two men are credited with shaping the Sussex Spaniel into the dog it is today: the first was Moses Woolland, who after obtaining his first Sussex Spaniel in 1882 went out and successfully bred both show and field lines. His dogs weren’t exactly like today’s Sussex, but they were very similar. The second is Campbell Newington, who began breeding in 1887. Newington’s dogs were also similar to the Sussex Spaniel as it is today, and both men began breeding dogs together. that were consistent in type and quality. The first breed standard was written during this time. For a time the breed prospered, but after Woolland’s death, Newington was alone in his efforts to prevent the Sussex Spaniel from being forgotten. In 1909, however, J. E. Kerr became interested in the breed and began producing his own litters. Without the efforts of these two men, the Sussex Spaniel would have completely disappeared. After World War I, the Sussex Spaniel experienced a further decline in numbers and popularity. Newington gave birth to his last litter in 1921 and it looked like the Sussex Spaniel could go extinct, but the breed held its own due to its dewclaws. The privations of World War II were another obstacle, when breeding almost ceased in England. The breed’s survival is primarily attributed to the efforts of Joy Freer, who spent 60 years breeding and perfecting her lines. The first Sussex Spaniel came to the United States shortly before the Great Depression and more followed a few years later, just before the World War. II, but they failed to attract public attention. In 1969, three Sussex Spaniels were imported to the United States and then another 11 made it to America. They remain rare, but through understanding the value of these gentle and cheerful spaniels, the breed has gained a bit of respite from the threat of danger. Today, the Sussex Spaniel is ranked 154th out of 157 breeds and varieties recognized by the American Kennel Club.

An Oscar for an octopus