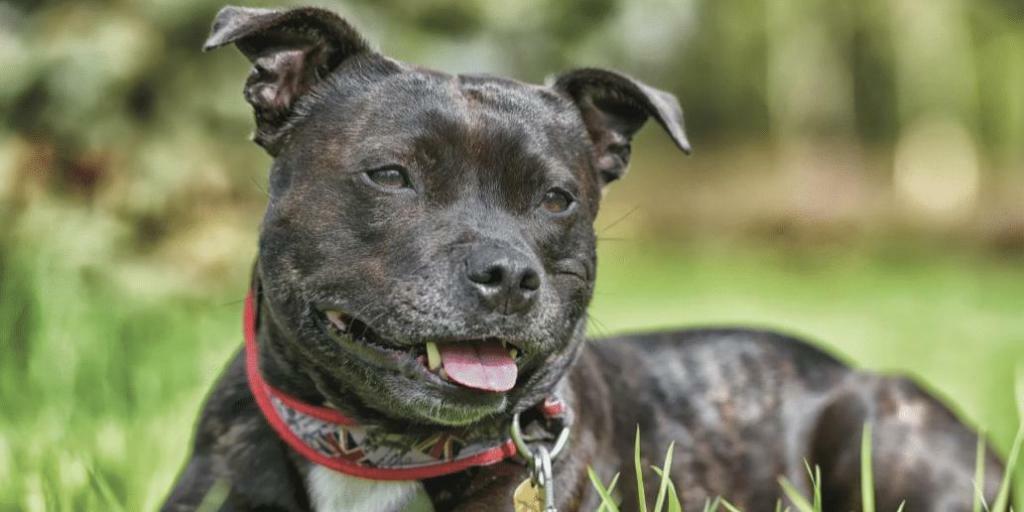 Although they were created in 19th century Britain to be a small and fast fighting dog, those days are long gone. Today’s Staffordshire Bull Terrier dog breed is a good companion known for its bravery, intelligence and love of children, and breed enthusiasts affectionately refer to them as Staffy for short. Although these are purebred dogs, you can find them in the care of shelters and rescue groups. Remember to adopt. Despite their affectionate and playful nature, Staffies do best with experienced parents who can socialise them from the start and maintain consistent training. Meet the needs of the breed and you will have a loyal and lovable family member.

The SBT should not be allowed to live outdoors. It is a companion dog and thrives in the presence of its family.Because it can be aggressive with unfamiliar dogs, a Stafford should never be walked off leash.Staffords are highly intelligent, but they are also free thinkers who like to do things their own way. They need firm, patient and consistent training.Staffordshire Bull Terriers are energetic dogs that need a brisk walk or a daily play session.SBTs enjoy their comforts and will readily join you on the sofa or bed if allowed.Staffords shed little, although they may have a heavy shed once a year. The Stafford needs early socialisation, especially if you want it to be friendly with other animals. This breed needs a confident handler who is consistent and firm, but also affectionate. Staffords love to chew, especially during puppyhood. Like all terriers, Staffords are diggers. Like all terriers, Staffords are diggers. Reinforce the underside of fences with concrete or wire mesh so they cannot dig under them.Staffordshire Bull Terriers can live well in flats if properly exercised, but the ideal place to live includes a fenced yard where they can play. Staffordshire Bull Terriers do not tolerate heat very well and should be watched on hot days to make sure they do not overheat.Staffords love children, but despite their nickname “nanny dog”, they should not be babysat. Always supervise interactions between children and dogs. If properly socialised and raised, Staffordshire Bull Terriers can get along well with other dogs and animals. It is important to understand that some Staffordshire Bull Terriers will never get along with other animals and may need to live in single-animal households.Staffordshire Bull Terriers have a strong prey drive that will send them after small animals in their neighbourhood, including cats.Staffordshire Bull Terriers have a high pain threshold and can injure themselves without any outward signs, such as whining.The Staffordshire Bull Terrier is a restricted or banned breed in many cities and the number of cities restricting the breed is increasing. It is important to research your city’s dog laws to avoid unnecessary confiscation and destruction of your dog.Staffordshire Bull Terriers are extremely mouthy as puppies and can be destructive if not closely supervised.Staffordshire Bull Terriers are protective of family members, but are not overly concerned about property. They are more likely to welcome thieves than to guard silver.Never buy a Stafford from a puppy mill, pet shop or breeder that does not offer health certificates or guarantees. Look for a reputable breeder who tests their breeding dogs to make sure they are free of genetic diseases that can be passed on to puppies and who breeds for sound temperaments.