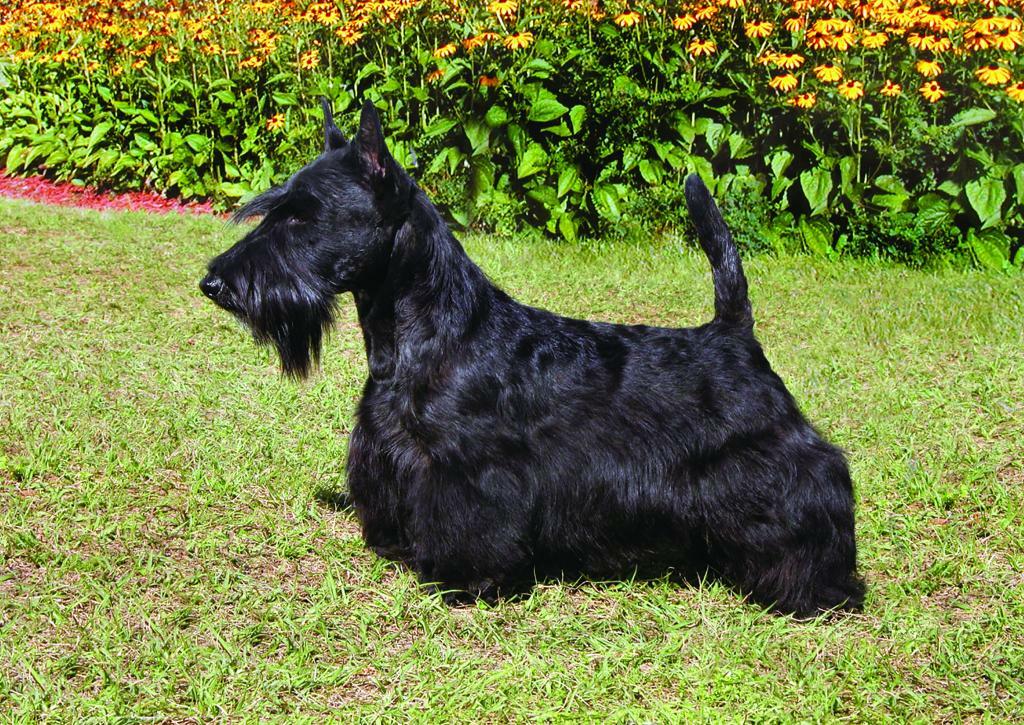 Independent and headstrong, the Scottish Terrier dog breed is also quite sensitive to praise and reproach. Independent, intelligent and fun in their dignified seriousness, they are a true terrier, which makes them an excellent watchdog. Although they are purebred dogs, you can still find them in shelters and rescues. Remember to adopt. Thanks to those incredibly short legs, your Scottie won’t train for a marathon with you – he won’t even go running with you, by the way – but he’s a perfect walking companion, especially if you appreciate his vocal attitude to bicycles and squirrels. Despite their size, they don’t bark: they have a powerful bark that can scare off the thief or the unsuspecting delivery man. They are a hit in agility and earth dog trials. You’ll enjoy a rodent-free yard with one of these dogs, but beware of the holes they’ve dug.AniMall24 recommends a carrier for travelling with your small Scottish Terrier. You should also buy a brush and massager for your long-haired pup.

Originally bred for hunting and tracking prey to the ground, the Scottish Terrier is designed to dig, and still has that drive today. It is better to find a designated digging area in your backyard than to fight an active and natural instinct.Scottish Terriers tend to be aloof with strangers and can be aggressive with other dogs if not properly socialised when young.Scotties are not low energy small dogs. They were bred as working dogs and have a lot of drive and intelligence that needs to be channelled. They need moderate exercise and daily stimulation. If you are looking for a dog that is happier sitting by your side than digging holes in your backyard, a Scottie may not be for you.Although Scottish Terriers enjoy exercise, they are not recommended as jogging companions. With their short legs, a short walk around your block can seem like a long-distance marathon for the Scottish Terrier.Behind German Shepherds and Rottweilers, Scotties have been ranked third in alarm barking. They will bark at strangers and are not the ideal pet in a home or area that has noise rules.A Scottie should have a physical fence around its yard, not an electronic one. This prevents him from chasing cats, squirrels, bicycles and other moving objects in the street. He should be on a leash on walks, because with his chase instinct, he is likely to run after an animal or scent.The Scottie is not suitable for homes with babies and young children. He is known to defend himself from unwanted pulling and pushing. He sheds little but requires significant grooming. The coat requires time for maintenance, with weekly or daily grooming in the case of show dogs. In terms of size and exercise needs, the Scottie is suited to various types of housing, including flats.To get a healthy pet, never buy a puppy from a backyard breeder, puppy mill or pet shop. Look for a reputable breeder who tests their breeding dogs for genetic health and temperament.

Despite being an ancient breed, the history of the Scottish Terrier is somewhat dark and undocumented. It is believed that the origin of the Scottie dates back to a dog that was described by Pliny the Elder in 55 BC. When the Romans invaded Britain, he wrote: “They found, to their surprise, small dogs that would follow their prey to the ground.” The Romans called the dogs terrarii, which means “workers of the land” and is derived from terra, the Latin word for land. The Scottish Terrier was a hunter and still hunts by instinct today. The Old Scotch Terrier is believed to be one of the oldest breeds in Scotland and the foundational dog for all current terrier breeds. The breed is extinct today, but was described as a stable worker with strength, courage, and endurance, who could break through the rocky lairs of its prey. The breed was a black or sand-colored dog that was short, strong, with long hair and small, half-pricked ears. Fast-forwarding from the early centuries to 1436, we find a description, in Don Leslie’s book A History of Scotland, of a small dog similar in shape to the Scottish Terrier. In the early 19th century, many writers wrote about two separate terrier breeds in Britain, the Scottish Terrier (distinguished by their coarse hair) and the English Terrier (identified by their straight hair). Earlier, in the 17th century, James I of England sent several dogs to France as a gift to the French monarch. These dogs are believed to have been the fundamental dogs of the modern Scottish Terrier. The king’s love for the breed helped increase its popularity, which increased over the next three centuries. During the 19th century, Scotland had many terriers. By the turn of the century, dogs had been separated into two different groups, the Dandie Dinmont Terriers and the Skye Terriers (although the latter was a fairly generic name given to all terriers that came from the Isle of Skye). The Scottish Terrier was grouped under the Skye Terriers and was displayed under that class in the show ring until the 1870s. At that time, the standard for the Scottish Terrier was written and, in the late 19th century, the Skye Terriers were They had divided into the four different breeds that we know today: the Scottish Terrier, the Skye Terrier, the West Highland White Terrier, and the Cairn Terrier.