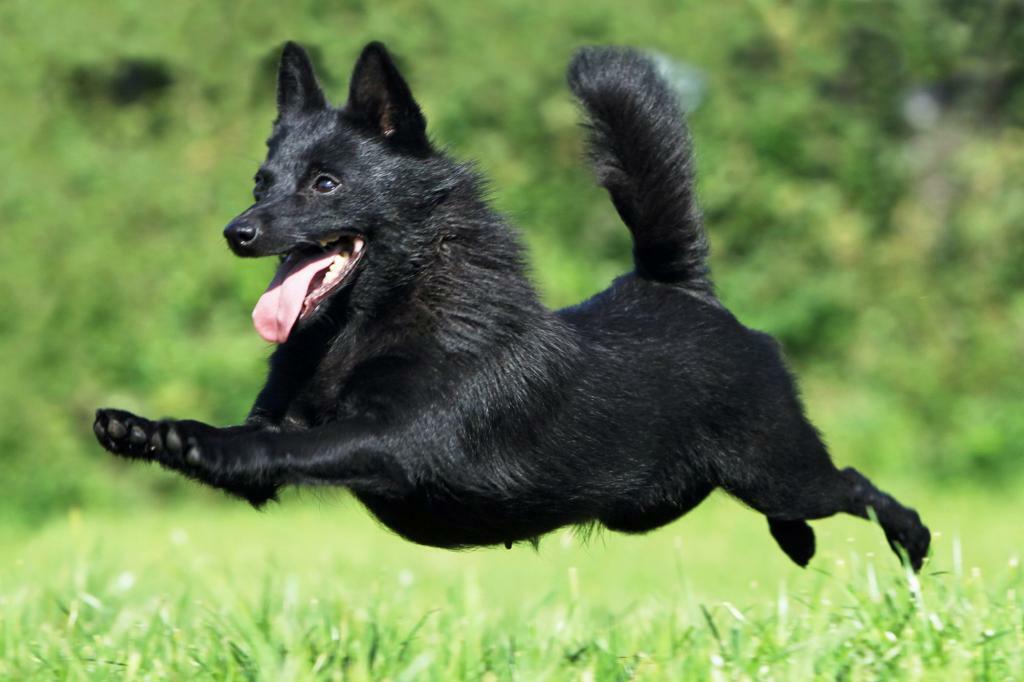 Curious and intelligent, the Schipperke dog breed is often nicknamed LBD, for little black devil. They are fearless and devoted, always on guard to protect their family from harm. Although they are purebred dogs, you may find them in the care of shelters or rescue groups. Remember to adopt. The Shipperke’s small size and easy-care coat are attractive qualities, but their intelligence and curiosity can get them into trouble. They adapt well to any home, even flats, as long as they can get plenty of exercise. However, their independent nature can be difficult for novice parents to handle. If you are able to train your dog with patience and physical activity, while maintaining a good sense of humour, you will be rewarded with a great watchdog and a happy, loving family member.

Schipperkes are a long-lived breed. It is important to understand how long a Schipperke can live and to ensure that you are committed enough to provide a good life for the dog for the next 15 or more years.The Schipperke is so independent that it is not recommended for first time dog owners.They are adaptable dogs that can cope well in any environment, including living on a boat or in a flat, as long as they get plenty of daily exercise and neighbours are tolerant of barking. Schipperkes have a high energy level and require at least half an hour of activity daily, preferably more. Weekly brushing keeps their coat clean and they do not need frequent baths.training can be challenging if not done with patience, consistency and positive reinforcement, all aided by a good sense of humour.Schipperkes are naturally wary of strangers and can be territorial with people and other dogs. The Schipperke is an ideal family dog that loves children. They can get along well with other dogs, especially if properly socialised, and get along very well with cats.Schipperkes can be noisy and will bark for entertainment and alertness.Never buy a Schipperke from a puppy mill, pet shop or breeder that does not offer health clearances or guarantees. Look for a reputable breeder who tests their breeding dogs to make sure they are free of genetic diseases that could be passed on to puppies and who breeds for sound temperaments.

The Schipperke is an ancient breed that developed in Belgium. The Schipperke is believed to be descended from a black sheepdog called the Leauvenaar, the same breed that is credited with founding the Groenendael (the Belgian Sheepdog). While the Groenendael was developed to be a herding breed, the Schipperke was developed to be a small guard dog. They were often seen guarding the boats plying the canals between Brussels and Antwerp. The Schipperke has the distinction of having one of the first “specialist shows”. This show took place in 1690, when members of the shoemakers’ guild were invited to exhibit their Schipperkes and their hammered brass collars, which were a custom of the time, on the Grand Place in Brussels.Originally known as the Spitske or Spits, the Schipperke was given its present name when the breed club was formed in 1888. The word Schipperke can mean “little shepherd” or “little captain”, either meaning would be appropriate given the breed’s heritage.The Schipperke became a fashionable pet after Queen Marie Henriette saw one at a Brussels dog show in 1885. The popularity of the breed grew and the Schipperke was finally imported to the United States in 1888.The first US specialty club for the Schipperke was formed in 1905, but the official breed club, the Schipperke Club of America, was not founded until 1929.Today, the Schipperke is loved for its intelligence, devotion and versatility, as well as its sly sense of humour. It ranks 82nd out of 155 breeds and varieties recognised by the American Kennel Club.