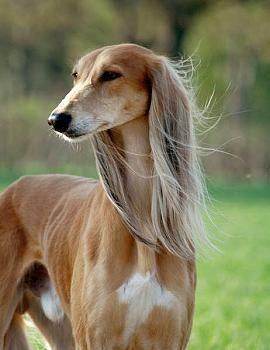 Salukis, one of the oldest dog breeds, were once considered a gift from Allah. They are fast as the wind, slender as a supermodel and quietly devoted to their people. Although they are purebred dogs, some may end up in the care of shelters or rescues. A Saluki is easy to groom, difficult to train and cannot be trusted off leash. Not suited to flat living or to being left alone in the house all day, these dogs need room to roam, preferably in a yard with a high fence, as they have a strong prey drive and will roam if allowed. They are also best kept by an experienced parent who is firm and consistent with training and who will provide the exercise they need. AniMall24 recommends a large, spacious cage to give your Saluki a place to rest and relax. You should also buy a dog toy to help burn off your puppy’s high energy.

Salukis love to run and need regular daily exercise. Salukis are a reserved breed although they are devoted to their people. Early and continuous socialisation is important for this breed to prevent shyness and fear. They require a large fenced yard where they can run safely. Underground electronic fencing is not recommended, as their prey instinct is so strong that they will overcome it.It is important to provide comfortable bedding for a Saluki, as they do not have enough body fat to provide padding.Salukis should not live outdoors. Salukis should not live outdoors, as they need human companionship and become depressed if left alone for too long.Although these dogs can be gentle, calm companions for older children, they are not recommended for households with small children.Salukis are generally quiet dogs.When training a Saluki, be consistent and use only positive reinforcement techniques, such as food rewards and praise, as the breed is very sensitive.Salukis are picky and like to be clean. Salukis are fastidious and like cleanliness. Salukis prefer the company of other Salukis, but can get along well with other dogs that do not have a dominant character. Look for a reputable breeder who tests their breeding dogs to ensure they are free of genetic diseases that can be passed on to puppies and breeds for a healthy temperament.

Once known as the Persian greyhound or gazelle hound, the saluki has long been considered one of the oldest breeds. Scientists speculate that salukis and other ancient breeds are descended from the earliest dogs and made their way around the world with their nomadic owners. Egyptian tombs from 2100 BC, some 4,000 years ago, depict saluki-like dogs with greyhound-like bodies and feathered ears, tails and legs. Even older carvings from the Sumerian empire (7000-6000 BC) show dogs with a striking resemblance to the Saluki. Pharaohs hunted gazelles and hares with Salukis, which often worked in partnership with falcons. The dogs were often honoured with mummification after death. Nomadic Muslims, who generally despised dogs as unclean animals, considered Salukis a gift from Allah and referred to the dogs with the honorific El Hor, meaning The Noble One. Salukis were the only dogs allowed to sleep inside tents. The breed may take its name from the ancient city of Saluk in Yemen, or perhaps from the city of Seleukia in Syria. Another theory suggests that the name is a transliteration of the Arabic word for hound. Salukis were widespread in the Middle East and could be found in Persia (modern-day Iran), Syria, Egypt, Palestine, Anatolia, Mesopotamia and Arabia. The first documented case of Salukis arriving in Britain was in 1840, but it was not until after World War I, when many British officers returned with them from the Middle East, that the breed became established in Britain. Interest in the Saluki took longer to take hold in the United States. The Saluki Club of America was founded in 1927, the same year the breed was recognised by the American Kennel Club. The first AKC registered Saluki was Jinniyat de Grevel in 1929. Today, the Saluki is a rare treasure, ranking 116th out of 155 breeds and varieties recognised by the AKC.