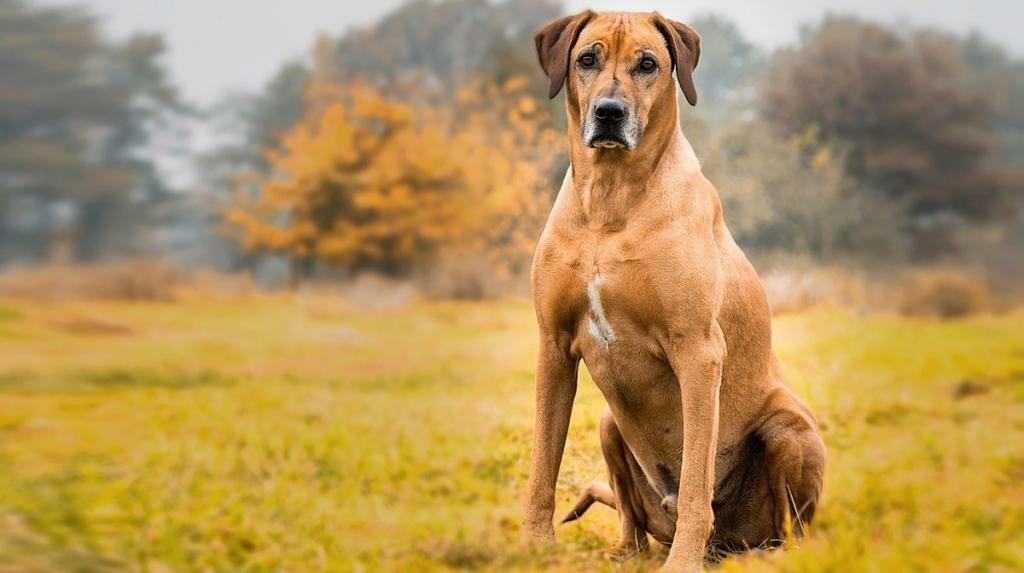 The attractive Rhodesian Ridgeback dog breed was bred in Africa to be a versatile hunter and home guardian. Today, they are less likely to hunt lions and more likely to seek a soft spot on the couch after going for a run with you.Although these are purebred dogs, some may end up in the care of shelters or rescues. Consider adoption if this is the breed for you.Rhodesian Ridgebacks are intelligent but sometimes stubborn, with a moderate energy level and an easy-to-care-for coat. However, these puppies need plenty of activity and exercise, and would not adapt as well to flat living. They are also likely to fit best with an experienced parent who can be consistent with training. Meet the breed’s needs and you will be rewarded with a loyal, lifelong companion.AniMall24 recommends a large, roomy crate to give your large Rhodesian Ridgeback a place to rest and relax. You should also purchase this dog brush and massager for your short-haired puppy.

The Rhodesian Ridgeback, formerly known as the African lion hound, was developed in South Africa by Boer farmers. The farmers needed a versatile hunting dog that could withstand the extreme temperatures and terrain of the bush, survive when water rations were scarce, protect the property and be a companion for the whole family. They began by crossing dogs they had brought from Europe – such as Great Danes, mastiffs, greyhounds and hounds – with an indigenous, half-wild dog kept by the Khoikhoi, a pastoralist people. This dog had a distinctive ridge of hair along its back, and breeders noticed that crosses with this ridge tended to be excellent hunters. When big game hunting became popular, they found that the dogs were well suited to accompany them when hunting lions on horseback. A hunter named Cornelius von Rooyen started a breeding programme in what was then known as Rhodesia (now Zimbabwe). A breed standard – a written description of how the breed should look and act – was established in 1922 and has changed little since then. In 1924, the Rhodesian Ridgeback was officially accepted by the South African Kennel Union. Some Rhodesian Ridgebacks may have arrived in the United States as early as 1911, but it was not until after World War II that large numbers were imported into the United States, Britain and Canada. The first Rhodesian Ridgeback registered by the American Kennel Club (AKC) was Tchaika of Redhouse, in 1955. Today, the Rhodesian Ridgeback ranks 54th in popularity among the 155 breeds and varieties recognised by the AKC. The Ridgeback is quite popular in South Africa, where the breed got its start, and its webbed feet help it to walk on sandy surfaces like a racket made for sand.