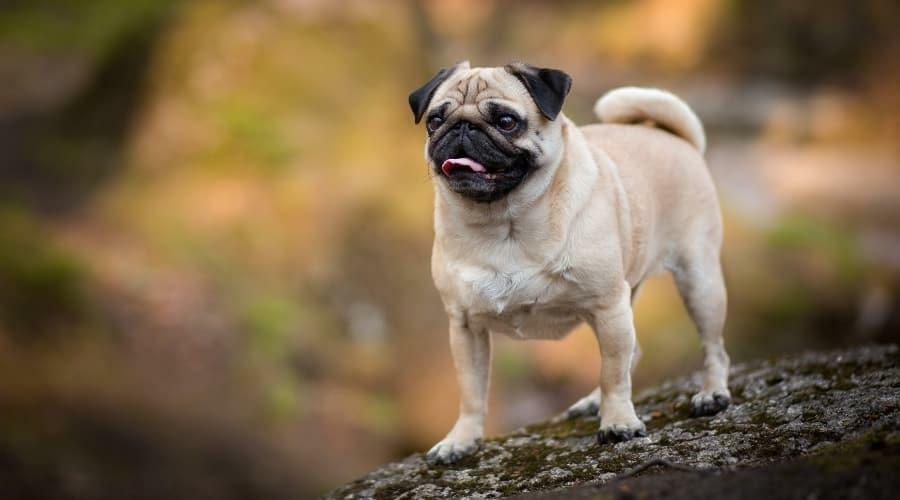 The Pug is often described as a lot of dog in a little space. These sturdy, compact dogs are part of the American Kennel Club’s Toy group, and are known as the clowns of the dog world because they have a great sense of humour and love to show off, although they are purebred dogs, you may find them in the care of shelters or rescue groups. Remember to adopt. Originally bred to be lap dogs, Pugs thrive on human companionship. They are very sensitive and, although they can make excellent flat pets, they will not like to be left home alone for many hours a day. Although these puppies have a stubborn side, especially when it comes to house training, they are playful and affectionate dogs who get along well even with novice parents. If you are looking for a loving, easy-going companion, this may be the breed for you.

Pugs can be stubborn and difficult to house train. Pugs cannot tolerate high heat and humidity due to their short muzzle (air cools as it passes through the nose of dogs with longer muzzles before entering the lungs). When your pug is outdoors, watch him carefully for signs of overheating. Despite their short fur, pugs shed a lot. Pugs huff, puff and snore loudly. Because their eyes are so prominent, pugs are prone to eye injuries. Because they gain weight easily, they can quickly become obese if food intake is not controlled. If you have a pug, expect it to follow you around the house, sit on your lap and want to sleep in bed with you. To get a healthy dog, never buy a puppy from an irresponsible breeder, puppy mill or pet shop. Look for a reputable breeder who tests their breeding dogs to make sure they have no genetic diseases that can be passed on to the puppies and that they have a good temperament.

Mastiffs originated in China, dating back to the Han dynasty (206 BC to 200 AD). Some historians believe they are related to the Tibetan Mastiff. They were prized by the emperors of China and lived in luxurious accommodations, sometimes even guarded by soldiers.Pugs are one of three types of short-nosed dogs known to have been bred by the Chinese: the lion dog, the Pekingese and the lo-sze, which was the ancient pug. Some believe that the famous “Foo dogs” of China are representations of the ancient Pug. In the late 16th and early 17th century, China began trading with European countries. It appears that the first pugs to arrive in Europe were Dutch traders, who named the breed Mopshond, a name still used today. In Holland, the pug became the official dog of the House of Orange after a pug saved the life of William, Prince of Orange, by warning him of the approaching Spanish in 1572. When William of Orange (later called William III) went to England in 1688 with his wife, Mary II, to seize the throne from James II, they took their Pugs with them.Black Pugs are known to have existed in the 1700s because the famous artist, William Hogarth, was a Pug enthusiast. He portrayed a black pug and many others in his famous paintings. In 1785, Goya also portrayed pugs in his paintings. As the pug’s popularity spread throughout Europe, it was known by different names in different countries. In France, it was called Carlin; in Spain, Dogullo; in Germany, Mops; and in Italy, Caganlino. Another famous Frenchwoman, Josephine Bonaparte, had a pug named Fortuna. Before marrying Napoleon Bonaparte, she was imprisoned in Les Carmes. As her beloved pug was the only “visitor” she was allowed, she would hide messages in her collar to take home to her family.In the early 19th century, pugs became standardised as a breed and two lines became dominant in England. One line was called the Morrison line and was apparently founded on the royal dogs of Queen Charlotte, wife of George III. The other line was developed by Lord and Lady Willoughby d’Eresby, and was founded on dogs imported from Russia or Hungary, and Pugs were first exhibited in England in 1861. The stud book began in 1871 with 66 Pugs in the first volume. Meanwhile, in China, Pugs continued to be bred by the royal families. When the British invaded the Imperial Palace in China in 1860, they discovered several Pugs and took some of the small dogs back to England. These two “pure” Chinese lines were bred and produced Click. He was an exceptional dog and was bred many times with dogs of the Willoughby and Morrison lines. Click is credited with making pugs a better breed overall and shaping the modern pug as we know it today.Pugs became very popular during the Victorian era and were featured in many paintings, postcards and figurines of the time. They were often depicted with wide, decorative collars or large ribbons around their short, thick necks.Queen Victoria had many pugs and also bred them. The queen favoured apricot-coloured pugs, while another pug fancier, Lady Brassey, made black pugs fashionable after bringing some back from China in 1886.Pugs were introduced to the United States after the Civil War, and the breed was recognised by the American Kennel Club in 1885. At first, pugs were very popular, but by the turn of the century interest in the breed waned. A few dedicated breeders continued to breed and, after a few years, the breed regained its popularity. Founded in 1931, the Pug Dog Club of America was also recognised by the AKC that year.

To drive away seagulls: Hotel guests in Venice are given water pistols