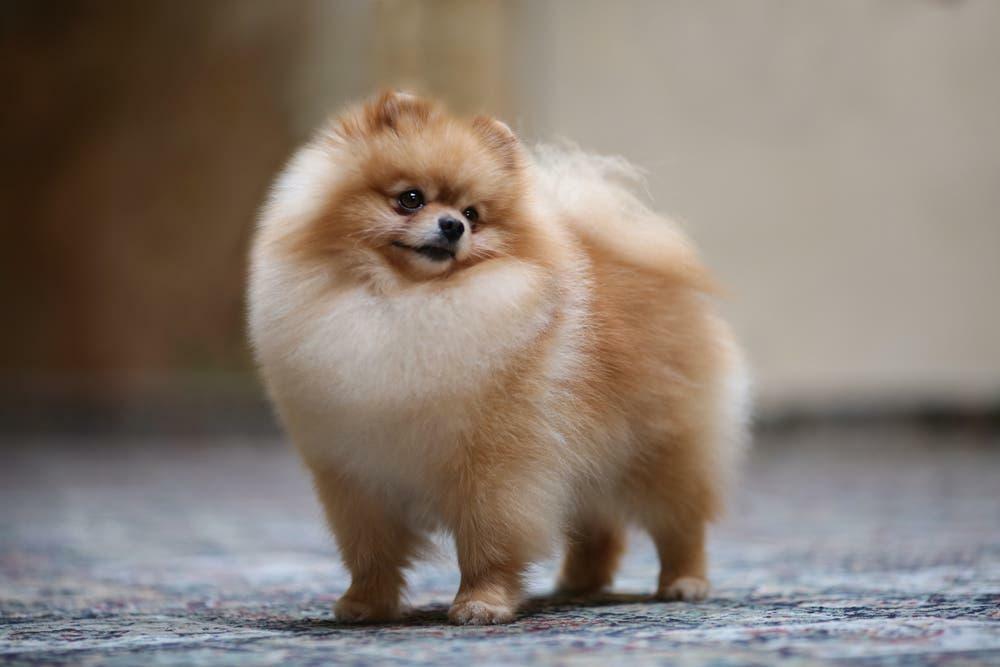 Descended from great sled dog breeds, the now diminutive Pomeranian has a long and interesting history. This fox-faced dog, nicknamed “the little dog who thinks he can”, is compact, active and capable of competing in agility and obedience or simply being a family friend.although these are purebred dogs, you may find them in the care of shelters or rescue groups. Remember to adopt. Poms may be small, but they don’t always act that way and can even challenge larger dogs. Although they make good flat pets, they can also bark a lot, which your neighbours may not like very much. But as long as you give your dog plenty of exercise and playtime, keep him out of the heat and give him lots of love and attention, you will have a furry and lovable family companion.

Pomeranians are often wary of strangers and may bark a lot. Pomeranians can be difficult to housebreak. High heat and humidity can cause your puppy to overheat and suffer heat stroke. When your Pom is outdoors, watch him carefully for signs of overheating and bring him indoors immediately. Although Pom’s are good with children, they are not a good choice for very young or very active children because of their small size. Because they are so small, Poms can be perceived as prey by owls, eagles, hawks, coyotes and other wildlife. Never leave them outside unattended, and be on the lookout for predatory birds in your locality. Because they are small and attractive, Poms are targets for dognappers, another reason why they should not be left outside unattended, even in a fenced yard. This can spell disaster if they decide to chase a larger dog they think is encroaching on their territory, or if they jump from a high place. It’s up to you to make sure your little one doesn’t hurt himself by not realising his limitations.As your Pom ages, he may develop bald patches in his beautiful coat.To get a healthy dog, never buy a puppy from an irresponsible breeder, puppy mill or pet shop. Look for a reputable breeder who tests their breeding dogs to make sure they are free of genetic diseases that can be passed on to puppies and that they have a sound temperament.

Pomeranians developed in the province of Pomerania from the old Spitz breeds of the far north. The closest relatives of the Pomeranian are the Norwegian alkhound, the schipperke, the German spitz, the American Eskimo dog, the Samoyed and other members of the spitz or northern dog group, all characterised by their wedge-shaped heads, pointed ears and thick coats. The first Pomeranians weighed up to 9 kilos. Notable people said to have owned Pomeranian-type dogs include the theologian Martin Luther, who had a Pomeranian named Belferlein that he often mentioned in his writings; the artist Michelangelo, whose Pomeranian sat on a satin pillow and watched him paint the ceiling of the Sistine Chapel; the physicist Isaac Newton, whose Pomeranian named Diamond supposedly chewed many of his manuscripts; and the composer Mozart, whose Pomeranian was named Pimperl and to whom he dedicated an aria. In 1761, the appeal of Pomeranians moved to England when Sophie Charlotte, a 17-year-old princess from Mecklenburg-Strelitz (a neighbouring province of Pomerania) married the English prince who was to become King George III. She brought with her a couple of mostly white dogs named Phebe and Mercury, who weighed more than six kilos, which was the norm at the time. Although popular in royal circles, the new breed was not very popular with the public, which changed during the reign of Queen Charlotte’s granddaughter, Queen Victoria. During her 64 years as Queen of England, Queen Victoria bred more than 15 different breeds of dogs. In her later years, she was particularly fond of Pomeranians, which she first saw in 1888 during a trip to Italy. She fell in love with a red and sable Pomeranian named Marco, who weighed only 5 kilos. Today, many believe he was the inspiration for breeding smaller Pomeranians. Victoria also bought three other Poms on the same trip to Florence in 1888. After Marco, Victoria’s next most famous Pom was a female named Gina who also became a champion at the London dog shows. Victoria’s love for Pomeranians, especially the smaller ones, inspired English fanciers to start breeding even smaller Poms. From 1900 until the 1930s, Pomeranians were often the most entered in the Crufts dog show, Britain’s national championship. It was during this time that the breed standard stabilised, the size dropped to its present weight and the coat developed its characteristic deep pucker. It was also during this time that the range of colours available was extended. Early Poms were mainly white, black, chocolate or blue, but after an orange dog began to win at dog shows in the 1920s, the range of colours expanded, and the Pom’s popularity spread across the Atlantic. In 1888, a Pomeranian named Dick was the first Pom entered in the American Kennel Club (AKC) stud book. In 1892, the first Pom was entered in a dog show in New York. After the AKC recognised the breed in 1900, the popularity of the Pomeranian grew rapidly in the United States. In 1909, the American Pomeranian Club was accepted as a member club of the AKC and designated as the parent club of the breed. By mid-century, Poms were one of the most popular dog breeds in the United States. Today they rank 14th out of 155 breeds and varieties registered by the AKC.