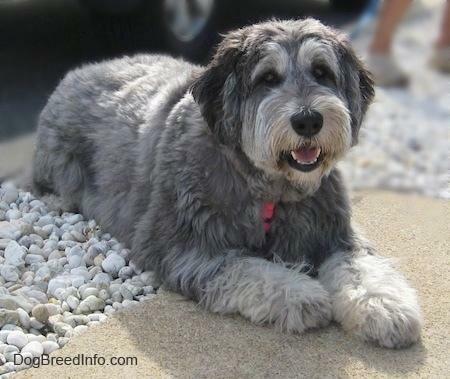 Originally bred for herding and guarding, the Polish Lowland Shepherd is still an excellent working dog breed. They are obedient and fearless, good-natured with people and other dogs, but very protective of their flock. Although they are purebred dogs, you may find them in the care of shelters or rescue groups. Remember to adopt. Don’t go shopping if you want to take a dog home.Polish Lowland breed dogs are intelligent, active, strong and handsome with their characteristic multi-coloured, shaggy coat. In recent years, they have gained popularity as a companion dog. They are very affectionate with their human families and can even adapt to flat life. However, novice pet parents should be careful, as these puppies need a lot of exercise and their coat requires frequent grooming sessions to keep it tangle-free. If you can provide plenty of physical activity and don’t mind a little extra brushing, this may be the breed for you.

The PON appreciates a good meal and prefers to repeat the experience often each day. Don’t give in when he gives you that pathetic, hungry look. Since he does not control his food intake, you should: feed him only the amounts appropriate for his size and age, and remember that snacks and treats count.That cute, fluffy PON puppy can easily fool you into thinking he is a docile dog who will follow your every whim. Not so: the PON has a very strong personality, even when young. It thinks for itself. This is a good trait for a working dog, but it also means that its owner must be firm, fair and persistent. The PON loves his family, but is aloof and distrustful of strangers. Don’t expect him to greet dinner guests with a friendly look and wagging tail. Proper socialisation is essential to encourage the PON to feel comfortable with a variety of people, so get him out among friendly strangers early on. Although not hyperactive, the PON has a lot of energy and stamina. If he doesn’t get enough physical and mental stimulation, he will become bored (as they all do), which can lead to excessive barking, biting or digging. To avoid behavioural problems, keep the PON busy with activities and don’t leave him alone for long periods of time.Although the PON’s shaggy coat is adorable, let’s face it: it requires a great deal of grooming. If that’s not your thing, or if you can’t delegate the job to another willing family member, consider choosing another breed.To get a healthy pet, never buy a puppy from a backyard breeder, puppy mill or pet shop. Look for a reputable breeder who tests their breeding dogs for genetic health and temperament.

The Polish Plain Sheepdog is an ancient breed. It is believed to be descended from the Puli, a Hungarian herding dog, as well as from Central Asian dogs such as the Tibetan Mastiff, Tibetan Spaniel, Lhasa Apso and Tibetan Terrier. An intriguing – and not impossible – theory is that the Huns were responsible for the spread of the breed to many different countries as they plundered their way through various cultures.In 1514, a Polish merchant named Kazimierz Grabski sailed from Gdansk to Scotland with a cargo of grain to trade for Scottish sheep. He had six PONs on board to herd the sheep and, as the story goes, a Scottish shepherd asked him for a pair of PONs in exchange for a ram. The shepherd got a deal: two female PONs and one male. It is believed that these three dogs were used to crossbreed with Scottish dogs and develop the Bearded Collie. In the 19th century, as sheep herding declined in Poland, the number of PONs also declined. World War II, which brought terrible devastation to Poland, nearly decimated the breed. Luckily, a Polish veterinarian named Dr. Danuta Hryniewics took matters into her own hands. She began working to save the breed with the help of her own PON, a male named Smok. Smok sired 10 litters of Pon in the 1950s; in 1958 the first litter with a full pedigree was born. By 1969, his Kordegardy kennel had produced over 140 puppies, including many champions. In 1959, a breed standard for the PON was drafted and accepted by the Fédération Cynologique Internationale. In 1979, an American Bearded Collie breeder named Moira Morrison learned of the PON’s ancestry in her breed. Four years later, Kaz and Betty Augustowski, both of Polish origin, saw an advertisement in a dog magazine and acquired their first PON. For the next 18 years, they were passionately involved in getting the breed recognised by the American Kennel Club. Their efforts were rewarded when PONs entered the Miscellaneous class on July 1, 1999, and the AKC granted the breed full recognition on August 1, 2001.