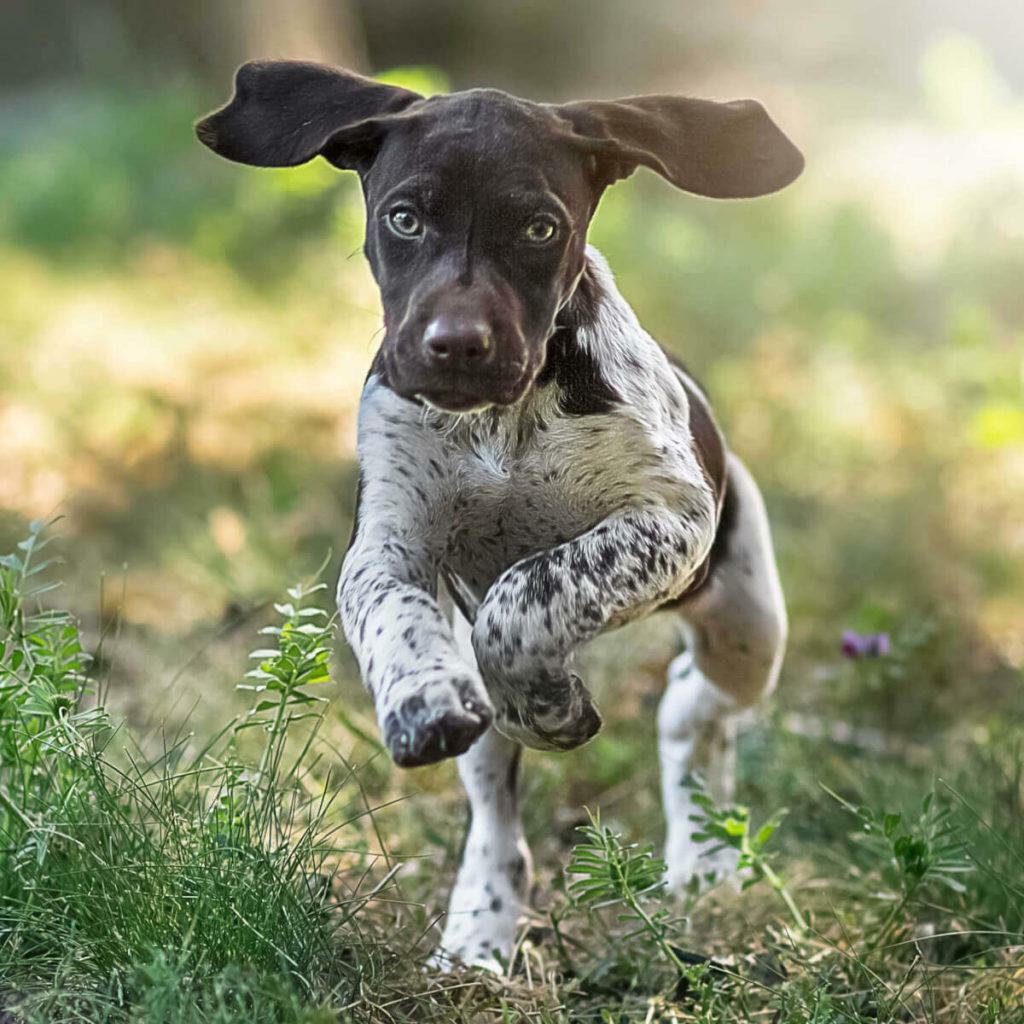 Bred for several hundred years to “target” poultry and small game such as rabbits, the Pointer is a versatile field dog and an exceptional family dog breed. They excel in many areas, from the field to the show ring to agility and obedience. However, flat dwellers should be careful. These dogs need plenty of room to play and plenty of daily exercise to keep their high energy under control. Otherwise, they may find their own fun by acting out unwanted behaviour.AniMall24 recommends a dog bed to give your medium-sized Pointer a good night’s sleep. You should also choose this dog brush and massager for your short haired puppy.

Pointers are very active and require vigorous exercise every day. If you do not have the time or energy to exercise your Pointer at least one hour each day, then you should not buy a Pointer.Pointers can be very destructive when they become bored or do not get enough exercise, especially when they are young. This can result in chewing, digging, and many other negative behaviours that can lead to expensive vet bills and replacement costs.Pointers are wonderful family dogs that thrive when they can spend time with their people. A Pointer should not live outdoors, but should enjoy the same comforts as its family.Although Pointers get along very well with children, especially when raised with them, they are not best suited for homes with small children. They can be rambunctious as puppies and may unintentionally injure small children by knocking them down or pawing them with that tail wag.Pointers are not suitable for flat dwellings; they do much better in homes with a large fenced yard where they can expend some of their energy.Pointers generally do well with other dogs and other domestic animals, especially if they have been raised with them. However, they can be very interested in pet birds, and both should be protected from each other. You don’t want your Pointer to get hurt by a parrot’s beak, and you don’t want him trying to retrieve your parrot, canary or finch.Pointers are strong and energetic with a mind of their own. They are not a good choice for first time dog owners or for people who are not strong enough to handle them and give them the exercise they need.Training is a must with this breed because it has a will of its own. Training can take time, but once the groundwork is laid, there is no limit to how far Pointers can go in various dog competitions.Pointers have an average moult and require only minimal grooming.To get a healthy dog, never buy a puppy from an irresponsible breeder, puppy mill or pet shop. Look for a reputable breeder who tests their breeding dogs to make sure they have no genetic diseases that can be passed on to the puppies and that they have a good temperament.

The term “Pointer” was used to describe any breed of hunting dog that would take aim at the game it hunted. They are believed to have originated in Spain, although, like most breeds, their history is somewhat murky. Pointers are said to have been known in England as early as 1650, but it is also believed that English officials brought Spanish Pointers from the Netherlands – then under Spanish control – in 1713 after participating in the War of the Spanish Succession. The Spanish Pointers were larger, heavier and slower dogs than the Pointer we know today, but their strength – so to speak – was their instinct for marksmanship, and they were used to reinforce that characteristic in British dogs. The look of the modern Pointer was developed in England, probably through crosses with the Foxhound, Greyhound, Bloodhound and, later, with various setters, and hunters hoped to breed with the scenting ability and build of the Bloodhound, the speed, elegance and grace of the Greyhound, and the scenting ability, easy maintenance, well-developed ribcage and stamina of the Foxhound. Later, they crossed Pointers with various types of setters to improve the temperament, which at the time was described as fierce. It is clear that they were successful. In the end, they created an ideal hunting dog that became a favourite of many of England’s aristocrats. Two of the most famous British pointers were Pluto and Juno, owned by a Colonel Thornton, who are said to have held the point on a flock of partridges for just over an hour. They remind me of the old joke about a hunter who lost his Pointer on the moors. It is very likely that the Pointer came to America with the early settlers, but its presence is not really documented until the Civil War era. Sensation, a beautiful lemon and white Pointer imported in 1876 from England, is the emblem of the Westminster Kennel Club, founded in 1877. If you have ever been fortunate enough to attend the Westminster Kennel Club show, you will have seen Sensation’s silhouette on the front cover of the catalogue. The AKC recognised the Pointer in 1879 and the American Pointer Club was founded in 1938. Today, the Pointer is an attractive but rare dog, ranking 103rd among breeds registered by the American Kennel Club.