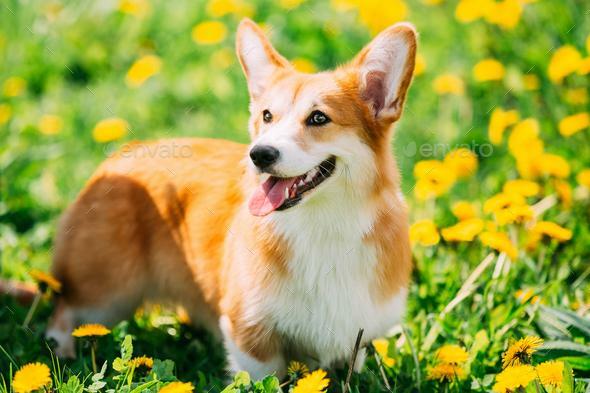 Originally bred to herd cattle, sheep and horses, the Pembroke Welsh Corgi is an active and intelligent dog breed. Easy to train and eager to learn, Pembrokes are great with children and other pets, and can be found in four different coat colours and markings. Although they are purebred dogs, you may find them in the care of shelters or rescue groups. Remember to adopt. Adaptable and affectionate with the whole family, Corgis can fit into almost any home, whether it’s a flat or a large house with a yard. However, they are quite energetic for a small dog. They need lots of walks and active play sessions. You will be amazed at how quickly these short-legged puppies move. For humans who can meet the needs of the breed, the Pembroke will make an excellent family companion, even for novice parents.

Pembrokes are noisy dogs that tend to bark at everything and everyone, and although they are intelligent, they can also be stubborn. Their strong herding instinct can cause them to nip at children’s heels when playing. Although they are small dogs, Pembrokes have a lot of energy and need a healthy amount of exercise each day. To get a healthy dog, never buy a puppy from an irresponsible breeder, puppy mill or pet shop. Look for a reputable breeder who tests their breeding dogs to make sure they are free of genetic diseases that can be passed on to puppies and that they have a sound temperament.

Originally from Pembrokeshire, Wales, the Pembroke Welsh Corgi is a charming dog whose origins are steeped in folklore. According to Welsh legend, the Pembroke Welsh Corgi emerged from the lairs of fairies and goblins. According to legend, one day two children were out in the fields tending their family’s livestock when they came across a pair of puppies. The children thought they were foxes, but recognising something different about them, they tied them up and took them home. Their parents immediately saw that the puppies were not foxes, but dogs, and told their children that the puppies were a gift from the fairies who lived in the fields. The fairies used them to pull their carriages and sometimes to ride in battles. As proof that the Pembrokes were indeed the fairies’ mounts, the parents pointed to the marks on their backs where the fairies’ saddle had been placed on their shoulders. The children were delighted and cherished their puppies. As they grew up, the dogs became treasured companions and learned to help the children look after the family’s livestock.For those who do not believe in fairy tales, there are historians who say that the Pembroke Welsh Corgi is descended from Vallhunds, Swedish cattle dogs that were brought to Wales by the Vikings in the 9th and 10th centuries. Others believe they are descended from dogs brought to Wales by Flemish weavers in the 12th century. Farmers who had working dogs in the past bred the best dogs for the tasks they wanted them to do. In the 1920s, the UK Kennel Club recognised Corgis as purebred dogs. They were officially known as Welsh Corgis when they were first shown in 1925. At that time, Pembrokes and Cardigans were shown in the same class as one breed, then in 1934, the Kennel Club recognised the Pembroke and Cardigan as two separate breeds. In the same year, the American Kennel Club did the same. The Pembroke was first shown in the USA in 1936. The Pembroke has gradually gained popularity in the USA, and today, they are among the top 50 most popular breeds for family pets. They are also popular with Her Majesty, Queen Elizabeth II of England, who received her first Pembroke Welsh Corgi from her father (King George VI) in 1933.The puppy was named Rozavel Golden Eagle and was a playmate for Elizabeth and her sister, Margaret. Since then, Elizabeth has adored the puppies and now has a pack of them roaming around Buckingham Palace.