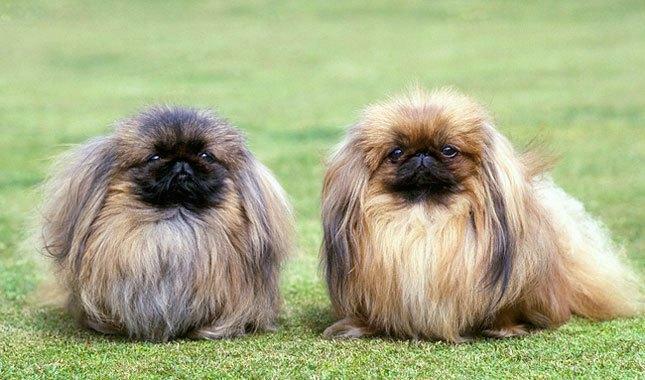 Pekingese dogs were bred for centuries to be the most beloved companions of China’s imperial family. Today they are still cherished family companions and show dogs that greet everyone they meet with dignity and grace. Although they are purebred dogs, you may find them in the care of shelters or rescue groups. Remember to adopt. The Peke is an adaptable dog that can live with almost anyone, including flat dwellers and novice pet parents. However, they do have a tendency to bark, which may not excite neighbours. They also tend to become attached to a single human caregiver. Children may injure them during rough play, so they are best suited to households with teenagers and adults. If you can meet the needs of this breed, you will have a loving and loyal companion who will not want to be separated from you.

According to Chinese legend, a lion once fell in love with a marmoset, a type of monkey. To marry his love, the lion begged Buddha to reduce him in size, but to let him keep his big heart and lion-like character. Buddha agreed, and from the union of the two descended the Fu Lin dogs, the lion dogs of China. The breed is truly ancient, with DNA evidence confirming it as one of the oldest dog breeds. The Pekingese is believed to have existed in China for 2,000 years. Named after the capital, Peking, it was the companion of nobles, princes and members of the imperial family. The Pekingese was closely guarded and never allowed to leave the palace, let alone the country, but came to the attention of the Western world in the wake of the Opium War in 1860. When British troops entered the imperial palace after invading Peking, one of their discoveries was five Pekingese dogs guarding the body of their owner, who had committed suicide before being captured. The dogs became prizes of war and were taken to England, where two were given to the Duchess of Wellington, two to the Dukes of Richmond and Gordon, and one to Queen Victoria, who named him “Looty”. A dog named Pekin Peter is said to be the first Pekingese to be exhibited at a British dog show, in 1894. At that time, the breed was known as the Chinese pug or Pekingese spaniel. In 1904, a Pekingese club was formed and, naturally, the popularity of the Pekingese spread across the Atlantic to the United States. The first Pekingese registered by the American Kennel Club was Rascal, in 1906, and the Pekingese Club of America was formed in 1909. Today, the breed is ranked 49th out of 155 breeds and varieties registered by the AKC.