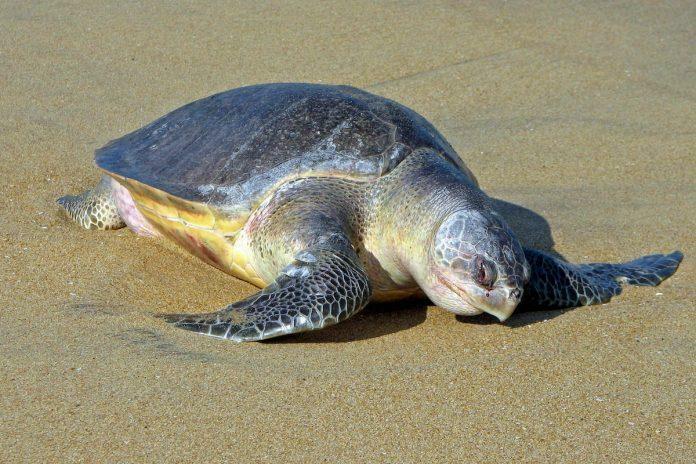 The olive ridged turtle is considered endangered and lays its eggs once a year on the beach at La Flor in Nicaragua. In order to protect the rare animals from humans and other animals as they lay their eggs, the military guarded the turtles this year.

Every year, numerous representatives of the olive ridged turtle return to La Flor beach in Nicaragua to lay their eggs. They dig nests in the sand in which to bury the valuable cargo. However, people who trample the nests or even deliberately plunder them have been endangering this important project of the rare species for years.

In order to offer the animals more protection, the military was called to the beach this year: The armed soldiers gave the thousands of turtles protection when laying their eggs, guarded the beach and made sure that the sea creatures were not disturbed by humans or wild animals. Because some specimens were so exhausted from laying eggs, the soldiers even helped them find their way back to the sea.

With a length of around 70 centimeters and a weight of 40 kilograms, the olive hybrid turtle is one of the smallest species among the sea ​​turtles . It is most common in the Indian and Pacific Oceans and often ends up as bycatch in fishermen’s nets. But also through the targeted hunt for the animals, their population has shrunk significantly.

When they lay their eggs, the adult turtles lay around 90 eggs in the nest in the sand and then disappear back into the sea. After 40 to 70 days, the offspring hatch, which is often prevented from growing up by fish, seabirds and humans. Therefore, out of 100 hatched olive ridged turtles, only three will reach adulthood. The Nicaraguan military hopes to give the offspring a higher chance of growing up successfully with their protective measures.

Read More »
PrevPreviousLos Angeles: Dead puppy found in the trash can at the airport
NextOnline animal market: This is how you recognize fraudsters and dubious offersNext