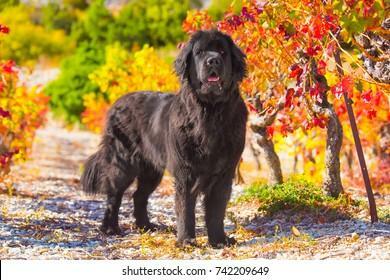 The Newfoundland is a large, strong breed of dog, originating from Newfoundland. Originally used as a working dog to pull fishermen’s nets and transport wood from the forest. They are a strong swimmer and an equally strong “pack horse”. AniMall24 recommends a large, spacious cage to give your Newfie a place to rest and relax. You should also buy a dog wormer for your puppy with lots of shedding.

The Newfoundland is a large dog when it grows up. Although he is a calm dog, he is not a typical one-room flat dog and would probably be happier in a more spacious environment. If you can’t stand drooling dogs, the Newfoundland is not for you. This breed drools. To keep the Newfoundland’s thick coat looking great, it needs regular grooming. You can do this yourself, which is time-consuming, or you can hire a professional groomer, which can be expensive.The Newfoundland thrives in cool climates, although it can adapt to living in warmer climates. To protect it from heat stroke, keep it near air conditioning or fans in very hot weather.To get a healthy dog, never buy a puppy from an irresponsible breeder, puppy mill or pet shop. Look for a dog from a shelter, rescue group or reputable breeder who tests their breeding dogs to make sure they are free of genetic diseases that can be passed on to puppies and that they have a healthy temperament.