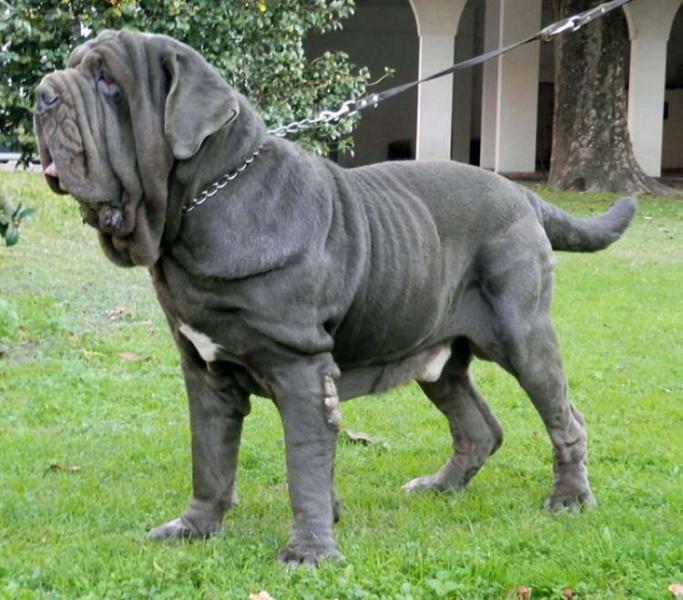 The Neapolitan Mastiff dog breed developed in southern Italy as a family and guard dog. Some breed fanciers affectionately call them Neo and others know them as Mastino. Although they are purebred dogs, you can still find them in shelters and rescues. Remember to adopt. Neapolitan Mastiffs may not be the best choice for novice dog parents or flat dwellers. Their enormous size means they need space and safe training to thrive. However, if you can handle their needs and a little drool, you will find a loving and loyal companion that loves the whole family! AniMall24 recommends a large, spacious crate to give your large Neapolitan Mastiff a place to rest and relax. You should also buy a dog brush and massager for your short-haired puppy.

Neapolitan Mastiffs do best in homes with a yard they can patrol. Neapolitan Mastiffs are generally clumsy and have trouble going up and down stairs, especially as puppies. The Neapolitan Mastiff is a medium shedding dog and requires weekly brushing, as well as great attention to cleaning the wrinkles and creases in their fur. Socialise them early and often so that they learn to behave with other people and animals.Neapolitan Mastiffs can be lazy and will become obese if they do not get plenty of exercise. Make sure your dog maintains a healthy weight to avoid diseases that can significantly reduce its lifespan.The Neapolitan Mastiff is not recommended for a timid or first time owner. This breed needs a confident handler who is consistent and firm, but also affectionate. The Neapolitan Mastiff has a fearsome appearance and a deep bark, which are often more than enough to deter even the most reckless offenders.The Neapolitan Mastiff has a number of habits that some consider offensive: drooling, slobbering, panting, growling, snorting and flatulence.This affectionate dog is unaware of its size and will happily curl up on you or beside you. [Note: We know a Neo whose family puts up the Christmas tree on Halloween and doesn’t take it down until February because he loves to lie around the tree, and they have the couch to themselves for a few months]Neapolitan Mastiffs love to be outdoors, but they also love to be with their family. They should live indoors with their people, not alone in the backyard.Young Neapolitan Mastiffs are rambunctious, but it is important for their orthopedic development to keep them from jumping too much or climbing stairs until they reach physical maturity.Neapolitan Mastiffs can be destructive if they get bored. Neapolitan Mastiffs can be destructive if bored, so provide them with regular exercise, social interaction and training to keep their lives interesting. Never buy a Neapolitan Mastiff from a puppy mill, pet shop or breeder that does not offer guarantees or health certificates. Look for a reputable breeder who tests their breeding dogs to make sure they are free of genetic diseases that can be passed on to puppies and who breeds for sound temperaments.

Mastiff-type dogs have existed for millennia. It is believed that the first mastiffs developed in Tibet, some 5,000 years ago. The dog that became the Neapolitan Mastiff developed in southern Italy, around Naples, from which it takes its name. Neapolitan breeders focused on creating a large dog with a heavy, loose skin to protect them in case of attack. The Neo, or Mastino, as they are also called, might have remained forgotten in Italy were it not for the chance attendance at a dog show in Naples in 1946 by journalist Piere Scanziana. He saw the Neapolitan Mastiff and recognised the breed for what it was: a living vestige of the Roman Empire, descended perhaps from the Epirus Mastiffs that accompanied the Roman Consul Paolo Emilio on his triumphal entry into the city after defeating Perseus of Macedon.Scanziani took an interest in the breed and worked to make it better known. He was instrumental in the drafting of the breed standard and in the recognition of the Neo by the Italian national dog registry. The dogs were given the name Mastino Napoletano. One of Scanziani’s dogs, Guaglione, became the first member of the breed to become Italian champion. The breed was recognised by the international dog registry, the Federation Cynologique Internationale (FCI), in 1949. By the early 1970s, the Neo had gained some popularity in Europe. The first known Neo in the United States was imported by Jane Pampalone in 1973, although Italian immigrants may have brought some of the dogs with them as early as the 1880s. The Neapolitan Mastiff Club of America (NMCA) was formed in 1973 and kept a record of the pedigrees, lineage and ownership of most American Neapolitan Mastiffs. The other function of the club was to educate people about their beloved breed, and in the 1990s, the American Neapolitan Mastiff Association and the Neapolitan Mastiff Club of America were formed. The American Kennel Club recognised the breed in 2004.