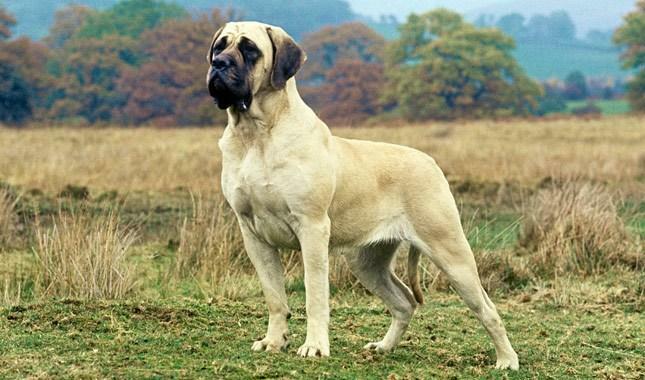 The Mastiff is one of the oldest types of dog breeds. Its ancestor, the Molosser, was known 5,000 years ago. Back then, they were fierce war dogs, very different from the benevolent behemoth that is the breed today. Mastiffs are sometimes called Old English Mastiffs. Although they are a purebred dog, you can find them in shelters and rescues. Remember to adopt. Mastiffs make good companions for anyone who can accommodate their large size and doesn’t mind a little drool here and there. Flat dwellers and first-time dog owners may want to consider another breed. But if you are looking for a big dog with a lot of love to give, this may be the dog for you! AniMall24 recommends a large, roomy crate to give your big mastiff a place to rest and relax. You should also buy a dog brush and massager for your short haired pup.

Mastiffs need daily exercise, but the age of the dog and the temperature should be taken into account. The mastiff is considered a short-lived breed, but some mastiffs have lived up to 18 years. A dog is a lifelong commitment, and if you are attracted to the breed because of the possibility of a short life, you may want to re-evaluate your choice.Mastiffs drool and are prone to gas, but other than that, they are fairly clean. If their drool bothers you in any way, they may not be a breed for you.Mastiffs are not the best choice for families with very young children or frail elderly people. A Mastiff can easily knock over a child or an unstable adult.Mastiffs can do quite well in flats and houses with small yards if properly exercised, but are not really recommended for small homes because of their size. The ideal environment for a Mastiff is a house with a large yard. Mastiffs can have strong protective instincts and need to be properly socialised with both people and animals. If not properly socialised, they can become fearful of new situations and shy with strangers, which could lead to biting.Socialising your Mastiff with other animals will help ensure that your Mastiff has a happy and healthy life. If Mastiffs are not well trained and socialised they can develop aggression towards other animals, and their size and strength make them dangerous if they do not know how to interact with them.Mastiffs have an easy to care for coat, but shed a lot.When Mastiffs reach adulthood and overcome their clumsiness and energy, they make wonderful companions who are calm, quiet, well-mannered and self-confident. They are excellent watchdogs, although they tend not to bark as much as other breeds. Mastiffs need training to be handled easily despite their size. Mastiffs are not recommended for new or timid owners. They respond best to positive reinforcement, especially if it involves lots of hugs and praise.Mastiffs snore, snort and growl…loudly.Mastiffs tend to be lazy and need daily exercise so they do not gain too much weight.All dogs thrive when they are with their family in the house, and the mastiff is no exception. They should sleep and live in the house, not in the yard. To get a healthy dog, never buy a puppy from an irresponsible breeder, a puppy mill or a pet shop that comes from a puppy mill.

The mastiff is descended from one of the oldest types of dog, the molosser, which probably originated in the mountains of Asia, perhaps in Tibet or northern India. These molossers were solidly built, with heavy bones, short muzzles, short, well-muscled necks and pendulous ears. Their ancestry can be seen not only in the mastiff, but also in the Tibetan mastiff, St. Bernard, Rottweiler, Dogue de Bordeaux and many other modern breeds. Archaeologists excavating the palace of the Babylonian ruler Ashurbanipal discovered bas-reliefs from the 7th century BC – more than 2,500 years ago. more than 2,500 years ago – of a mastiff-type dog fighting lions. Dogs made their way throughout the known world, arriving with armies or carried by traders, and wherever they went, they were prized for their size and courage. Kublai Khan is said to have kept a kennel of 5,000 mastiffs used for hunting and warfare. When Hannibal crossed the Alps, he did so with trained war mastiffs. During his crossing, the war dogs interbred with local dogs, and their offspring became the basis for the St. Bernard, the Rottweiler and other breeds. Even the pug, described as a miniature mastiff, can claim Molossian heritage. In England, where the modern mastiff was developed, the huge dogs guarded estates and patrolled the grounds at night. Lyme Hall was famous for its line of mastiffs, which were bred from the 15th to the early 20th century and helped save the breed from extinction. However, the rise of dog shows in the mid-19th century contributed to the resurgence of the mastiff. It was nearly extinct again during World Wars I and II because food shortages made it impossible to feed them, but a pair of mastiff puppies imported from Canada after World War II helped to bring them back.Mastiffs probably came to the United States in colonial times, but it was not until 1879 that the first mastiff club was formed in this country. The American Kennel Club recognised the breed in 1885, and a Mastiff named Bayard was the first of his breed to be registered with the AKC. The present Mastiff Club of America was formed in 1929 and continues to watch over the breed, almost 80 years later.