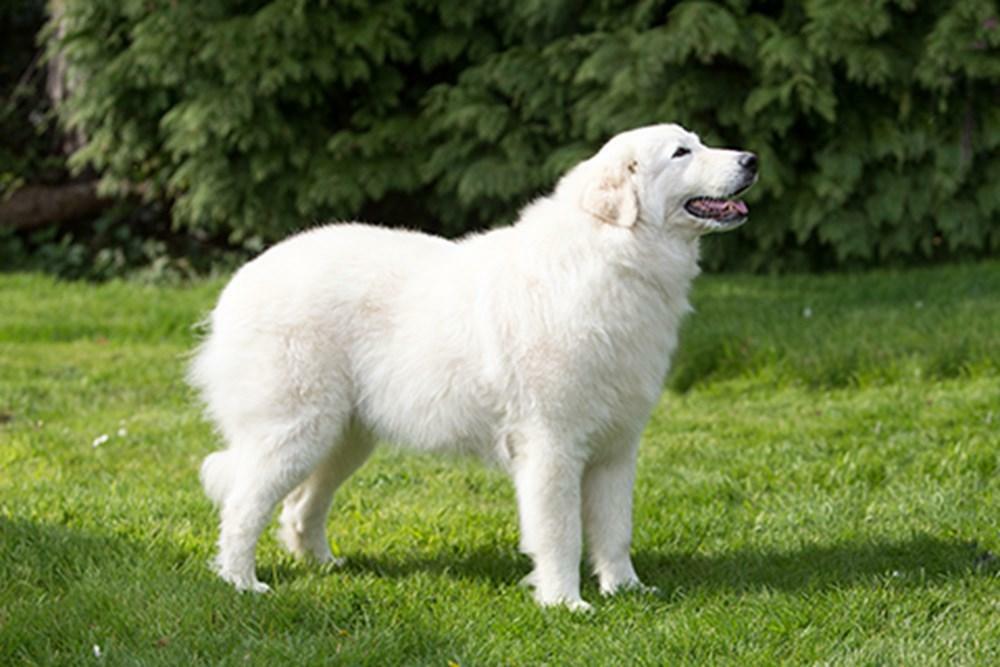 The Maremma Sheepdog is considered an “Old World” breed, sharing ancestry with other Eastern European livestock guarding dogs, especially mountain dogs such as the Pyrenean Mountain Dog and the Kuvasz. The origin of Maremma sheepdogs goes back at least to Roman times. Originally bred in Italy, they are still very popular there, and their original purpose continues: guarding livestock.Maremma sheepdogs are also known by many other names. Some of these names come from the idea that two varieties of these dogs used to exist in two different regions of Italy. In the 1950s, they were officially recognised as the same breed (Maremmano-Abruzzese). Other names for these dogs are:Although they are purebred dogs, you can find them in shelters, so if you are looking to add this dog to your family, opt to adopt, thus saving both your life and the life of whoever makes room for you in the shelter.Maremma Sheepdogs are very dedicated to their work, so they would fit best in a farm environment where they can care for livestock. Bred to be independent thinkers, these dogs are protective and self-confident, although they are not easy to train or socialise. Their large size and free spirit also require plenty of outdoor space to roam with fences to prevent them from wandering too far. If these dogs are socialised at an early age, they can become good family dogs, although they still need plenty of space and training. They get along well with other dogs and with their own human family, but not with strangers or anyone with whom they are not familiar, so they are also suitable as guard dogs.

Maremma Sheepdogs are white in colour, with some variation in shading permitted. Their coat is long, thick and harsh. Maremma Sheepdogs are known to get along very well with children in their own family. They can have problems with children outside the family, as they do not get on well with strangers, and will be particularly protective of the children in their family. It is a good idea to have a space prepared to confine your Maremma if you are expecting company. Maremma sheepdogs are great guardians of all types of animals, not just sheep. Their ideal environment would be a farm, where they can put their genetic gifts of guarding livestock to good use. They can get along well with cats and other dogs, including other Maremmas, especially if there is no more than one dominant dog in the relationship.Maremma Sheepdogs are loyal do best when allowed plenty of room to be active and independent. Early training and socialisation can help them adapt to their home and family, but be aware that, although they are not particularly destructive or mischievous, they are independent thinkers.

Maremma sheepdogs date back at least to ancient Roman times, 2000 years ago, and possibly earlier. They are closely related to other livestock guarding dogs of Eastern Europe, and are all believed to be descended from the Tibetan Mastiff, a breed that dates back more than millennia. Archaeologists have discovered bones from this type of livestock guarding dog alongside cattle bones dating back 6,000 years.Maremmas were bred in two distinct regions of Italy for the express purpose of guarding livestock. This is slightly different to being herding dogs, as the Maremmas were responsible for keeping their flocks safe from predators such as wolves, and indeed they are well known for doing so, with the nickname “wolf killers”. This is also why they like to spend so much time outdoors; their ancestors lived and slept with the livestock outdoors, rather than living comfortably indoors.World War II was a difficult chapter in the history of Maremma sheepdogs, as invading German soldiers often shot at these dogs. This, coupled with the fact that the wartime terrain is not ideal for breeding dogs, caused the breed to almost disappear. Beginning in the 1970s, government agencies around the world began to use Maremma Sheepdogs in areas where they wanted to protect livestock, or even wild animal populations, from predators, using non-chemical means. A single Maremma sheepdog is credited with saving the little penguin population on an island in Australia, after many other attempts, and even other dogs, failed to keep away the invading red foxes and predators that were killing the penguins. Thanks to the Maremma, the population has increased.