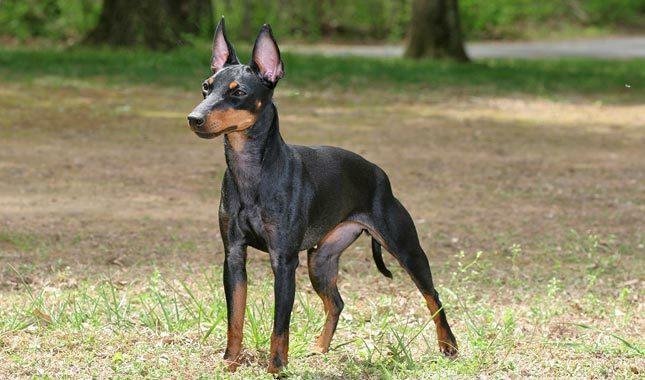 The lively and spirited Manchester Terrier dog breed is a true terrier. Bred in Manchester, England, to hunt rats and rabbits, this dog has game and loves to show it. The Gentleman’s Terrier (as they were known in Victorian England) is not a hunting dog, but loves a good chase. This makes them a flyball and agility star. Although these are purebred dogs, you may find them in the care of shelters or rescue groups. Remember to adopt. Don’t go shopping if you want to take a dog home.Although its appearance may remind you of a miniature Doberman Pinscher or a large miniature Pinscher, the Manchester Terrier is a canine all its own. It is a small, loud-barking dog with a big personality: it is loyal, friendly and an excellent watchdog that loves to be with its people. Among terriers, the Manchester is known to be one of the most polite and responsive breeds, and today is an excellent companion who knows how to hold his own in conversation.

Life expectancy can be up to 15 years.Manchesters can become obese if overfed and under-exercised.They can be found in two sizes: small and smaller.They excel in sports such as agility, obedience and rally.They make great watchdogs and will bark enthusiastically if not trained to be quiet on command.Manchester Terriers can be stubborn and difficult to housebreak. Manchester Terriers can be stubborn and difficult to housebreak, so crate training is recommended. Care should be taken in off-leash or unsecured areas; when their hunting instincts kick in, training goes out the window. To get a healthy dog, never buy a puppy from an irresponsible breeder, puppy mill or pet shop. Look for a reputable breeder who tests their breeding dogs to make sure they have no genetic diseases that can be passed on to puppies and that they have a sound temperament.

Many people think that the Manchester Terrier is a small version of the Doberman. But they are not. Louis Doberman used Manchesters to breed the larger Doberman, and Miniature Pinscher experts say their breed has no shared heritage.Manchester Terriers are considered by many to be the oldest of all identifiable terrier breeds. They are mentioned in books dating back to the early 16th century.Manchester Terriers served an important function in England. In the early 19th century, sanitation was poor and rats were a threat to health. Rat-killing was a popular sport, and an enthusiast named John Hulme crossed a Whippet with a Black and Tan Terrier to produce a dog that excelled at it.Even after the sport was banned, the little Terriers had plenty of work to do in the country’s public inns, most of which were infested with rats. The inns used to have kennels with the terriers and, after closing for the night, the workers would release them into the dining rooms to catch the rats.The breed acquired a reputation for great spirit and determination when faced with an enemy even twice their size. Billy, a Manchester in the 1820s, is still remembered for killing 100 rats in just 12 minutes. The Manchester district of England was the centre of breeding for these small Terriers in the mid-19th century, and so they were given the name Manchester. The public wanted dogs of even smaller stature, so some breeders crossed their dogs with Chihuahuas to further reduce their size. This caused numerous problems, notably thin coat, apple-headedness and bulging eyes.Very small, though delicate and unhealthy Manchesters (and up to two and a half pounds), were popular for many years in the Victorian era. Some owners had specially designed leather pouches made to suspend from their belts and carry with them when riding, earning them the nickname “groom’s pocket piece”. However, even the smaller Manchester Terriers retained their fighting spirit, and in 1937, the British Manchester Terrier Club was formed. Its members were instrumental in saving the breed from extinction after World War II.