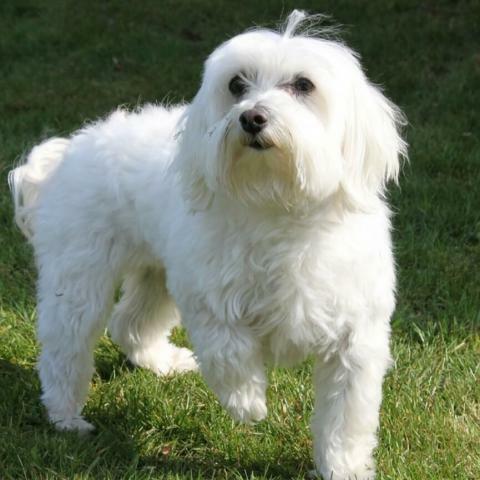 A gentle and fearless breed of dog, the Maltese greets everyone as a friend. Their glamorous white coat gives them an appearance of haughty nobility, but looks can be deceiving, and although they are purebred dogs, you may find them in the care of shelters or rescue groups. Remember to adopt. It is an agile and vigorous dog that excels not only as a companion, but also as a therapy dog and competitor in dog sports such as agility, obedience, rally and tracking. But most of all, they love to be with their people. Even novice pet parents and flat dwellers will find these puppies to be excellent furry family members.

Although your Maltese will want to please you, it can be difficult to housebreak. Crate training is recommended.Maltese are prone to chills, especially if they are wet or walking in damp areas.If your Maltese has long hair, he may get sunburns on the skin where the hair separates on the back.Because of their small size and delicate build, Maltese are generally not recommended for homes with small children.Some Maltese have delicate digestive systems and may be picky eaters. If your Maltese has dental or gum problems, he may have feeding problems. If your Maltese shows discomfort when eating or after eating, take him to the vet for a check-up.To get a healthy dog, never buy a puppy from an irresponsible breeder, puppy mill or pet shop. Look for a reputable breeder who tests their breeding dogs to make sure they are free of genetic diseases that can be passed on to puppies and that they have a sound temperament.

The Maltese dog is one of the oldest toy breeds, with a history dating back at least two millennia. Artists, poets and writers immortalised this little dog in the early great cultures of Greece, Rome and Egypt. They were even mentioned by Aristotle. The Greeks erected tombs for their Maltese dogs, while depictions of Maltese dogs on Egyptian artefacts suggest that they were prized by that ancient culture. The Egyptians and, centuries later, many Europeans, believed that the Maltese had the ability to cure people of disease and would place one on a sick person’s pillow. This inspired one of its names: “The Comforter”. Even before the Christian era, the breed was widespread in Mediterranean cultures. Despite its prominence in history, the exact origin of the Maltese dog is uncertain. Many believe that the breed developed on the island of Malta in the Mediterranean Sea from Spitz or Spaniel type dogs. Others believe it developed in Italy, and still others believe it originated in Asia and that it was involved in the development of many of the smaller Asian dogs. By the 15th century, it had found a safe place in the arms and hearts of French aristocrats. During the reign of Henry VIII, the Maltese arrived in the British Isles. By the end of the 16th century, the Maltese had become the favourite pet of noble and royal ladies. The little dog was a favourite of Queen Elizabeth I, Mary Queen of Scots and Queen Victoria. Numerous painters, such as Goya and Sir Joshua Reynolds, included these little dogs in their portraits of beautiful women.Although it survived the fall of the Roman Empire and the Middle Ages, the Maltese was nearly destroyed in the 17th and 18th centuries when attempts were made to breed it to be the size of a squirrel. After this almost disastrous experiment, breeders mixed poodles, miniature spaniels and East Asian miniature dogs with the breed to save it. The result was that the Maltese became so varied that several new breeds were formed. Many believe the Maltese to be the direct ancestors of the Bichon Friesian, Bolognese and Havanese breeds, and English breeders developed the Maltese as we know it today. Many of the Maltese found in the United States today have their origins in English imports. Maltese first appeared in the USA in the late 19th century. The number of Maltese dogs registered with the AKC grew very slowly until the 1950s. Since then, the breed has become very popular. Maltese are one of the most popular breeds with dog show spectators, often winning the Toy Group. They also have an excellent record in the Best in Show competition.