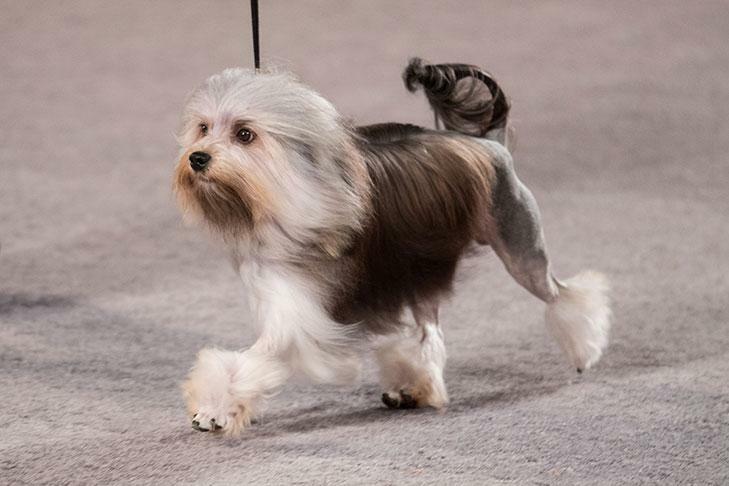 The Lowchen is a toy dog breed that was developed as a companion dog and is still in this role today. Active and intelligent, they do very well in dog competitions such as obedience and agility, and exceed the expectations many have for a family companion, although they are purebred dogs, you may find them in the care of shelters or rescue groups. Remember to adopt. Very affectionate and playful, these puppies adapt to almost any home environment, even flat living. However, they like to bark, something the neighbours don’t appreciate. But even novice parents will find Lowchens adaptable and easy to train with positive reinforcement.

The Lowchen was not developed to be an outdoor or kennel dog. They are companion dogs and are happiest when in the company of the people they love. They are excellent watchdogs with their alarm barking, but can become a nuisance to neighbours. It is to be expected to spend at least 20 minutes a day exercising him. Although the Lowchen does not shed much, it requires regular brushing and grooming to avoid tangles and mats and to keep it in good health.Although not all Lowchen exhibit this trait, many enjoy digging and the habit can be difficult to discourage. Lowchen can be shy around new people, and it is important to socialise them at an early age to discourage any fear or shy behaviour.Lowchens are companion dogs and can suffer from separation anxiety whenever their companions leave for the day. To get a healthy dog, never buy a puppy from an irresponsible breeder, puppy mill or pet shop. Look for a reputable breeder who tests their breeding dogs to make sure they are free of genetic diseases that can be passed on to puppies, and that they have a sound temperament.

There are several theories about the origins of the Lowchen, and the debate is often steeped in controversy. One theory states that the breed originated in Northern Europe, which includes Germany, Belgium and France. It is believed that the Lowchen may be one of the founding breeds in the development of the Toy Poodle or may be related to the founding breed, another theory is that the Lowchen is related to the Bichon breeds and originated in the Mediterranean. The third and possibly fourth theory is that the Lowchen may have originated in Russia or even Tibet. It may also have been used as a rodent hunter and possibly as a small alarm dog. We also know that Lowchen were owned by people of all social classes, and could be found both on farms and in castles, and that the Lowchen has been depicted in art throughout the world over the centuries and the present breed has not changed much from its appearance of centuries ago, and as the years went by, Lowchen became less popular, and by the end of the 19th century only a few remained. In 1897, a breeder named Madelaine Bennert made an effort to save the Lowchen from the brink of extinction. Madame Bennert resumed her efforts to save the breed and spent the years after the war searching for Lowchen lines that had escaped the war. With the help of Dr. Hans Rickert, whose dogs were originally purchased from Madame Bennert and who helped make the breed what it is today, and a few other owners and breeders, the Lowchen was able to recover as a breed, although still rare today, the Lowchen has a secure future. The first Lowchen came to the United States in 1971, and the AKC recognised the breed in 1999.