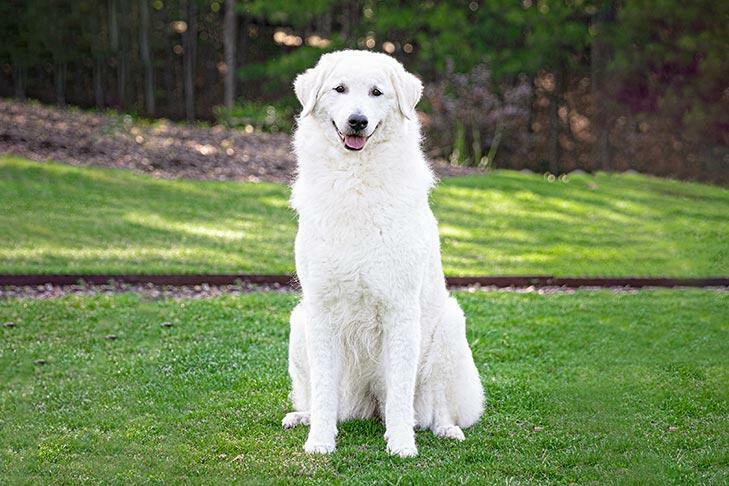 The Kuvasz is a large, white, herd-guarding dog, originally from Hungary. It is a single-family dog, protective of its people and wary of strangers. The plural of Kuvasz is Kuvaszok in his mother tongue, Hungarian. Although it is a purebred dog, it is possible to find them in shelters and rescues. Remember to adopt. Don’t buy if you want to take one of these puppies home.Kuvaszok are big and protective, but they also have a sensitive side. They do not like to be away from family for long periods of time, so they will not do well with an owner who leaves them in an empty house for many hours of the day. They also do not adapt well to flat dwellers, and need an experienced owner who can give them plenty of room to run around. However, if you have a large home and are up for the challenge, this puppy will make an excellent watchdog, an intelligent exercise companion, and a loyal best friend for life! AniMall24 recommends a large, roomy crate to give your big Kuvasz a place to rest and relax. You should also buy a dog water bottle for any outdoor adventures you have with your pup.

Kuvaszok need a confident and experienced owner who earns their respect and understands their independent nature. It is recommended that they be brushed at least once a week, and preferably every two or three days. Like many large dogs, the Kuvasz can develop joint problems if over-exercised while growing up. Do not push your Kuvasz to over-exercise, jump excessively or go up and down stairs too often until after his second birthday.Kuvaszok are wary of strangers and can be overly protective. Obedience training is a must when owning a large guard dog such as a Kuvasz. Although quite self-sufficient, a Kuvasz does not like to be separated from its family. Like all dogs, they should not live alone in the backyard. Your Kuvasz can become aggressive and frustrated if it is caged, tied or chained. This is a breed that needs to run. They need a large, fenced yard as well as a long daily walk or run once they are physically mature.Kuvaszok are intelligent and like many guard dogs, they think for themselves. Training can be difficult and requires a lot of patience, time and consistency.although they are very gentle with children if they have been raised with them, Kuvaszok puppies can be unruly and may accidentally knock over a small child.your Kuvasz may consider any child that is not one of their family to be a threat. Choose to be safe rather than sorry and, when other children come to play, watch your Kuvasz carefully or put them in a safe area.Never allow anyone to scold your Kuvasz. If they feel that the person scolding them is not “worthy” to do so, they will resent it.

The Kuvasz is perhaps the oldest of the three ancient Hungarian dog breeds, the other two being the Puli and the Komondor. They may have arrived with the Magyar tribes that invaded Hungary some 1200 years ago, but one Hungarian dog historian claims they were there many centuries before. Another theory suggests that it comes from a Sumerian word, ku assa, which refers to a dog that guarded and ran alongside horses and horsemen. Whatever its origin, in the 15th century kuvaszok were highly prized in Hungary as guard dogs, especially by King Matthias. Matthias was crowned on 29 March 1464, when he was only 15 years old. Despite his youth, Matthias was a shrewd and wise military leader. He created a large army of mercenaries that was able to push back the Ottomans and expand the possessions of the Kingdom of Hungary. As was to be expected in such turbulent times, palace intrigues multiplied. Conspiracies and assassination attempts were commonplace. It was a time when a king could not trust even his own family, but Matthias felt safe as long as his kuvaszok were around. It is said that he carried a pair of Kuvaszok everywhere, even to his sleeping quarters. Matthias built huge kennels to house hundreds of Kuvaszok on his Siebenbuergen estate. In addition to protecting the king, these dogs were used to guard the livestock on the estate and sometimes to hunt big game such as bears and wolves. Kuvaszok were highly prized, and sometimes King Matthias would give a puppy as a gift to a visiting nobleman. Kuvaszok were highly prized, and sometimes King Matthias would give a puppy as a gift to a visiting nobleman. Vlad (also known as Vlad the Impaler, for his preferred method of torture) was a vassal of King Matthias at various times. At one point, King Matthias imprisoned Vlad in a royal tower for many years. Vlad regained the king’s sympathy and, after his release, married a member of the royal family, probably a cousin of King Matthias. After the death of King Matthias, the popularity of the breed declined among royal and noble families, but its traditional role of protecting livestock for farmers and horsemen continued. In the late 19th century, breeders became interested in standardising the breed. In the 1920s and 1930s, the Kuvasz became the most fashionable large dog in Hungary and Western Europe. Food shortages took their toll and many kennels reduced or stopped breeding. When Nazi, and later Soviet, soldiers came through Hungary, the brave Kuvaszok were often shot as they tried to protect their families and livestock. Some officers took Kuvaszok home, but even so, the breed was nearly wiped out. Many Kuvasz breeders had died. The Russians occupying Hungary regarded dog breeding as a luxury pastime of the aristocrats and punished the breeders, but despite these difficulties, the breeders met in secret, selling puppies and dogs in exchange for cigarettes and food. But as food remained scarce, kuvaszok, like other large breeds with big appetites, were not popular.Since the Hungarian Revolution of 1956, conditions have steadily improved in Hungary, and kuvasz have begun to regain their popularity. Today, there are active Kuvasz breed clubs all over Europe. However, it has been a struggle, because the near extinction left a very small gene pool with which to rebuild the breed, forcing some breeders to use other dogs, such as the Great Pyrenees, to continue their programmes.Kuvasz were first shown at a dog show in 1883, when Count d’Esterházy, a great supporter of the breed, exhibited two Kuvaszok in Vienna.In 1884, the first Hungarian standard for the breed was written. In 1931, the first Kuvasz was registered in the USA. The Kuvasz Club of America (KCA) was established in 1966 and was granted official breed club status in America by the American Kennel Club in 1993.