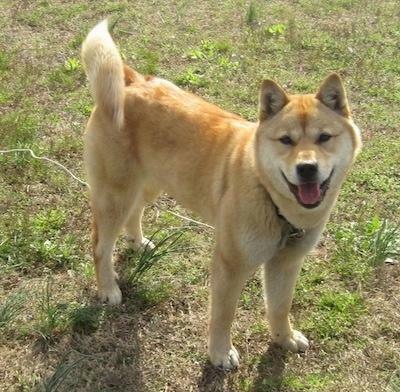 Originally from South Korea, the Korean Jindo Dog shows unmatched loyalty. They are also incredibly intelligent dogs, with a knack for hunting, tricks and even agility. Jindos require good training, patience and lots of walks. However, this makes them a good choice for active individuals and families who have enough time to let their wonderful personalities shine through. If you want a loyal friend who learns quickly and loves everyone in your household, the Korean Jindo Dog may be the one for you.

The Jindo breed originates from the island of Jindo in South Korea and was brought to America by Korean expatriates. Known for their bravery and loyalty, this breed is accurately represented by a single heartwarming story. In 1991, a Jindo named Baekgu was sold and transported over 187 miles. He returned to his original owner more than seven months later, emaciated and near death. This story is so popular in Korea that it inspired cartoons, a documentary and a storybook, and with this story and others, the Jindo are revered in Jindo province. In fact, anyone visiting the area is greeted with a statue of their namesake dog. Jindo were originally used as hunting dogs in their native country because of their prey instinct and strict loyalty. Despite this propensity, the AKC has classified this breed in the non-sporting group, suggesting that they do not require frequent and significant exercise. If left alone for long periods of time, a Jindo will find a way to entertain itself (and not always in the most productive way). Young Jindos have been known to destroy furniture, knock over small objects and even climb walls and fences when left alone for too long. This same intelligence is a double-edged sword when it comes to training: they are able to learn even complicated commands quickly, but their intelligence can lead them to be a little stubborn. Nevertheless, the Jindo is a great pet for active owners who have the time to invest in this unique breed. They show great loyalty to their owners, which makes them great companions, and they are quite reserved with strangers, which also makes them effective watchdogs. In fact, they are such good watchdogs that the Korean military often uses them as guard dogs for military bases, and because of the energy and agility of these dogs, they are best suited when they have access to the outdoors at least part-time. But beware: any fence must be at least 15 cm if a Jindo is to be contained. The Jindo is known for its loyalty and is therefore easy to train. However, these dogs command respect. The Jindo is known for its loyalty and is therefore easy to train. They are instinctively protective and can become aggressive towards strangers and other animals if not properly socialised. Jindo should not often be left alone at any age, although they are less likely to be destructive once trained. Jindo are a social breed that will become lonely, bored and even depressed if they have no contact with their owners. They need frequent walks to burn off their high energy, but their natural neatness and desire to be close to people makes them good indoor dogs. (They even groom themselves, like cats!) Jindos even look like great watchdogs. They have bright, alert eyes and erect ears, making them appear to be on guard at all times. The South Korean military uses them as guard dogs. Jindos are known to be apprehensive and even fearful of water. These dogs do not make good companions in the water. Some owners have even reported that their Jindos are afraid of rain. A Jindo will allow himself to be bathed by a trusting owner, but almost reluctantly. Needless to say, they make good hunting dogs. It is hard to overstate the popularity of the Jindo dog in Korea. The breed has been dubbed Korea’s National Treasure No. 53 and has its own research institution, the Korea Jindo Dog Research Institute. As a National Treasure, it is protected under the Cultural Properties Protection Act.

The official history of the Jindo is a matter of debate, as there is no written account. However, most experts agree that the breed has been in Jindo province for many centuries. There is no evidence of how the dog originated on the island of Jindo, although the most popular theory states that they may be descended from Mongolian dogs brought to Korea during the Mongol invasion of 1270 AD. Despite the many theories, there is evidence that jindos have existed in Korea for at least 1,500 years. In 1962, they were designated as the 53rd National Treasure. This status makes it difficult to export a pure breed outside of South Korea, although the first specimens of this breed appeared in the United States in the 1980s. Despite their rarity in the United States, they were recognised by the United Kennel Club in 1998, and the Jindo Dogs Guild of Korea is responsible for controlling the entire Jindo population. As of 2008, this organisation issues certificates to purebreds and the breed has long been known in Korea for its hunting ability. A herd of well-trained jindos is an invaluable asset to a hunter, who acts as the leader of the herd. Jindos hunt medium to large prey, sometimes independently of their owners. Because of these traits, the Jindo was appropriated by the military, police departments and even search and rescue teams. It was believed that their ferocity and high trainability would make them suitable for search and rescue positions. In 2009, Bak Nam-sun spoke in an interview about the Jindos’ unsuitability for search and rescue teams. It turns out that the dogs’ loyalty to a single owner was too strong for the multiple handlers of search and rescue teams. Also, their hunting instincts often interfered with search missions, and Son Min Suk stated in 2010 that German Shepherds made better military dogs. Again, the Jindo’s loyalty to its first handler or original home proved too strong to be effective in a military environment. That same year, the Los Angeles Police Department discovered the same problems after adopting four Jindos from South Korea; the dogs were too eager to please their first handlers and were easily distracted by it.Today, the Jindo remains highly respected and popular throughout Korea. Despite being unsuitable for military and police posts, these dogs remain loyal and intelligent pets for individuals and families alike.