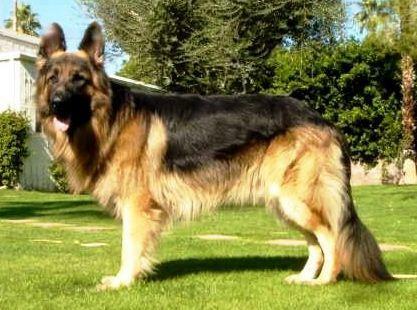 The Royal Shepherd is a loyal and hard-working companion dog. Self-confident and strong, its enormous size would be a rather large deterrent to any potential predator. King Shepherds are protective of their families, but are not aggressive dogs. The King Shepherd is a combination of several possible breeds, but must include the German Shepherd. Most often, they are mixed with the Alaskan Malamute and/or the Great Pyrenees, and some older lines go back to the Akita. Although they can be intimidating in size, they are affectionate and loving.German Shepherds are versatile. This highly intelligent dog can perform a wide variety of jobs, from herding sheep to escorting children, to police dog, to rescue work, to guide dog. They get along very well with other dogs, but early socialisation is an important factor in raising a sociable and friendly puppy, and they can live in a flat as long as they get plenty of exercise and room to stretch their legs. These dogs can get quite large, so while they can live in a flat, a house with a large yard might be a more ideal setting.AniMall24 recommends a large, spacious crate to give your large King Shepherd a place to rest and relax. You should also buy a dog water bottle for any outdoor adventures you have with your pup.

The Royal Shepherd is a hybrid breed of dog. They are a mixture of many different breeds, but always have German Shepherd ancestry. The main colours of Royal Shepherds are fawn, red, black, brown and sable, and their coat is usually a combination of two or more colours. A good brushing three times a week is probably sufficient, in addition to other necessary care.King Shepherds get along very well with children, especially those they have been raised with. They also get along well with dogs and other domestic animals, including cats. Early socialisation is an important factor in the development of a sociable dog.King Shepherds are highly trainable and thrive on positive reinforcement. Do not leave them alone for long periods of time. They can easily become bored, depressed and frustrated, which can lead to undesirable behaviour.

The King Shepherd was developed in 1990 by the Americans Shelley Watts-Cross and David Turkheimer. This hybrid is a mixture of German Shepherds with other breeds, such as the Great Pyrenees, Alaskan Malamute and sometimes Akita. Breeders wanted to create a dog similar in nature and appearance to the German Shepherd, but larger and with fewer genetic health problems.This dog comes from a lineage of working parents and needs to be kept busy to be happy.Although the hybrid was in development in the early 1990s, it was not officially established until 1995, when a King Shepherd breed club was created.The King Shepherd is currently recognised by:American Rare Breed Association (ARBA) American King Shepherd Club (AKSC)American Pet Registry, Inc. (APRI)Dog Registry of America, Inc. (DRA)Eastern Rare Breed Dog Club (ERBDC)States Kennel Club (SKC)World Wide Kennel Club (WWKC)