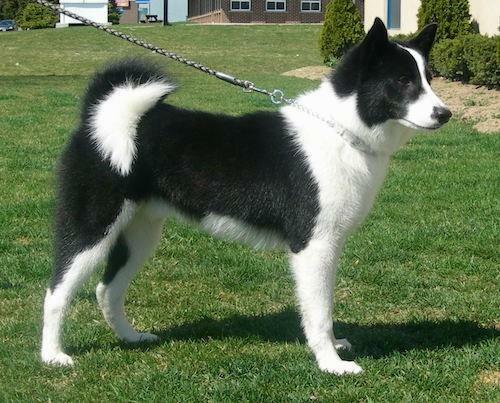 The Karelian bear dog, called Karjalankarhukoira in its native Finland, is a strong, alert and fearless breed, capable of hunting or treeing small and large, even aggressive, animals such as bears, lynx, wild boar, wolves and moose. It is part of the list of the ten most common dog breeds in Finland, where people consider them a national treasure.Karelian bear dogs were bred to be naturally aggressive towards other animals for hunting. For this reason, a good deal of socialisation and training is needed to keep them as domestic pets. However, Karelian bear dogs are extremely loyal to their families and are very protective watchdogs. Therefore, for an owner willing to put in the work, socialise, train diligently, and give plenty of open space and physical activity, the Karelian Bear Dog can be a calm and loving family member.

In Finland, where the breed originated, it is sometimes spelled “Carelian Bear Dog” with a “C”. It is also called Karjalankarhukoira in Finnish.The Karelian Bear Dog was bred to hunt even large and aggressive game such as bears, lynx, wild boar, wolves and moose.This breed is naturally aggressive with other animals, so a good deal of socialisation will be needed if it is to be kept as a household companion. In the United States, Karelian bear dogs have been used in Yosemite and Glacier National Parks for bear control, as well as by the Washington State Department of Fish and Wildlife. Karelian bear dogs are still prized by big game hunters, but for those who want a domestic pet, they also make excellent guard dogs.The ancestry of the Karelian bear dog dates back to Neolithic times, according to archaeological finds, when dogs similar to the modern breed followed human settlers into the regions of Scandinavia and Europe.

The Karelian Bear Dog is a Spitz-type breed with an ancestry that goes back a long way. In fact, archaeological records suggest that dogs similar to the modern Karelian Bear Dog existed in northeastern Europe and Scandinavia since Neolithic times, and it is likely that they followed the first human settlers in the area thousands of years ago. The inhabitants of the region depended on successful hunts for food and survival, and Karelian bear dogs were bred to assist in this task. They were used primarily to hunt squirrels, hares and other small game, but were also capable of hunting large, aggressive animals. Two Karelian bear dogs could easily tree a bear and bark at it until their human could reach it and knock it down. The breed had to be hardy to withstand the climate and wildlife of the region. These dogs are still used to hunt moose and other large animals in Scandinavia. Originally, the coat of Karelian bear dogs was of many colours, such as wolf-grey, red or black and tan, although modern breed standards have made their coat mostly black and white. Karelian bear dogs almost became extinct after World War II. In fact, all Karelian bear dogs alive today can trace their ancestry back to 40 dogs that were saved during that time. Since then, the breed has become more popular and, in addition to being one of the ten most common breeds in Finland, Karelian bear dogs are also bred in North America and other countries in Europe.